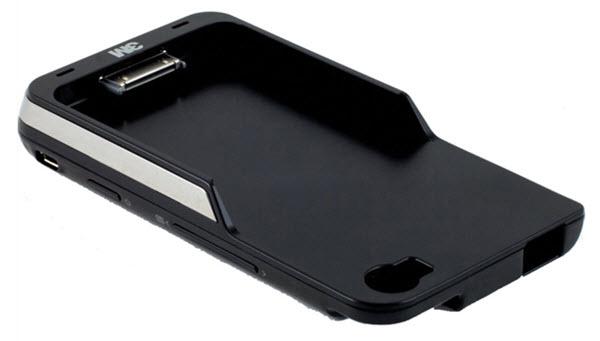 Convenience and portability are common attributes of pico projectors. Pico projector sleeves take those traits to the next level. They cling to your iPhone like a high tech protective case, but rather than absorbing the impact of a fall, they can project your favorite episode of Downton Abbey onto the wall. It's all about priorities. Other than for charging the device, you do not need to haul around any cords or cables which makes these pico projectors ideal for busy parents and unorganized college students.

Previously I reviewed the Brookstone Pocket Projector for iPhone. Recently, I had the opportunity to slide my iPhone 4s into the 3M Projector Sleeve. With a native resolution of 640 x 480 (VGA) and a lumen rating of ANSI 35, this device brings a sense of style to the projector sleeve market.

The 3M Projector Sleeve is packaged with a USB cable for charging and a quick start guide. I always appreciate short and illustrated instructions. The USB cable can be used with your Apple power adapter or the USB port on your laptop. Initially, the battery took about two and half hours to fully charge using my iPhone's power adapter. You can gauge your battery life by watching the LED lights on the back of the sleeve.

In order to dock my phone into the projector's connector, I had to strip my iPhone of its protective case. The dimensions are 4.96 in x 2.68 in x .79 in, and the weight is roughly 4.4 ounces. With the exception of adding more depth, the projector is almost the same size as your iPhone 4/4s. Often, projector sleeves can remind me of bulky chalkboard erasers with an area cut out for the phone. I was impressed, however, with the 3M Projector Sleeve's sleek look and the faux chrome it sports that adds a bit of bling to the edges.

The 3M Projector Sleeve can be used with most of the video-based apps available on your iPhone 4/4s. I used it primarily with Netflix and YouTube. After charging and initially setting up the projector, I settled in with a bowl of popcorn and streamed The Signal projected at 54 inches diagonally. I was sitting roughly 65 inches from the wall. With projector sleeves like this, your best viewing experience comes when sitting within six inches of the projector itself.

The 3M Projector Sleeve has three different modes: Cinema, Web, and Eco. With The Signal, I used the Cinema mode, which helped to enhance the color. The picture was clear, and the characters were defined. Still, 35 lumens cannot stand up to any outside light. Draw the curtains, or find an underground bunker. I used the Eco mode setting of the projector when watching the Constant Gardener. Although this mode helps to conserve the battery, it does dim the projector. I decided to watch the movie at the largest recommended size of 60 diagonal inches. I sat 75 inches from the projected image. I noticed that the borders of the images were slightly blurred, and the coloring was not as vivid as it was in Cinema mode. Instead of having a sharp and crisp look, the images were softer and less defined. However, the battery did last for 105 minutes before I needed to free myself from my heated blanket cocoon and plug the projector back into the power adapter. Going 105 minutes without needing a shot of energy is impressive for anything or anyone.

Speaking of a shot of energy, the 3M Projector Sleeve, like the Brookstone Pocket Projector, can give your iPhone a quick charge when you are in a bind. Although it cannot fully charge your dead battery, it can buy you a few extra texts to your friends. Also, this sleeve can be used to show off your family photos and videos to your unsuspecting guests. I found that I had to do this in a slideshow format in order for it to be projected. Sadly, my friends had to sit through every picture on my phone, not just the ones from my latest vacay.

While this projection device is enjoyable, there are notable drawbacks. First, it has been manufactured for use with the iPhone 4/4s and has a 30-pin connector; those with the new iPhone 5 cannot use it. Eventually, it will become obsolete as everyone slowly makes the switch to the new iPhone. Second, after roughly 45 minutes of projecting a movie, the sleeve and iPhone both became hot. In the manual, it states that moderate heat is normal. On a scale of Joaquin Phoenix to George Clooney, I would rate it somewhere around Ryan Gosling--it gets very hot, even with an internal fan. Finally, like many picos before it, this projector uses the audio from your iPhone. When watching a movie with more than yourself and your dog, the audio simply does not cut it. Fortunately, I was able to use my Matrix Audio One Bluetooth speaker to amplify the sound. This 3.5 W speaker is about the size of a tennis ball and does not require wires. It is truly the perfect companion to these types of smartphone projector sleeves (not to mention it makes your iTunes sound amazing). Plus, you can use it to answer your phone if someone calls in the middle of your movie.(Now you have no reason to get off of the couch). Throw the projector sleeve in one pocket and save room for this speaker in the other.

After spending four weeks with the 3M Projector Sleeve, I found that it is best suited for a life of casual entertainment and impromptu gatherings. With a native resolution of 640 x 480 and a brightness rating of 35 lumens, it will not impress everyone. However, it offers a slightly higher resolution and lumen count than the Brookstone Pocket Projector for iPhone 4/4s. The effort is noticeable and appreciated. At a retail price of $230, this projector is worthy of consideration if you are not planning on upgrading to the new iPhone in the near future. It offers a clear picture with some added flare and attitude. This consumer has a shiny new gadget riding shotgun to her beloved iPhone 4s.

For more detailed specifications and connections, check out our 3M PS4100 projector page.

Comments (1) Post a Comment
Elaine Tait Posted Mar 13, 2013 2:06 PM PST
Great information about the projector only suited for the iPhone 4/4s, something to consider. Also the heat factor.