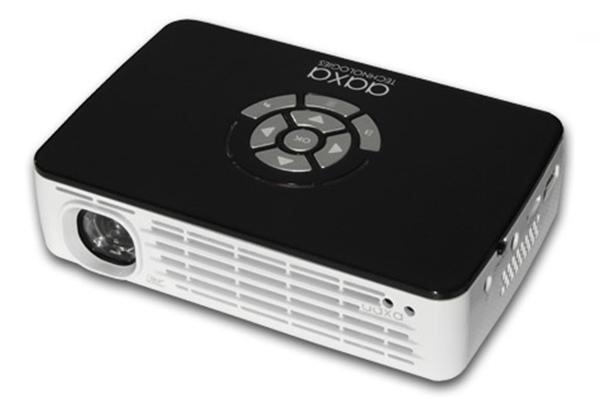 AAXA touts the P300 as the world's brightest battery-powered HD projector, which may well be true at this writing at least. It's certainly battery powered, although the battery is optional, and the 1280x800 native resolution establishes its claim for 720p HD. Its measured brightness is lower than its 300-lumen rating for AC power or 160 lumens with the battery, but it's brighter than any other battery-powered projectors I've seen. So if it's not actually the brightest, it's in the running. That's more than enough to make it interesting, at $419 street, plus $19.99 for the battery.

In many ways, the P300 is similar to any number of other 300-lumen projectors that are also built around LEDs paired with a 1280x800 DLP chip. In each case, portability is a key selling point. The P300, for one, weighs less than a pound without its power block and can read files directly from a MicroSD card or USB memory key, so you can leave your laptop at home.

That said, the battery option is enough to separate the P300 from the pack by freeing you from needing a power outlet. If maximum portability is what you need, that gives the P300 a distinct advantage.

Reasonably good data image quality. Data image quality for the P300 is good enough for most purposes short of reading small-size text or making out fine detail on screen. It offers eye-catching colors in all modes and excellent color balance, with suitably neutral grays at various levels from black to white in every mode.

One unusual issue, which I've rarely seen with other projectors, is that text was noticeably easier to read with an HDMI connection than with VGA. With VGA, both black text on white and white text on black were readable at 9 points, but reading took a little effort because of an apparent soft focus. With HDMI both were easily readable. A close look at the screen from a foot away showed that the characters were actually better formed with the digital connection.

The projector did well on both posterization and shadow detail, with only the slightest hint of either problem and only in scenes that most data projectors have trouble with. Arguably the most serious issue is that colors in the range of red are a little off, tending to be a bit oversaturated and either a touch too magenta or too orange. However, few people will be seriously bothered by it.

Few rainbow artifacts. One potentially key advantage for the P300 for anyone who sees rainbow artifacts easily, as I do, is that it shows very few of them. The only time I saw them with data images was with one test screen that's designed to bring them out. With video, I saw them in one color scene that also tends to bring them out, and in a black and white clip. I also saw some occasional hints in other scenes, but only rarely. In most scenes they didn't show up at all.

Highly portable. Weighing 0.8 pounds by itself, 1.0 pounds with the battery, and 1.3 pounds with the battery and power block, the P300 is light enough to bring with you without a second thought. It's also small enough, at 1.5" x 5.9" x 3.8" (HWD) to fit into a briefcase or laptop bag easily. And because it can read a variety of file types directly from a USB memory key or MicroSD card, including JPG, BMP, and TXT in my tests, you don't need to carry a computer or other bulky image source.

At least as important is that with the optional battery, the P300 can do something that none of it's most direct competition can do, namely: work without a power outlet. According to AAXA, a fully charged battery will last for more than 60 minutes.

One oversight is that AAXA doesn't ship the P300 with a carrying case, which is something you might want both to carry the projector and help keep everything together, including the power block, credit-card size remote, adaptors, and other items you might want to carry with it.

Low running costs. As with most of its competition, the P300's red, green, and blue LEDs are meant to last the life of the projector, eliminating the need to buy replacements. AAXA rates them at 15,000 hours.

Brightness. Our test sample of the P300 was substantially less bright than its 300-lumen rating. With the projector plugged into a wall outlet, I measured it at 148 lumens in its brightest mode, or 49% of the rating, and 136 and 70 lumens in its other preset modes. As a small plus, thanks to its RGB light source, it delivers the same color brightness as white brightness. When it's running from the battery, however, the brightness drops by about 33% in each mode, to 99, 91, and 47 lumens.

Given the rule of thumb that you want an image brightness of 16 foot-Lamberts (fL) in theater dark lighting and 40 to 50 fL with moderate light, and assuming a 1.0 gain screen, the measured brightness makes the P300 suitable in its brightest mode for a 54" diagonal image with the lights off or a 30" to 34" image with moderate ambient light.

Good brightness uniformity. The projector earned a high score for brightness uniformity in my tests, at 81%. However, the change in brightness happens over a short enough distance so that on a solid white or color screen it's easy to see that the center area is brighter than the sides. With the test unit, the brightness also dropped noticeably over an even shorter distance in one corner, which is outside of the designated ANSI test points, so it's not reflected in the measurement. Even so, with the screen broken up by text or graphics, the changes in brightness are hard to see. It is unlikely that anyone will find them distracting.

Low audio volume. The P300's 2-watt speaker isn't loud enough to hear from even few feet away. If you need sound, plan on using a headset or external sound system.

No zoom. As with most small projectors, the P300 leaves out a zoom control, so the only way to adjust the image size is to move the projector.

Hard to focus. The focus thumbwheel on the P300 changes focus a lot with very little movement. It's not hard to get the focus close to its best setting, but it's far too easy to overshoot and wind up merely close to the best.

Battery is hard to install. If you get the optional battery (which you should), be sure to order it with the projector, and make sure it will come installed. The battery connector, which is on a wire, is hard to plug into the projector unless you have a pair of long needle-nose pliers with a right angle bend in the tip. I tried it twice with two different projectors, using standard long needle-nose pliers, and found it highly frustrating both times.

Scaling artifacts. One image quality issue the P300 shares with most directly competing projectors is scaling artifacts. Even with 1280x800 image, it adds unwanted extra patterns to large areas filled with repeating patterns of fine lines or dots.

Scaling artifacts shouldn't show up when the input signal is at the projector's native resolution, but I've seen them with every projector I've tested that uses the same DLP chip as the P300. As I've reported in other reviews, Texas Instruments says that there is no scaling. However, it also says that the issue is likely due "in part" to the chip's architecture, although it hasn't provided an explanation beyond that.

The good news is that unless you use patterned fills in your graphics instead of solid blocks of color, you probably won't see these artifacts. If you show any images with closely spaced lines or dots, however, you will almost certainly see them.

The P300 shares many of the same advantages as competing models rated at 300 lumens, and it fits in the same general category. Compared with pocket projectors, it's larger and heavier, but still small and light enough to take up very little room in a briefcase or laptop bag so you can carry it without much effort. And although its brightness on our tests was significantly lower than its rating, it's still enough brighter than a pocket projector to give you a noticeably larger usable image with any given lighting conditions.

The big advantage of the P300, and the main reason to consider it, is its ability to run on batteries. Other projectors with a similar size, similar connection options, and a similar ability to read files directly from memory are brighter. However, the P300 is the only one among its most direct competitors at this writing that can work without AC power. If you want the freedom to show images without being tied to a power outlet, that may well make the P300 your preferred choice.

For more detailed specifications and connections, check out our AAXA P300 projector page.

Comments (8) Post a Comment
thomas Posted Apr 30, 2013 6:55 PM PST
Could you write something about the sound level (fan noise) for the P300? Compared to some other devices. Or even better provide a recording of the sound.
mel Posted May 24, 2013 4:05 PM PST
Is this compatible with Apple macbook laptop computers? What are the requirements?
Christoph Posted Jul 16, 2013 10:40 AM PST
Hey I just have this thing for 4 month now. Perfect picture and very nice image quality but the fan noise is horrible. High leveled and too loud. Tried to replace the fan with a more quiet one but it detects the wront fan and shuts down. So I really want to replace this device because of the noise....
Ronnie Posted Jan 6, 2014 9:26 PM PST
Hi Mel! Yes, I own a MacBook Pro and have watched many things already with it! You will have to purchase an adapter which can be easily found on ebay for pretty cheap for the VGA port or the HDMI port (my preferred port as it gives you hd images and videos)

Would anyone happen to know why after an hour of operation the P 300 would shut off and the error red light flashes? I thought this unit overheated so I let it sit for an hour, try to turn it on and it automatically shut off. I also tried to charge it and the green indicator light would not come on. Could this be a charging adapter issue?

Can anyone chime in and help me out?

Joey
Cindy Posted Aug 9, 2017 8:54 AM PST
Joey - I've had the same issue. The projector goes off as if overheated and then doesn't stay on after cooling. I had another adapter in my bag and it was fine with that adapter. I tried others and only my spare would work. I plan to call the company.
Alan Langdon Posted Jun 14, 2019 6:45 PM PST
I am having the same issue with my 4+ . year-old P300. I have loved watching movies on it for years, a great projector overall, but in the last year or two the HDMI port has been flakey and today the AC adapter overheated and the projector turned off several times. Time to throw in the towel?