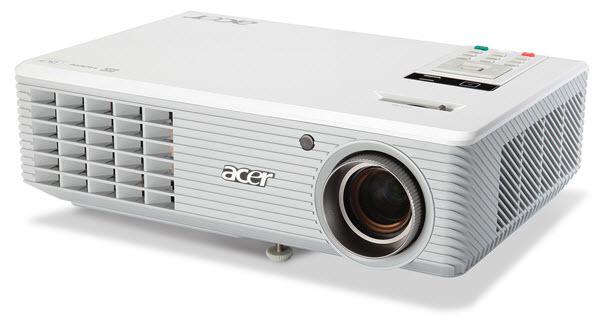 The Acer H5360 is a 1280x720 DLP projector that can project 3D material by way of a 120Hz input signal. With a brightness level near 2,200 ANSI-lumens, the H5360 is capable of supporting large screen sizes in theater lighting conditions and moderate screen sizes in environments that contain moderate levels of ambient light. It produces a bright, high impact image, and is well equipped to support a true big-screen 3D experience at a very low cost of ownership.

Brightness and Picture Quality: The Acer H5360 is rated at 2,500 ANSI-lumens and performed close to this specification. Our test unit measured 2,169 ANSI -lumens using normal lamp and the 'bright' image preset. This represents 86.8% of the published specification and was measured with slightly over 90 hours on the lamp. Enabling the 'eco' mode provides a noticeable reduction to fan noise and drops the light output to 73% of the standard mode. The H5360 produced 1,601 ANSI lumens with a combination of eco and bright settings. Brightness uniformity was average, measuring 73% in normal lamp mode and 69% in eco mode.

The H5360 performed well when tested with a variety of video, photo and presentation material. I did most of my video viewing in either the 'movie' or 'dark cinema' preset modes. I preferred the movie mode for HDTV and most film based Blu-ray material, but utilized the 'dark cinema' mode for content with a low average picture level such as the Blu-ray of True Blood, Season 2. The 'dark cinema' mode lowered the black level of the H5360 and helped to maintain shadow detail at the expense of some top end brightness. Brightness in 'movie' and 'dark cinema' modes measured 974 lumens and 623 lumens respectively. While this is a significant drop compared to the peak light output, the movie preset has enough light output to produce over 30 foot-lamberts on a unity gain 100-inch diagonal screen.

An additional advantage of the H5360 is its ability to synchronize to a 24Hz refresh rate and eliminate the need for 3:2 pull down when watching film based material. I did not measure the gamut of this display, but found the color reproduction to be somewhat oversaturated even in the 'movie' or 'dark cinema' presets. Acer states that the H5360 contains 'Acer ColorBoost' technology, but does not provide a direct adjustment for this setting. While the degree of distraction from the over saturation is highly personal, I found the H5360's color reproduction acceptable after a few clicks down on the saturation control.

3D Capability: The H5360 supports 3D display using either the NVIDIA 3D Vision system or the Texas Instruments DLP Link 3D system. I tested it with 3D gaming and using the NVIDIA system and with 3D Blu-Ray source material using the latest release of PowerDVD10 Ultra.

The NVIDIA 3D Vision system uses the EDID (Extended Display Identification Data) to identify if a display is supported. This led to some setup issues since my HDMI switch (a Denon AVR) does not pass through EDID data. So when the H5360 was connected through the Denon, the NVIDIA system did not recognize it as a supported display.

The H5360 switches to a specific image preset when the 3D mode is activated - it appears that this mode adjusts the color balance to take into account the slight color shift due to active shutter glasses. As is typical, switching to 3D mode results in a significant decrease in light output - the H5360 output drops to 698 ANSI-lumens in either the NVIDIA 3D or DLP Link modes. On the positive side, brightness, contrast, color and gamma controls can be adjusted to optimize the balance between shadow detail and black level when in either 3D mode.

I recently reviewed an XGA resolution BenQ projector that supports the NVIDIA 3D Vision System. The largest advantage of the H5360 in 3D, in addition to the easier setup, is the HD level resolution. The higher resolution of the H5360 and corresponding increase in detail accentuated the impression of depth and overall immersion into the game. I found the impact of 3D gaming on the H5360 very impressive.

A major limitation to evaluating 3D video performance to date has been limited source material. Up to my experience with the 3D Blu-Ray of "Cloudy with a Chance of Meatballs", all 3D video material was downloaded form the internet and suffered from low resolution or was highly compressed. Seeing properly mastered source material at the full bit rate provided by Blu-ray was simply the best 3D I experienced on the H5360. The excitement started from the opening frames, seeing the Columbia Pictures logo (the woman holding a torch and draped in the American Flag) extend into the screen was a great indication that this film experience was going to be something special. The Cloudy plot and animated content was a great fit for the 3D treatment; I feel that watching this film in 3D added to the overall experience. Early in the film, the protagonist attempts to 'generate' a cheeseburger using an invention of his own design. Viewing this scene in 3D bring a much greater sense of being in the action as object starts to materialize directly in the foreground. Comparatively, watching the same scene in 2D had a more observatory and disconnected feel.

However, the benefit of 3D is not without tradeoffs. A 720p display has less than one-half of the pixels as a full HD 1080p display. In addition, the light loss from the 3D mode and the light loss due to the active shutter glass system is significant. The glasses also had a noticeable impact to overall color fidelity when watching the Blu-ray content. Colors when viewing with the 3D glasses off were more saturated and crisper.

Ultimately, I found the negatives to be more of an issue with gaming as compared to the Blu-ray experience. I am not ready to give up 2D gaming at 1080p for 3D at 720p. However, I can honestly say that the 3D effect makes it a close call. This speaks well for the performance of the H5360 since I am comparing it to a 1080p projector at 3-4 times the price. Comparatively, I found the 3D experience that Blu-ray provides to be well worth the trade-offs. Given the opportunity, I would not hesitate to view new content in 3D using the Acer H5360. The experience of this relatively early stage of 3D Blu-ray was quite impressive.

Cost of Ownership: At under $700 from reputable on line retailers, the Acer H5360 represents a very low cost option for one's first step into the new 3D universe. It can easily support screen diagonals greater than 100 inches in theater lighting conditions. 3D flat screens at the 50-inch range are over double the cost of the H5360. So the H5360 represents a first-rate value considering a 100-inch diagonal image is over 4 times the viewable area of a 50-inch diagonal image. In addition to its low price, replacement bulbs can be found for around $200, which is lower than average for this class of equipment.

Input Options: The H5360 includes a VGA analog input and component, S-video and composite video inputs. It includes an HDMI input that will allow the projector to reproduce video and audio from a digital source. The sole analog audio input is a 3.5mm input jack. The H5360 also includes a Kensington security lock slot.

Limited Zoom Range and Fixed Offset: The zoom range on the H5360 is only 1.1x. At a ten-foot throw distance, it produces an image between 79 and 85 inches in width. Six inches of variable screen width is enough to accommodate small differences in planned versus actual mounting location, but significantly limits the placement flexibility for a given screen size and throw distance.

Image offset measured a reasonable 13.2% of screen height, comparing well to the 12% that is specified in the manual. In a tabletop configuration, the bottom edge of the image starts above lens center.

3D 'Notification' Pop-Up Menu: After the 3D setting in the H5360's menu is enabled, a pop-up menu is activated that displays a notification that one has entered the 3D mode. While this menu only shows up for 10 seconds, it is a definite annoyance when using the NVIDIA system. Each time a 3D video or a 3D game is launched, this pop-up is displayed. A menu option to disable or 'never show again' would be greatly appreciated.

Remote control: The remote is limited in both physical design and function. It is rectangular, slightly smaller in length and width than a credit card and is generally uncomfortable to hold. It worked best when pointed directly at the projector. I had difficulty getting the projector to recognize commands when bouncing the IR signal off the screen. While this is an annoyance, it becomes a non-issue with the use of a universal or third party remote control.

Color Wheel Speed: The H5360 runs at a 3X color wheel speed. I noticed an occasional rainbow while testing the H5360, however they were nearly exclusive to 2D content. While I did not find the degree of rainbow reproduction objectionable, I am not extremely rainbow sensitive; the relatively slow color wheel speed may be a limitation to some viewers. While I was able to 'create' rainbow artifacts in 3D mode by quickly darting my eyes across the screen, I did not notice rainbows in normal viewing of 3D material.

RS232 Port: The RS232 port on the connection panel is not functional.

The primary feature that sets the Acer H5360 apart from similar projectors in this price range is the ability to provide a quality reproduction of 3D content. Additionally, the low cost of ownership, very useable levels of light output and good 2D video performance place the H5360 high on the price/performance curve. It has it limitations, particularly in limited placement flexibility. However, it excels in its intended use scenario - 3D. If you are looking for a reasonably priced way to experience the new world of 3D gaming and video (and the limited placement capability is not an issue) I would recommend a close look at the Acer H5360.

For more detailed specifications and connections, check out our Acer H5360 projector page.