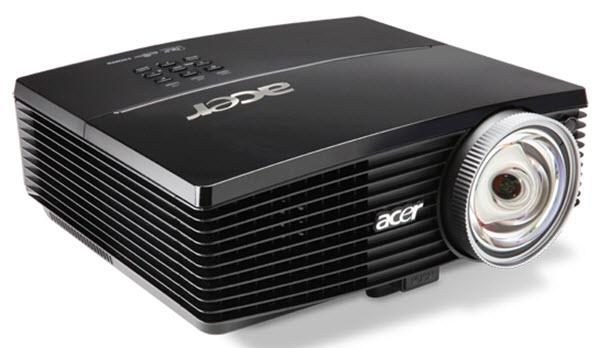 The Acer S5201M is a new interactive short throw, DLP-based XGA projector rated at 3000 lumens. It provides refined image quality at a street price under $800. The short throw design easily fits a big picture into a small room, the S5201M can produce an image that is 1.6 times wide as the distance of the projector from the screen. The projector includes a full complement of features, including the Acer SmartPen and virtual whiteboard software, 3D capability, dual HDMI inputs and a 4,000 hour eco lamp life. The Acer S5210M makes it easy to engage the audience with a big and bright image, a short throw that provides minimal image interference and a unique software package that enables on-screen interaction between the audience and the presenter.

The short throw design and XGA resolution make the S5210M best suited for the professional or educational environment. The case size (11.4"x10"x3.9") and near 8 pound weight are appropriate for fixed location or room to room use. With a fixed lens (no zoom function), the image size is adjusted by physically moving the projector. A mobile cart is a good solution for the classroom while office users will want to make sure available mounting locations provide a suitable screen size.

I tested the projector in several different conference rooms. The projector was a great fit for small 4 person breakout rooms that contain a single circular table. Placing the projector at the table edge provided only three feet of throw distance, yet the S5210M generated engaging 70" diagonal image. Comparatively, a standard throw projector with a 2:1 throw ratio would provide an image diagonal of only 23". Selecting the "light yellow" Wall Color image preset improved image color balance when using the beige wall as a screen.

I used the projector to give a presentation in a small executive office using only the included media player and a flash drive. Leaving the laptop at my desk allowed me to go from a cold start to presenting in about a minute. Additionally, I did not have to deal with toting around a laptop or connecting the laptop to the projector. The remote control worked perfectly to advance the slides and its built-in laser pointer was handy.

Brightness: Peak light output from the Acer S5201M was 2,760 ANSI-lumens or 92% of the 3,000 ANSI-lumen specification. Maximum light output was achieved using the Presentation image preset and Eco lamp mode set to Off. I tested the projector in a normally lit room with screen sizes up to 120" in diagonal and found image quality at this size more than acceptable. Brightness uniformity was 72%, which compares well to projectors with a short throw lens design.

With a small screen (in the 50" to 60" diagonal range), nearly 3,000 lumens of light output may be too bright, depending on room lighting. Switching to low lamp drops peak brightness by about 18% to 2,263 lumens. The Video image preset and ECO lamp provided the lowest light output at 1,362 lumens. Users may want to balance small screen sizes with ambient room lighting to avoid distraction from excessive brightness from the screen.

Color Balance and Picture Quality: The projector includes four Display Modes and four additional color balance presets for projecting on a non-white wall. I was most impressed with the balance between color performance and light output in the Bright image preset. Viewing photographs in Bright preserved fine color graduations and provided realistic flesh tones. While the Presentation mode offered a slightly higher light output, the color balance noticeably shifts toward green. I would reserve Presentation mode for basic PowerPoint diagram type content. Video performance was acceptable for a commercial/business projector. I did most viewing in the Standard image preset after reducing the Color Saturation by a few clicks. While the projector was not able to reproduce a deep and inky black level, it did a great job at maintaining image detail across the entire brightness range.

Acer SmartPen & Whiteboard Software: The combination of the Acer Smart pen and included whiteboard software provides an integrated solution for control and real-time modification of any computer based presentation content.

The SmartPen requires a USB connection between a computer and the projector. Using a wireless connection to the projector, the SmartPen provides full hand-held mouse control. Pointing the SmartPen at the projected image allows full cursor control by moving it in three dimensional space. Physical left, right and center scroll wheel mouse buttons are included along with a programmable multifunction key. The SmartPen contains a built in rechargeable battery (charging via USB) that provides 20-40 hours of use.

The SmartPen performed flawlessly. It was a great way to control the computer remotely as scrolling speed was smooth and accurate with no noticeable cursor jumps. When used during a meeting that included multiple presentations, users were able to use the SmartPen to advance through the presentation, exit PowerPoint and navigate to an open web page to pull up the next slide deck.

My favorite use of the SmartPen was in my home theater. The Smart Pen was an excellent way to navigate a 10 foot user interface such as Windows Media Center. Manipulating the cursor control by simply pointing the pen at the screen felt much more natural than using a standard mouse against a sofa cushion. I would make the SmartPen an immediate addition to the theater if Acer would release a version that would work with different projector models.

The NXboard software is described as enabling "the Next Generation Blackboard". Once installed, the software overlays a series of icons on the bottom and right edges of the computer desktop. When the software is active, the icons are always visible, even during a full screen presentation mode. Clicking on an icon allows one to interact with any content on the screen via cursor control. Users can draw, write, highlight or add in a series of built-in graphics and shapes to the image projected on the screen. Each 'screen' created by the software can be saved for sharing with other people.

Functionally, the NXboard software performed well. I imported an existing PowerPoint file and utilized the red and green 'checkmark' graphics to track action status during a meeting. I saved the modified version and shared the update with the rest of the team. Beyond simple graphic additions to existing documents, I found limited use of the software in a business environment. Classroom users may find additional benefits due to the interactive nature of the software which would help keep the attention of a younger audience.

Presentation Features:The S5201M includes many features that make facilitating meetings easier. The timer can be set to count down a specific amount of time or can function as a stop watch to help keep meetings running on schedule. The remote control contains a laser pointer, dedicated keystone buttons and the Acer Empowering Key that provides short cuts to the timer, picture setting and lamp modes. The media player allows one to easily conduct a presentation without a computer.

Input panel:The projector includes two HDMI inputs along with dual VGA inputs and a dedicated VGA monitor pass through. Analog video connections are covered by composite, S-video and component video via one of the two VGA inputs. Audio inputs include the HDMI ports, a 3.5mm stereo input and a mono microphone input. A 3.5mm stereo output jack is available for connection to external speakers. Additional inputs include an RJ45 jack for network control, two full sized USB inputs and a single mini-USB input. Lamp Life: The projector's lamp is rated at 2,500/4,000 hours for normal and eco lamp modes respectively. Replacement lamps can be found for less than $250.

3D Capability: The projector supports 3D content using either the NVIDIA 3D Vision system or the Texas Instruments DLP Link 3D system. While the projector does not support a direct connection to 3D sources such as 3D Blu-Ray players or cable boxes, it is a viable option for computer based 3D applications.

The S5210M is an NVIDIA certified projector that allows for a nearly seamless setup with the NVIDIA system. While I had to update to the latest NVIDIA drivers during the initial setup, it was completely plug and play with future uses.

The 3D performance of the projector was impressive. The major advantage of the S5210M over other 3D display types was a total lack of separation artifacts (or ghosting) that occurs between sequential images. Color quality and balance was acceptable in 3D mode, although the room lighting will need to be controlled due to reduced brightness when using the 3D mode. Ultimately, for high resolution video and gaming, the limiting factor to 3D performance was the XGA resolution.

Internal Sound Quality: The Acer contains dual 5 Watt speakers. Sound quality from the speakers was acceptable; however, the projector was not capable of producing very high volume. Sound output should be sufficient for a small room or quiet environment, but users should plan on using external amplification for most surroundings.

Placement Flexibility: Image size of the projector can only be adjusted by moving it away from or closer to the screen as it does not have a zoom lens. Additionally, the projector has a large image offset at 30% of image height. When placed on a table, I needed to raise the back feet to center the image on the screen. Fortunately, the projector contains an effective keystone feature that easily corrected the geometric distortion. For a 100" diagonal image, the projector requires 4 feet of throw distance, which equates to a screen width that is 1.6 times the throw distance.

Rainbow effect: I am not overly sensitive to the DLP rainbow effect; however, I noticed rainbows on occasion. The rainbow effect was most visible when viewing video in Presentation mode. Rainbows were not visible during slide transitions, even with an extreme volume of animation.

At its core, the Acer S5210M is a short throw projector that produces a bright and pleasing color-balanced picture. Beyond that it goes from competent to exciting. The Acer SmartPen, future proof 3D capability, internal media player and presentation features are attributes that set this projector apart from its competition. While the Acer S5210 is not the lowest cost projector in its class, the sophisticated feature set and image quality make this projector a great performer and a great value at under $800.

For more detailed specifications and connections, check out our Acer S5201M projector page.