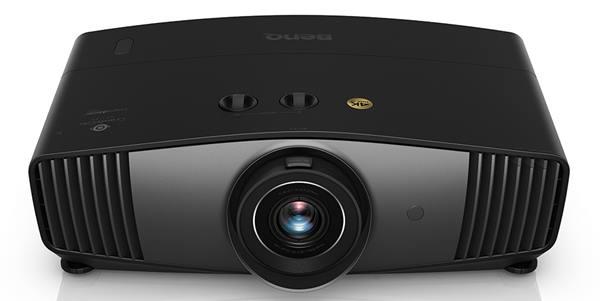 Priced at $2,499 vs. $1,499 for the HT3550, the HT5550 represents the first time in several years that BenQ has offered a home theater projector that sits between its $1,500-and-under entry-level models and the high-end HT8000 and HT9000 CinePro series projectors targeted at the integrator channel. This year's HT8060 and HT9060 carry MSRPs of $7,999 and $8,999, respectively, and offer benefits that include an ultra-high-quality 4K lens system and, in the case of the HT9060, a sophisticated LED light engine built on the Philips ColorSpark technology. So while the HT3550 is intended as a replacement for BenQ's earlier HT2550 model, the HT5550 is a new drop-in.

Both the HT3550 and HT5550 feature some key benefits that have become increasingly important for home theater enthusiasts, including the ability to reproduce colors across most or all of the DCI-P3 color space that is used to master today's UHD content. DCI-P3 is 26% larger than the traditional Rec.709 HDTV color gamut, offering additional color range in the most saturated reds and greens that becomes obvious with some content. The HT5550 claims full 100% coverage of DCI-P3, while the HT3550 is said to hit 95% of DCI-P3—a nice perk at its modest price point.

In addition, as part of what BenQ is calling its CinematicColor techology, the projectors both have color modes targeting the D65 reference white point, and have been tuned with an ISF-type calibration at the factory to stay within acceptable error levels of D65 across the full brightness range. D65 is a neutral gray akin to natural daylight that is used to define white in the mastering of entertainment content; displays should ideally reproduce it across their grayscale from the darkest to the brightest whites without any obvious red or blue tint. The HT3550 and HT5550 each come with a certificate from the factory showing the results of their color-space and grayscale calibrations.

Both projectors also feature compatibility with both HDR10 and HLG high dynamic range content. BenQ has further advanced its HDR tone-mapping and image rendering over its prior generation HDR projectors with a package of technologies dubbed HDR-PRO. It is said to "incorporate auto-color and tone mapping techniques to offer superior brightness and contrast ranges as well as ideal image optimization."

The HT5550 distinguishes itself from the HT3550 in a number of ways beyond its slightly wider color gamut. It is built on a larger and heavier chassis to accommodate a bigger and more sophisticated, center-mounted lens (an 11-layer vs. 10-layer all-glass design). While the more compact HT3550 offers a relatively short throw lens with modest vertical lens shift and zoom designed to accommodate close-up coffee-table placements, the HT5550 is more flexible and offers up a generous 1.6x zoom and +/- 60% vertical as well as +/- 23% horizontal lens shift. (Both projectors offer keystone correction, which we always recommend you avoid using to prevent image degradation.) The stylish "4K HDR"-emblazoned barrier visible in front of the HT3550's lens is a stationary shroud that has no effect on image geometry but prevents the lens from spilling light onto the ceiling when it is ceiling-mounted, a complaint with the older HT2550 that has been successfully addressed here.

The connection panels on both projectors are generous. They share in common a pair of HDMI 2.0/HDCP 2.2-complaint HDMI ports; a USB 3.0 input for playback from a flash drive via the onboard media reader as well as a USB power port for use with streaming or other dongles; and both 12 volt trigger and RS-232C serial connections for control. Unusually, each also features a 3.5mm analog audio output and an optical audio output to accommodate a variety of audio playback systems. (The HT3550, which is clearly expected to see more action as a portable projector for temporary setups, also includes a pair of 5-watt stereo speakers.

The CinePrime HT3550 began shipping earlier this month and is widely available from online retailers including ProjectorCentral's affiliated resellers. The CinePrime HT5550 will be available at retail starting on April 16th from the same channels; SnapAV will initially have exclusive wholesale distribution rights for the custom integrator community. Equivalent models for the overseas markets are the W2700 (for the HT3550) and the W5700 (for the HT5550). [BAN3

For more detailed specifications and connections, check out our BenQ HT5550 projector page.

I tend to disagree. DCI-P3 is only used for cinema material mastering and coloring, not to have anything to do with UHD (which is "4K" television). Further, Rec. 709 is not the one used for UHD (television). It is called Rec. 2020.
Rob Sabin, Editor Posted Apr 13, 2019 4:00 PM PST
Thanks, Stunko. Actually, you are right, and so is our article. DCI-P3 is used to master most 4K and UHD content today, usually for theatrical release in the case of Hollywood movies. UHD uses a Rec.2020 color envelope, and with rare exceptions, all 4K/UHD displays will recognize a Rec.2020 signal from a UHD Blu-ray or a streamed or broadcast UHD program. These programs mastered at DCI-P3 are transferred into the Rec. 2020 color space, where their outside color limits fall within the DCI-P3 equivalents. Display makers talk about reaching X% of DCI-P3 because there is no consumer display that can show full Rec.2020 color at this time and no consumer content created (or at least, released) with color that goes beyond the limits of DCI-P3. So hitting 100% DCI-P3 really means the display can hit 100% of the DCI-P3 color limits within UHD's Rec. 2020 color envelope.
Asif Aslam Posted Apr 14, 2019 12:01 AM PST
BenQ Europe hasn't confirmed the release date yet.
Al. Posted Apr 14, 2019 7:10 AM PST
Interesting addition to the BenQ line, I have been searching for a 4K replacement for my W9000 and up to now considering the Optima UDH65, the HT5550 may now be in the running!

I am looking forward to your review so that I can compare these two projectors.
Chris Posted Apr 15, 2019 3:19 PM PST
The HT3550 sounds very interesting for my use case. When the input lag is okay Iâll buy it.

Looking forward to the Projector Central review!
Rob Sabin, Editor Posted Apr 15, 2019 5:59 PM PST
We will certainly be looking at input lag when we test this, Chris, both 1080p and UHD.
John Hogan Posted Apr 17, 2019 7:04 AM PST
Hey thanks for this intro. I'll look out for the review. For me, $1500 USD is the point at which I'll seriously consider upgrading to 4k if it's a significant improvement on 1080. I don't care about the underlying tech if it simply works well. Cheers.
Rob Sabin, Editor Posted Apr 17, 2019 7:48 AM PST
John, there are most definitely some compelling reasons to step up to 4K (either a full 4K projector like these or one of the 4K-complaint 1080p pixel-shifters) at this point. In a nutshell:

- Resolution: there's a good argument made that the extra pixels going from 1080p to UHD are lost on most flatpanels due to the small screen size and typical viewing distances. However, with projection the difference in sharpness and detail while watching 4K content on the big screen is a much more obvious and discernible benefit.

- HDR and wide color gamut: HDR is the big one here. Even though projectors can't hit the bright highlights that flatpanels can, there is most definitely an obvious boost in highlights and overall dynamic range on the better HDR projectors. And the good news is that after two or three years of stumbling around in the dark (pun intended) trying to find the right formula for handling HDR tone-mapping for projectors and attempting to adapt it to a display type that it was really not designed for, the manufacturers have clearly started to refine things in this year's new generation of product. So it's not a bad time to jump in.

The other plus when you gain access to UHD content is the wide color gamut that goes hand in hand with UHD HDR content. You won't always see the extra colors that wide gamut affords, but content that relies on heavily saturated reds and greens will usually look more natural and robust. And manufacturers are also pushing the edge of their wide gamut capabilities as well in the newer projectors. Where the ability to hit 100% of the DCI-P3 space (see my response to Stunko's comment above) was reserved for more expensive products in the past, even affordable models like the BenQ HT3550 discussed here are providing something close to full coverage now.

Bottom line: while I'd say there were some good reasons for prudent shoppers to hesitate on going 4K up till this point, including a relative dearth of available UHD content on disc and streamed from the internet, that's a much tougher argument to make now. Although other traditional factors remain critical in selecting a projector (contrast and blacks, quality of the optics, etc.), it's hard to say now that 4K isn't absolutely ready for prime time.
Mahendra Posted Apr 17, 2019 7:57 AM PST
Hello Rob,

When do you expect to post the reviews on both the projectors? Will you be able to do any head to head comparison with Epson 5050ub?
Rob Sabin, Editor Posted Apr 17, 2019 8:06 AM PST
We have the HT3550 and Epson HC5050UB in house now and are working on both reviews; I expect them to be up within a couple of weeks. We've been promised a sample of the HT5550 so no timetable yet on that.
Menny Drives Posted Apr 20, 2019 12:57 AM PST
Is the HT5550 more popular than expected or is BenQ known for paper launches? It was apparently set to âlaunchâ on April 16th but as of the 20th itâs only available at one retailer in the states, and even then itâs on special order with a 1-2 week availability estimate. BenQ Direct also has it listed âout of stockâ.

Just curious as I didnât really look into the HT2550 or HT3550 until both were already a few months post-announcement.
Rob Sabin, Editor Posted Apr 20, 2019 2:10 AM PST
Menny, both of these projectors have been slower in shipping than expected as BenQ delayed and spent time doing final fine-tuning of the image. I believe the HT3550 is now available but the HT5550 may still be filling the pipeline. We have yet to receive a review sample for it, but the company's release of a product availability announcement suggests they're done tinkering and have deliveries scheduled to retailers.
Dan Posted Apr 27, 2019 5:22 AM PST
Hi,

Iâm currently using the HT2050A projector, but I wanted to get an idea if I should upgrade to the HT3550 that just came out. I donât do any gaming. Our DirecTV receivers are not 4K, but mainly we use our projector for watching Sports, movies on DirecTV and we have it on when we have guests over in our basement rec room (parties, etc...).

Since there isnât alot of 4K content on DirecTV and based on how we use it, is an upgrade worth it for us?
Chris Posted May 2, 2019 2:46 PM PST
Very strange, the HT3550 still isnât available anywhere, even on BenQ direct it can only be preordered.