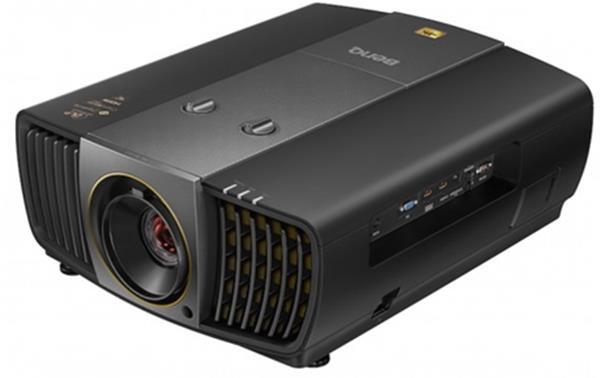 Both projectors utilize Texas Instrument's 0.66-inch 4K XPR chip technology to deliver to the screen the full 3840x2160 pixel-count in a UHD signal (8.3 million pixels total). Critically, the flagship HT9060 features ColorSpark HLD LED light-source technology from Philips. Along with the usual long life associated with LED light engines (20,000 hours in this case), the ColorSpark HLD system offers unusual brightness and color accuracy not typically found with traditional LED projection. The use of multiple LEDs mounted inside a phospher light tube with a lens on the end to focus the light output are said to create a brighter point source of light within a narrower band of color than is possible with other LED systems.

With this LED light engine as part of BenQ's CinematicColor technology package, the HT9060 is said to deliver 98% of the DCI-P3 color space to which modern 4K movies are mastered. The HT9060 also offers ISFccc calibration options for customized ISF Day and ISF Night modes. It is provided out of the factory with a calibration report that verifies fine-tuning of its Rec.709 color mode in the areas of neutral gray D65 color temperature, gamma, black level, white level, and RGBCMY hue, saturation, brightness.

BenQ says its takes advantage of the projector's wide color gamut with carefully optimized HDR tone-mapping and rendering that took over a year to develop. In its product announcement , the company noted that "Based on BenQ's black equalizer technology found in the company's industry-leading gaming monitors, [both] projectors' HDR is tailored to perfectly balanced color saturation and rich color scale, revealing the details lost in dark areas without losing clarity or displaying incorrect greyscales." BenQ engineers are said to have worked closely with Hollywood filmmakers during product development to tune the image to deliver an accurate rendering of the director's intent.

Other critical specs include 2,200 ANSI lumens of brightness, and a rated 50,000:1 full-on/full-off contrast ratio, though as with other LED projectors the HT9060's apparent brightness is said to be greater than its ANSI lumen rating suggests. The HT8060 is a THX-certified lamp-based model with the same rated lumen output and contrast ratio; it uses a six-segment RGBRGB color wheel to achieve a rated 81% of the DCI-P3 color space and full 100% Rec.709 coverage. Both projectors feature a proprietary, 14-element, six-group lens designed from the ground up to optimize the sharpness of 4K images while preserving brightness and minimizing chromatic aberration. Both models also support Full 1080p 3D playback.

Installation is simplified by a 1.5x zoom function, and the modern design shared by both models (with front-facing ventilation) makes them suitable for an exposed ceiling mount or for tucking into a hideaway compartment. Both models can also accommodate an optional Panamorph Paladin anamorphic lens to facilitate constant-image-height, letterbox-free movie viewing on a 2.4:1 aspect ratio 'Scope-style screen. Inputs include two HDMI (one version 2.0 with HDCP 2.2, one version 1.4), a 15-pin RGB computer input, and a USB Mini-B port. A pair of 12 volt triggers, an IR input, and an RS-232 connection are included for control.

For more detailed specifications and connections, check out our BenQ HT9060 projector page.

The BenQ HT9060 is also sold outside of the United States of America as the BenQ X12000H. Some specifications may be slightly different. Check with BenQ for complete specifications.

Comments (25) Post a Comment
Suraj Posted Jan 23, 2019 7:24 PM PST
Great news. Can't wait to see a review on HT9060.
Rob Sabin, Editor Posted Jan 23, 2019 7:30 PM PST
Suraj, we have a sample on the way and look forward to having a look at it as well.
Toby Posted Jan 23, 2019 8:12 PM PST
3D?
Rob Sabin, Editor Posted Jan 23, 2019 8:19 PM PST
Both models support Full 1080p 3D. I've added a comment to the article.
Walter Posted Jan 24, 2019 12:32 AM PST
I find BenQ's pricing strategy continues to be weird. These machines are not native 4K, don't have 100% DCI colour, yet are more expensive than several of Sony and JVC's native 4K machines, and twice the price of the Epson that does 100% DCI. How can they hope to compete at this price level?
Rob Sabin, Editor Posted Jan 24, 2019 1:49 AM PST
Walter, putting aside any arguments about the ability of the DLP XPR chips to deliver the full detail of a UHD signal (which our tests suggest they do absent differences in lens quality or signal processing), an argument can be made that the HT9060 in particular could be a great value. The Philips HLD LED technology is an advanced approach developed on their premise that LED is the best long-term solution for projection for both long life and color/brightness performance. You're paying for that here, along with a large and well-engineered lens accommodated on a big, 40-pound chassis. I'll add to this that the difference between 100% DCI-P3 and 98% DCI-P3 is invisible on screen. Taking all this into account, if this projector delivers the kind of accurate picture BenQ is promoting for it (along with decent contrast), it's pretty attractive at $8,999 against the better home theater laser projectors it's competing with. Sony's laser models go for $25K and $35K!

The HT8060 at $7,999 is a somewhat harder argument to make due to the preponderance of lamp-based, 4K projectors. But if you skip the 1080p pixel-shifters still favored by Epson and then look for a true 4K projector with the kind of lens and construction quality offered by BenQ in this model, you're probably starting in the $6,000-$8,000 range with one of the mid-line Sony pieces or 4K JVC models.

walter de sagher Posted Jan 24, 2019 2:00 AM PST
Thanks for the reply Rob. With current price levels for LED engines, and especially those exotically expensive laser engines, i still favour regular lamp models. With my viewing habits (one movie almost every day), i burn the lamp 600 hours per year at the very most, so i don't need a 20,000 hour light engine. I'd rather get an affordable lamp projector like the pixel-shifting Epson, and replace the lamp after 3 or 4 years for continued decent light output and proper colour balance. Then after another 3 or 4 years, upgrade to a better projector - perhaps, by then, a LED or laser. Speaking of Epson pixel-shifters, here in Europe the higher-grade of the two machines announced last year at CEDIA is now available, but doesn't seem to be in the US - hence no reviews anywhere? Do you know when it might become available for reviews? I prefer to wait for your excellent judgement before i purchase it - my 2009 Sony is due for replacement. all the best, Walter
Rob Sabin, Editor Posted Jan 24, 2019 2:10 AM PST
Walter, that Epson US replacement for the HC5040 is said to be imminent now. Hope have something on that soon...
Cory Posted Jan 24, 2019 6:33 AM PST
The pricing is not consistent with the industry, even for cutting edge...Optoma is doing laser 4K with modulation for less than half of this. The days of $10K DLPs are over unless youâre Sim2 or Runco (speaking of, the older Runco LED DLP can be bought used for under $1K...though itâs 1080p theyâve still got tons of life left in them...and youâve got a Runco). We need products that keep projectors from going obsolete, not help them go extinct.
Rob Sabin, Editor Posted Jan 24, 2019 7:16 AM PST
Cory, please see my response to Walter on the same question. You have to account for the entire package you're getting including the always critical lens, which costs serious money to do well. I do know that this model's predecessor, the HT9050, had an excellent lens, so this piece should have very good optics as well. And I'd suggest that a Runco 1080p LED DLP projector from the 2009 to 2012 period when they were selling these--at $16,000 to $18,000--can't even be remotely compared to a circa 2019 projector from BenQ with this advanced Philips LED tech and the latest 4K DLP chips. Things have not stood still. You know how much light those Runcos put out? 700 lumens. You'd have had to spend $40K-$50K on a dual projector stack from them to get 1,500 lumens. It's all in our database if you care to search. You could do much better today in a 1080p projector with less than $1K than buying that used Runco. Bottom line: it's always dangerous to look at nothing but specs or the imaging technology or the light engine and make sweeping judgements about image quality in a given projector.

What I do find interesting about this discussion is that Sony puts out a $10,000 4K lamp-based projector, and laser models at $25,000 and $35,000, and nobody blinks. But BenQ puts out an advanced LED piece for $9,000 with similar benefits to laser (and that probably has no peers in the LED projector realm today) at a price that's just shy of 65% cheaper (!) than Sony's least expensive laser 4K projector... and somehow it looks like they're not in sync? Why? Because it happens to use a DLP chip instead of an LCoS imager and doesn't carry the Sony or JVC brand name? I'm not suggesting that the LCoS models from these brands haven't earned their good reputations and the right to charge a premium. But if anything is out of sync, it's not BenQ's pricing.

We have to wait and see how the HT9060 performs, and what if anything it might sacrifice against other projectors with comparable benefits and build quality at similar and higher price points. But to directly address the last point in Cory's comment, perhaps it's actually models like this one that will keep projectors from going extinct... by pushing the boundaries and trying to offer all the benefits of a laser light engine surrounded by premium components at less than half the cost of a comparable laser projector.
Aaron Posted Jan 24, 2019 3:38 PM PST
Hello, Thanks for the info on new Benq units, very interesting. Any news or reviews coming up for the Benq Cineprime W2700? Aaron
Rob Sabin, Editor Posted Jan 24, 2019 4:00 PM PST
Nothing specific yet, Aaron. I expect to get a briefing on this model soon.
Anwaar Posted Jan 24, 2019 4:46 PM PST
Any news if BenQ working on 4K short throw projector?

Thank you for the great review! What is your opinion on comparing the Sony 295ES/695es with the HT8060/HT9060 models? I know they use rather different technologies but putting some of the manufacturer specs aside (as we know they can be exaggerated in some cases), which models achieve a more natural and life-like image quality? Also, I haven't seen much out there in regards to the motion processing so what are your thoughts in this category as well? I really look forward to your response and thank you again!
Rob Sabin, Editor Posted Feb 10, 2019 10:06 AM PST
Andrew, be advised this was no review at all -- just a new product announcement. We haven't been able to compare the Sonys with these new models.