The BenQ HT3550 ($1,699 list, $1,499 street) and BenQ HT5550 ($2,699 list and street) both offer 4K UHD (3840 x 2160) resolution using pixel shifting, a high claimed color accuracy with factory calibration as shipped, and support for HDR10 and HLG high dynamic range. Both are also built around TI's 0.47-inch XPR DLP chip and RGBRGB color wheels. But as the price differential indicates, there are important differences as well.

As you would probably expect, the more expensive HT5550 has the advantage in almost every case where the two differ. The question is whether the advantages are significant enough for your needs to be worth the additional cost. Here's a point-by-point comparison, starting with input lag, the one case where the HT3550 has a small but clear advantage, if only at 4K.

Input Lag. Both projectors have the same measured input lag for 1080p at about 60 ms, which is a little slow even for casual gaming. At 4K, the measured lag is even slower for the HT5550, peaking at around 90 ms, but drops to about 50 ms for the HT3550, which many consider acceptable for casual gaming. However, neither projector comes close to the 16 ms or lower input lag found on the fastest gaming projectors.

Brightness. The HT3550 has a slightly higher brightness rating, at 2,000 ANSI lumens compared with 1,800 for the HT5550. However, that's barely enough to see a difference, and in our tests the HT5550 was the brighter of the two in most color modes.

Throw Range. The 1.6x zoom for the HT5550 gives a larger throw range than the HT3550's 1.3x zoom. More critical, however, is that the two ranges barely overlap. For a 100-inch diagonal image, for example, the throw distance range for the HT3550 is roughly 8.25 to 10.75 feet compared with about 10 to 16 feet for the HT5550. Either one could be better for your needs, depending on the room size, screen size, and whether there are any limitations on how far you can place the projector from the screen. For the throw distance range for the screen size you plan to use, check the ProjectorCentral BenQ HT3550 projection calculator and the ProjectorCentral BenQ HT5550 projection calculator.

Lens Shift and Offset. Assuming both projectors' throw distance ranges are suitable for your needs, the HT5550 wins hands down for placement flexibility. Its large vertical lens shift (+/-60%) will let you put it in a ceiling mount, on a medium-to-high bookshelf in the back of the room, or on a table that's no lower than about 10% of the image height below the bottom of the screen. The +/- 23% horizontal shift also offers plenty of leeway for placing it left or right of the screen's vertical centerline. The HT3550' vertical shift (+10%) is designed for a low table just below the screen or a ceiling mount above it. There is no horizontal shift.

Onboard Audio. The HT3550 includes onboard audio, which the HT5550 lacks. This won't matter for home theater use, where you'll want to use an external sound system (both offer analog and optical audio output jacks). But if you want a projector you can use for a backyard movie night, the HT3550 won't force you to set up a separate sound system also.

Dynamic Iris. Both models originally shipped with a dynamic iris that could be set only to On or Off, and often resulted in obvious pumping (flickering or near flickering) when content switched from dark images to light ones or vice versa. At the time we reviewed them, only the HT3550 firmware had been upgraded to change the iris settings to Low, Middle, High, and Off, with the Low setting eliminating most distractions from the automatic iris adjustment. At this writing, the HT5550 firmware has been upgraded to offer the same settings choices. For both models, the new firmware eliminated pumping in the scenes where I saw it before the upgrade. 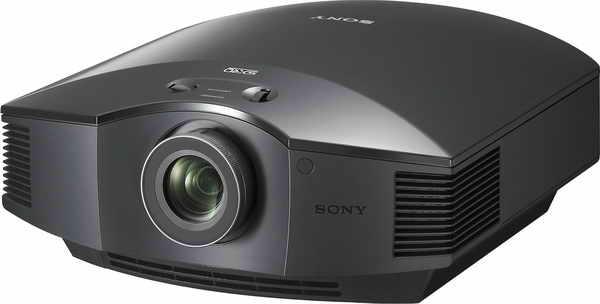 1080p/SDR Viewing. For the side-by-side image comparison, I used the same movies discussed in the individual reviews, showing them on both projectors simultaneously using a splitter. The HT3550 delivered slightly more saturated color for SDR. This extra punch translates to a better sense of three-dimensionality in some scenes, particularly those dominated by midtones. However some colors are also slightly darker than they should be.

In the opening scene in La La Land, for example, the sky was a bit bluer and darker with the HT3550, and a bright yellow dress on one of the dancers was both a touch darker and a slightly different hue than it should be, making the color less accurate—and less vibrant—than with the HT5550. In addition, the HT5550 offered better contrast, which gave a greater sense of three dimensionality to most scenes—particularly darker scenes—as well as better shadow detail.

The HT3550's limitations for contrast showed primarily in challenging night scenes, where I could adjust it to show a satisfyingly dark black or show shadow detail, but not both at once. In one night scene, where the lead characters are walking on a road lit by street lamps, the HT5550 showed individual trees in the dark black of the woods alongside the road. I couldn't adjust the 3550 to show them without also starting to wash out the image.

The takeaway here is that the HT5550 delivered better color accuracy, contrast, and shadow detail for SDR, but its advantages didn't show in every scene, and they weren't enough to notice without measurements, a side-by-side comparison, or already knowing what the scene should look like. Focus for both projectors was even across the entire screen, with the HT5550 delivering the crisper image. But although the difference in sharpness was easy to see with graphic images with fine lines, it wasn't enough to be obvious with photorealistic images.

UHD/HDR Viewing. The HT5550 and HT3550 delivered similar levels of color accuracy with 4K/HDR content, with fewer differences between them in side-by-side viewing than with SDR content. In the opening scene with the 4K HDR version of La La Land, the bright yellow dress mentioned above was a nearly identical hue and brightness with both. There were still some differences between the two, with blues a little darker with the HT3550, and skin tones in Batman v Superman a little redder. But color was equally vibrant and saturated with both projectors, and where they differed, you'd have to take measurements to know which one was off.

The HT5550's advantage for contrast, black level, and shadow detail was even greater with HDR than SDR. In the scene in La La Land where the lead characters are walking on a road lit by street lamps, and with the HT5550 at a midrange setting for HDR brightness, the HT5550 maintained shadow detail in the wooded area near the road. The same area merged into a nearly solid patch of black with the HT3550 even with the brightest HDR setting—a setting that also blows out details in highlights in brighter scenes.

Note too that the HT3550 is limited to a maximum 8-bit color depth at 3840 x 2160 60Hz. Although I didn't see any banding artifacts in any of the video and movie content I tested with, I saw some hints of banding in the downloadable ProjectorCentral 10-bit HDR Grayscale test animation (right click to "Save Link As" for download), which verifies 10-bit processing from input to image. The HT5550 does not have the same limitation on color depth, and didn't show any banding with our test animation. As with 1080p content, when I viewed a graphic with fine lines, or paused playback and looked carefully at fine detail, I could see the HT5550's sharper focus. When watching movies or video, however, the difference wasn't obvious.

3D Viewing. Both projectors support Full HD 3D, and both show highly watchable images, with nicely saturated color. I saw no crosstalk with either in my tests, and only the typical level of 3D-related motion artifacts for current generation projectors. Both are bright enough for comfortable 3D viewing in the dark with a 90-inch diagonal 16:9 image using a 1.0-gain screen.

If your combination of room and preferred screen size puts limitations on how far you can place the projector from the screen, choosing between the BenQ HT3550 and HT5550, with its longer throw distance range, can be as simple as picking the one with the throw distance range that matches your needs. If throw distance isn't a constraint, the choice gets harder.

The HT3550 offers two minor advantages in the form of onboard audio and a slightly lower input lag. The built-in speakers make it the better choice if you want a projector you can take to the backyard for a movie night. And although neither projector delivers the level of input lag a serious gamer would want, the HT3550 is more suitable for casual gaming, thanks to the lower lag with 4K input.

If you want a projector strictly for home theater, the HT5550 delivers a step up in quality compared with the HT3550, with better color accuracy, contrast, shadow detail, and black level, as well as a better sense of three-dimensionality in most scenes. But at $2,699, the quality is less impressive for the price than the value represented by the HT3550's quality for $1,499.

The more compelling argument for picking the HT5550 is that it offers far better placement flexibility, with a 1.6x zoom and a lens shift that lets you put it in a ceiling mount, on a table, or on a bookshelf in back of the room. If you need those features, they go a long way—along with the jump in image quality—to justify the extra cost. If not, the HT3550 delivers more bang for the buck and exceptional image quality for the price.

Key measurements for each projector were as follows:

Fan noise comparison. As the noise ratings indicate, the HT3550's fan noise is a little quieter with both set to Normal mode and a little louder with both set to Economic mode. However, the difference isn't enough to give either projector a real advantage at either power setting. Both offer the kind of steady sound that tends to fade into the background for anyone who isn't particularly sensitive to noise. Silence mode does not lower volume by enough to make much difference with either projector. And high altitude mode is loud enough in both cases that most people will want some form of acoustic isolation.