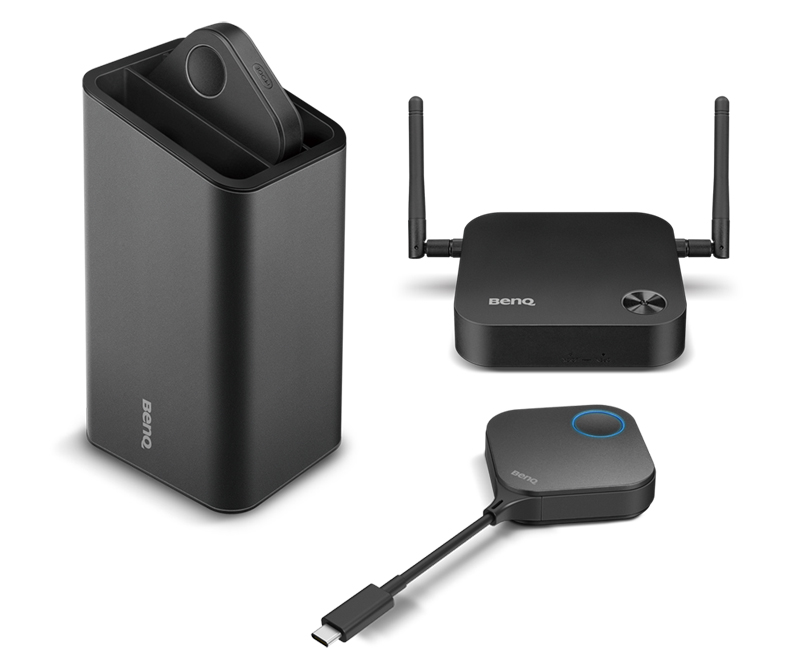 + Works with variety of computers

- Hardware can be a bit clunky and awkward in use


OUR TAKE ON THE BENQ INSTASHOW

BenQ's InstaShow takes the guesswork out of classroom and meeting-room video with quick, secure and high-quality wireless connections, but its first-generation hardware design detracts somewhat from an otherwise successful execution.


For teachers, there's nothing worse than being chained to a projector with an HDMI cable when all they want to do is roam around the classroom checking on students and helping them with their work. And for boardroom presenters, all that fumbling with cables to get your laptop on the big screen as your colleagues or sales prospects wait and roll their eyes can be a deal-breaker. Here's a solution. As one of the quickest, simplest and most secure ways to wirelessly transmit a computer's screen for all to see, BenQ's InstaShow pushes wireless collaboration from anywhere in the room.

As is the case with some other wireless connection systems, like Barco's ClickShare, InstaShow has two parts: the Host receiver plugs into a projector or display's HDMI port while BenQ's Button transmitter goes into the notebook, tablet, phone or other device being used as the source. The two connect over an encrypted 802.11ac WiFi link and will work with any source that uses the HDMI 1.4 or newer protocol, making InstaShow just as good for connecting a Blu-ray or DVD player as for computers.

InstaShow's black Button transmitter comes in two flavors to suit different devices: The WDC10 is for older notebooks and AV gear. It uses separate cables for USB power and HDMI video. By contrast, the WDC10C transmitter is for newer computers and moves power and video over a single USB-C cable.

Happily, both InstaShow kits come ready to connect; you get the receiver, two transmitters, mounting hardware, cables and an AC adapter. There's also a nicely designed cradle for the gear when it's not being used. On the downside, the 0.8- by 2.7- by 2.7-inch Button devices weigh in at a hefty 3.6-ounces and can feel big and heavy, particularly when working with a tablet. 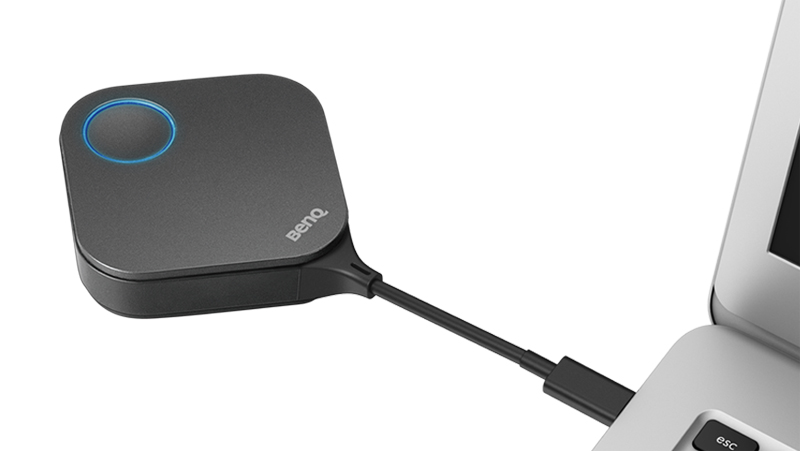 Note that BenQ has a lower-priced classroom alternative called InstaShare which, despite the similar name, is not compatible with InstaShow. While InstaShow concentrates on plug-in hardware and ease of use, InstaShare allows a variety of computers (Windows, Macs, Chromebooks, iPads and iPhones as well as Androids) to wirelessly connect to BenQ large screen displays. Still, InstaShare lacks many of the things that make InstaShow innovative. For instance, mirroring a screen with InstaShare is a multistep process that requires installing an app.

InstaShow is at its best by hiding the complexity of wirelessly connecting to a projector. Unlike other methods, like InstaShare and Actiontec's ScreenBeam, there's no software to load or WiFi network to manually connect to. Everything is built-in, automatic and secure.

The InstaShow kit includes a wordless instruction booklet but the downloadable manual explains everything in detail. After screwing in the receiver's pair of antennas, I plugged the Host's HDMI cable into an Epson BrightLink 485Wi short-throw projector, and connected the included USB power adapter and a wired LAN cable. When the receiver's big button glows green it's ready to connect.

In a similar fashion, after plugging InstaShow's Button transmitter into a computer, its big round button glows green when it's ready. Press it and the color changes to blue to show that its video is sent to the receiver via a WPA-2 encrypted link. In a second, it is projected.

Though it's able to work with up to 16 different transmitters, InstaShow can handle only one stream at a time and lacks anything like a split or four-in-one screen. Using the Mode button on the Host and Button transmitter, I was able to quickly pair the two devices. This way they automatically reconnect when in range. All told, it took two minutes to go from a sealed box to a connected computer.

Because the receiver was connected to my wired LAN, I was able to use BenQ's Web Management screens. This allowed me to make a variety of configuration changes and update InstaShow's internal software. The receiver's IP address is displayed on start up. Just type it into the address bar of a Web browser and InstaShow displays detailed setup information.

In addition to seeing the Host's connection status, I was able to add a start-up screen message, but not easily push an emergency message as you can with the Vivi screen-mirroring system, another competitive product. I skipped right to the Advance Setting section to fine-tune the video stream with three different picture settings (Video, Presentation and Low Power) as well as Low, Medium and High frame rate. These controls allowed me to balance the video quality.

I plugged the WDC10 Button's pair of cables into my Asus C202 Chromebook using a USB-to-HDMI video adapter. Within a few seconds, the Chromebook's display was sent to the projector and mirrored on the big screen. Based on measurements from the FPS Test Chrome app, it consistently moved 60 frames a second.

Using InstaShow's WDC10C Button is even easier. I just plugged the single USB-C cable into a computer and waited for the Button's light to change color. I used it with a Macbook Air, HP Elitebook and a Samsung Galaxy Tab S4 tablet, all with equal success.

On the other hand, there's no InstaShow Button device equipped with a Lightning plug that would work directly with an iPad. I was able to share My iPad screen using the WDC10 Button with Apple's Lightning Digital AV adapter and an external power source, but it's kind of clunky.

Regardless of the computer and content, InstaShow delivered smooth 1080P video with excellent audio synchronization. There were neither dropouts, freeze-ups, dropped frames, video artifacts nor any discernable lag between the notebook source and the projected image. In other words, it was as close to using a video cable as wireless gets these days.

InstaShow proved to be a great way to show videos to a class, like a Youtube clip of how a jet engine works or a State of the Union address. In addition to showing a lesson presentation and several Web sites, I used the Desmos Graphing calculator and did some finger sketching and math calculations for a class.

On the downside, while using the InstaShow Buttons I found that they heat up quickly and hit a peak temperature of 115 degrees Fahrenheit. That's not hot enough to cause burns, but it could prove to be unpleasant to use day in and day out. Nor is it clear how that that kind of operating temperature might affect long-term product life.

InstaShow had a range of 23 feet, good enough for the typical classroom or conference room but likely too short for a small lecture hall. When I went too far, the transmitter's button turned red and the connection was broken.

InstaShow's combination of video quality with ease of set up and use is nothing short of amazing. The devices, though, show some of the classic problems of a first-generation product, with hardware that's big, clunky and gets too hot. But its press-and-project dynamic can streamline using the big screen in classroom and conference room environments, particularly when security and ease of use are paramount.