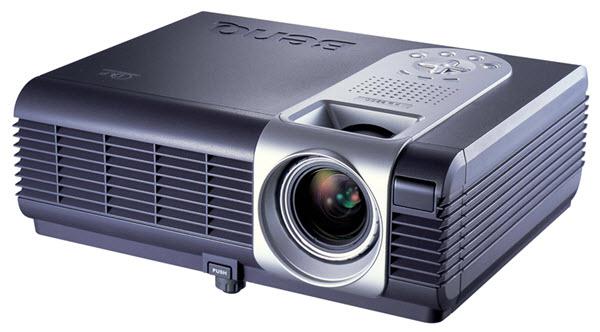 is a Benq!!! excelente resolution, a good DLP device, could be better if this proyector had a better lamp more lÃºmenes.

Any Problems: a candle light may have more lumens than this, the power light is very poor

I couldn't resist the price. I picked one up on ebay for $125 with a near new lamp. Considering its only an SVGA projector it preform better than expected. Little wonder this jewel was so popular in '04 for entry level HT on a tight budget. Easy to set up runs quiet and delivers a beautiful image even from my old LD player.

Any Problems: Twice "video" mode did the it over temp. Running it in cinema mode with no problems.

Bought the PB6100 5 years ago, and although I don't use it alot, it hasn't failed me in any way yet! More reliable than the Epson Powerlite my brother owns (his second due to dead pixels) When in controlled lighting, its a nice clear and crisp picture. Excellent bang for the buck!

1600 hrs on bulb, on still going ,like new.i guess mine was bult on a friday.bought in kelowna b.c. canada. 700 cad. rebate mailed back 20 days later.

I got it 3 1/2 years ago for $800 on a xmas sale, this is one the best electronics purchases i have ever made. It has a fantastic picture with VGA for games and DVD/media through the computer, very accurate colors and detail. The durability really impresses me, this thing has seen trips to Europe, house moves, been thrown around a lot. It might just be luck but the bulb life is amazing. I use it in video mode not eco mode and I am going on 4000 hours at least, i've lost track to be honest but it is still running strong! Too bad they don't sell these any more, I hope they keep selling replacement bulbs if mine ever needs one because i will definitely get it.

Any Problems: Some light leakage but not enough to be a problem. Occasional fan screech that seem to have disappeared by itself for some reason, maybe dust is lubeing it now :) It's not great with s-video or composite. VGA is perfect though, HD on xbox 360 was sweet.

Best projector I've owed yet. No problems what so ever. Have had it for over a year and not one problem! My next projector purchase will definitely be another one of these.

After one year I am very pleased with this projector. I saw this thing on sale for less than $500 with rebate, I just had to give it a try. I converted a spare bedroom into a theatre, itâs only a 11 x 10 foot room, so the throw distance is about 10 feet. Itâs mounted upside down on a shelf at the back wall. Screen is blackout cloth from the local fabric store. Signal is S-Video. I painted the room walls dark, and put a couch in the back of the room, so the viewing distance is about 10 feet. Everyone has been very impressed with the picture, and I'm using it in economy mode. None of them have seen any rainbow problems. The remote works just fine bouncing off the screen. Iâve had no problems so far.

Any Problems: After 1000 hours and 2 years i have problems with the lamp. white places in screen! Tenho problemas com a LÃ¢mpada devido a aquecimento!!!!

The short and sweat of it is I love it. I've had it about 2 years now just changed the bulb at 2996 hours and it was still working great. I played it safe and changed it. I would buy it again no regrets.

I have had this projector for 2 years now. We donât have a TV so all our watching is done on the projector and we are thrilled with it. It is easy to install, easy to use, a joy to watch, and great quality. It is high up on my personal list of "best buys"!

Any Problems: After 2 years and a lot of enjoyable watching my bulb needs replacing. no problem though.

The image quality is average. The brightness cannot possibly be 1500 lumens. It is worthless with light on - completely worthless. The colors are average at best. It does a very poor job displaying reds.

Any Problems: Unit has been very reliable, just disappointed with brightness and lack of color quality.

I'm going on 19 months and 2100 hours of regular use to project TV, DVD and Xbox. I have been *very* imressed with this projector, it has a good clear picture and when it can be found for $700CDN with rebates, its the best option out there. I'm not saying its the best projector out there but its definitely strong competition for value!

Any Problems: Bulb says 3000 hours, I've run on Economy mode for 90% of my viewing but the lamp is warning me about image degredation at 1900 hours. The image is getting poor, colours are blending and whites are starting to glow. Still, $400 for a new bulb and 3 years later I'm only at $1500...works for me!

I'm now 18 months into using a Benq 6100 projector. I've found many months after buying it that it is nothing like what Benq advertises. It was advertised at 1500 lumens. It has proven to be 800 or less lumens. It was advertised as having a 3x color wheel, it has a 2x color wheel. I would seriously reconsider any purchase from Benq, I'm surprised there is no class-action suit against them for mis-representation.

I've now used this projector for over 4100 hours without a problem.Great unit for the money.I only wish bulbs were less expensive,as they cost half as much as the projector did new.All the companies screw you on the bulbs though.Excellent through vga hookup.

Review by 12 months of use - Satisfaction High

I've had PB6100 for 12 mo. Flawless performance. Many negative quality/feature posts look like people who did not research their purchase (no idea what they were buying) or have not configured, cabled or calibrated the unit properly. Suggest ECO mode - picture is actually better IMHO - for longer life. Buy a calibration DVD - all projector brands need to be calibrated.

Any Problems: Just more comments. Composite video just magnifies a bad picture - deal with it. Progressive scan component video looks best/beautiful. This is not rocket science. The better the source - if cabled /calibrated the better the viewing experience.

This is a fantastic projector so far after 800+ hours. I run everything through my PC (DVD, TV, games, internet) using a long VGA cable. I live in a small apartment and it works very well here, with a 12 ft throw distance mounted on the ceiling. I sit 7 ft from the screen and the pixels are visible, but it doesn't really seem to matter the picture is so good. Full screen TV is not very good quality due to the tuner (I just shrink the TV window to a size where it looks good) that I'm using but games and DVD, man o man sweet. Considering that this thing cost $600 after the rebate, I think it is one of the best deals i've ever scored.

Any Problems: I initially got a PB6200 that died miserably after abot 5 hours of use. I took it back and got a full refund. I was a bit dismayed by benq after that, but i decided to try one more time with the 6100. Some people that have been over and seen it complain of the rainbow effect, but I can't see it unless I shake my head violently from side to side.

LOVED THIS PROJECTOR WHEN I GOT IT 1 YEAR AGO, BETTER IMAGE THAN I HAD EXPECTED, BUT NOW 820 HOURS INTO THE BULB AND ITS SO DIM THAT WE DONT USE IT!

Any Problems: BULB GAVE UP THE GHOST AFTER 820 HOURS NOT COVERED BY WARRANTY (SO MUCH FOR 2000 TO 3000 HOURS!) $750 NZ TO REPLACE!, MY CHEAP PROJECTOR SUDDENLY GOT AN EXPENSIVE TASTE FOR BULBS. BENQ SUPPORT TOTALLY PATRONISING AND UNINTERESTED. I WISH I'D BOUGHT A PANASONIC

ceiling mount picture is upside down

Any Problems: pictureis upside down cant pull up menu to go to osd positionn need help to properly adjust when pushing menu nothing comes up

I have had this projector for about 6 months. I use it in the basement for movies almost exclusively. For the money I would say this is an excellent home movie projector. I am able to control the ambient light in the room. While some light is okay it is definately a better experience in total darkness. A couple things that I do notice are; 1) Dark scenes can be overly dark with little detail 2) You will see Rainbows. I find them tolerable and is dependent onthe movie/scene. Anything with bright white beside a very dark. Overall it is not an issue for me. 3) A scene from a distance that is panning will look at little choppy, again, not a big issue. I built a ceiling mount that I found on this site and modified slightly. Cost about 10 dollars. Displaying on Panoview 84" 4:3 1X1 screen. Was going to build one but this seemed a lot easier and not too expensive. Overall for the money it's great. I expected the few image quality issues with a projector in this price range but am very happy with the actual image. It was not worth the considerable extra money to get a projector that solved the few minor issues. Images that are well lit and resonably close up to the subjects are excellent, as are animated movies. Definatley recommend to someone who wants a decent movie experience at a very good price.

Any Problems: Came DOA. Called BenQ they offered to replace but I went back to vendor and had them ship a replacement. No issues with the second one.