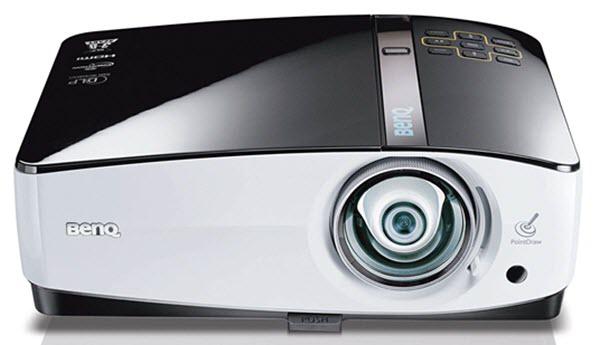 The BenQ MP780ST falls into what's rapidly becoming a distinct subcategory of interactive, DLP-based data projectors built around Texas Instruments' version of interactive technology. These projectors all share some key features, including a short throw, an interactive wand that doesn't have to touch the screen, and the ability to move the projector and then set it up quickly for interactive use without needing to calibrate it.

There are, of course, differences in the details. The MP780ST earns its claim to individuality with its balance of resolution, brightness and price - at WXGA (1280 x 800) resolution, a 2500 lumen rating that measures even a bit brighter than spec in its non-interactive mode and its $1350 street price. The price is low for the resolution class, with an education discount also available.

Interactivity with almost everything you need. If you don't need the interactive feature, you can save money by buying an equivalent projector without it. However, compared to buying a standard WXGA projector plus an interactive whiteboard, the MP780ST is a bargain.

In addition, the MP780ST comes with almost everything you need, including an interactive wand and its own interactive software, QDraw, in case you don't already have an annotation program. The wand also lets you control your mouse pointer, and it includes left and right mouse buttons. For those times when you're not using the interactive mode, the projector's remote offers a laser pointer, which is a nice touch.

No calibration. One of the benefits of TI's interactive technology is that it doesn't need calibration. When interactive mode is turned on, the projector overlays a grid onto the image. The grid is invisible to the human eye, but the wand can use it like map coordinates to tell the projector what part of the image it's pointing to.

Being able to skip the calibration step makes setup a lot faster. Just set the projector in place, and it's ready to work. This makes interactivity far more practical for a projector that you may need to move from room to room or take on the road to give interactive presentations.

Interacting from a distance also means you can stand to one side of the screen or stand next to or even behind the projector instead of in front of it to avoid any possibility of casting shadows. You can even move around the room, which can be particularly useful in a classroom situation, where you might want to move to a student's desk in the middle of a session.

The wand worked at distances of about 30 feet from the screen in our tests. As you might expect, however, it's hard to control what you're pointing at. My experience was that trying to click on a menu command from even 10 feet was usually enough to move the pointer off whatever I was trying to click on.

Short throw. Most interactive projectors offer a short throw or ultra short throw for good reason. It lets you project a large enough image from a short enough distance so you can stand close to the screen without getting in front of the projector and casting a shadow. The MP780ST falls in the short throw category. We measured a 94" diagonal (80" wide) image from 3.2 feet, which is easily close enough to let you stand to the side of the projector and still have good control over pointing the wand.

Surprisingly bright. The MP780ST was a touch brighter in our tests than its 2500 lumen rating. We measured it in its brightest mode at 2548 lumens, which makes it somewhat brighter that many projectors with ratings as high as 3000 lumens. Turning on interactive mode lowers the brightness substantially, to a measured 1486 lumens. However, even 1486 lumens is bright enough to project an acceptably large image that can stand up to the typical ambient light in a small to medium size conference room or classroom. If you turn on Eco mode as well, you may have to lower the lights a bit or settle for a slightly smaller image size - we measured the brightness at 1229 lumens with both modes active - but that's still bright enough so you shouldn't have any serious issues with brightness or image size.

Good data image quality. The test unit's data image quality was more than good enough for any conference room or classroom use. Greens were a little on the dull side, rather than vibrant, but colors were generally well saturated and yellow was definitively yellow, rather than a mustard color. Even with an analog connection, the image was close to rock solid, with exceedingly minor pixel jitter showing only on images that tend to cause jitter.

The projector also handled text well overall. White text on black was almost unreadable at the smallest size we test with. However, it's unlikely you'll ever see this problem in real world use. White text on black is unusual, and we test with a smaller font size than you're ever likely to use. For black text on white, which is far more important because it's more common, the text was highly readable down to and including the smallest size.

Excellent Data Connectivity: The MP780ST offers every connector you're ever likely to need, including an HDMI connector for either a computer or video source. The other choices include two VGA inputs for computers or component video, a pass-through VGA port for a monitor, and both composite video and S-Video inputs. For audio, in addition to the HDMI connector, one of the VGA ports is paired with a stereo minijack, and the two video ports share a single set of RCA phono jacks. In addition, the projector offers minijacks for microphone input and stereo output.

Additional connectors include a 12v trigger to let you lower and raise a screen automatically, a LAN connector and mini B USB port that each let you send data to the projector, an RS-232 port and Type B USB connector that each let you control the projector from a computer, and two Type A USB connectors that let you plug in a USB memory key to read JPG, BMP, GIF, Tiff, and PNG files or connect a $49 optional dongle that lets you display images by WiFi.

Surprisingly Good quality audio. The MP780ST's built-in audio is loud enough for a small to medium size conference room or classroom, with better sound quality than most projectors in its weight class - just 8.4 pounds. For large rooms, however, or if you want to hear the sound in stereo, you'll need an external sound system.

Noticeable variation in brightness across the screen. Short throw projectors often have a problem maintaining uniform brightness from edge to edge. The MP780ST in particular stubs its toe on this issue. We measured the uniformity at 51%, with the brightness falling off over a short enough distance to be obvious even on a Windows desktop. Icons on the dimmest area of the screen were visibly dull compared to the same icons copied to the brighter areas. The difference isn't enough to count as a major problem, but it's enough to be able to see easily. Depending on how much of a perfectionist you are, you may or may not find it bothersome.

Usable, but unimpressive, video quality. The MP780ST's video quality isn't awful for a data projector, but it isn't anything to write home about either. Colors tended to be dull and flat in our tests rather than pop off the screen. In the most demanding scenes I saw a touch of posterization (colors changing suddenly where they should change gradually) in faces. On the other hand, the MP780ST did an excellent job of retaining shadow detail. Overall, the video quality is better than many data projectors can manage, but still best reserved for short clips. This isn't a projector I'd take home from the office on weekends to watch movies.

Obvious rainbow artifacts for video. As with any single-chip DLP projector, the MP780ST has the potential to show rainbow artifacts, with light areas breaking up into little red, green, and blue rainbows when you shift your gaze or an object moves on screen. With data screens, however, the artifacts are so subtle that even those who are sensitive to them should rarely notice any. Unfortunately, the same isn't true for video. In our tests, rainbows showed up frequently enough that some people will find the projector annoying to watch for anything but short clips. That's an important point to keep in mind if you plan to show much video. Even if you're not sensitive to the effect, someone in your audience might be.

Limited 3D. As with other projectors using TI's interactive technology, the MP780ST is 3D ready. However, as with most 3D projectors, the 3D won't work with a Blu-ray player and you can't use it in interactive mode. In addition, you need enough pairs of DLP-Link glasses (at more than $100 each) for your audience. All of this means that, as with competing products, you may or may not ever be able to actually use the projector for 3D.

The MP780ST is one of several projectors built around TI's interactive technology. They all offer similar strengths, including a short throw, no need for calibration, and letting you use any surface as a whiteboard. However, only some of those competitors offer WXGA resolution, which helps the MP780ST stand out a bit. In addition, it , a combination that adds up to an attractive balance of features and price, making the MP780ST a more than reasonable choice.