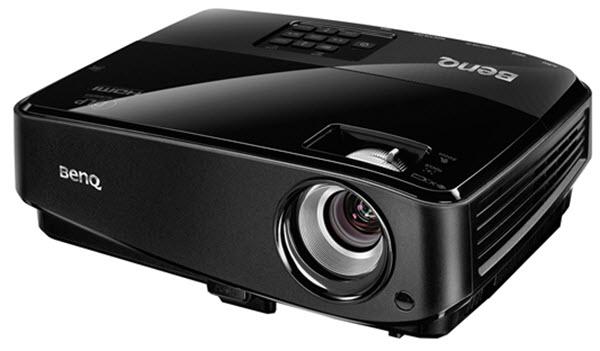 With it's eye-catching low price, at $339 street, and its 2800-lumen rating, the DLP-based BenQ MS517 delivers lots of lumens per dollar. Similar in many ways to the BenQ MW519, which we've reviewed separately, it's basically a variation on the same design at a lower price. The key difference is a lower native resolution, at 800x600 instead of the MW519's 1280x800.

The 800x600 resolution is a poor choice for showing fine detail, whether in the form of data images like big spreadsheets or video at 1080p. However, it's a good choice for simpler data images, like bullet points in a PowerPoint presentation, or for watching video at low resolution but large size.

Weighing only 5.1 pounds, the MS517 is also portable, at only about two pounds heavier than LED-based models with lower brightness and higher prices. Most important is that it delivers more than acceptable image quality for both data and video, although it tends to show rainbow artifacts easily in video. If you need a basic projector, particularly for data, the MS517 can qualify as a bargain.

Near-excellent data image quality. The MS517's data image quality is short of excellent, but not by a lot. Yellow was a little mustard colored in my tests in all preset modes, and in the brightest mode red and blue were both a little dark in terms of a hue-saturation-brightness color model. However, colors were otherwise vibrant and well saturated. Color balance was also good, with suitably neutral grays at all levels from black to white. Bright shades were a touch yellowish in the brightest mode, but not by enough to matter.

More important for data images, the MS517 holds details well. Both black text on white and white text on black was crisp and readable at 7 points. It also helps that the image was as rock solid with an analog connection as with a digital connection, with no pixel jitter even with images that tend to show jitter. Interestingly, the MS517 did notably better than the MW519 for maintaining a jitter and moire-free image with an analog connection even though the data image quality was otherwise similar.

Usable video quality if you don't mind rainbow artifacts. How you feel about the MS517's video quality will depend on how easily you see rainbow artifacts and how much you're bothered by them. As is typical for DLP data projectors, I saw very few with data images, but saw them often enough in some video clips to find them annoying. On the other hand, I tend to see the artifacts easily, and I didn't see them as often with video as with some projectors, including the MW519.

Other than rainbow artifacts, the video quality is best described as watchable. The 800x600 resolution puts obvious limits on how much detail you can see in an HD video. However, I didn't see any posterization, even in scenes that tend to cause the problem, and the projector did better than most data projectors with skin tones and shadow detail. I also saw relatively little noise, with notably less than I saw with the MW519.

Portable. At 4.4" x 11.9" x 8.7" (HWD) and just 5.1 pounds, the MS517 is small and light enough to store away easily when you're not using it or carry with you as a regular traveling companion. Unfortunately, BenQ doesn't include a carrying case, so you'll have to buy one separately.

Long lamp life. Lamp life is longer than typical for the MS517, at a claimed 4,500 hours at full power and 6000 hours in Economic mode. Replacements are $199 direct, which is a massive percentage of the total cost of the projector, but is lower than with many projectors.

More than with most DLP projectors, these measurements only apply to images with white backgrounds, like a word processing document. With color screens, including a Windows desktop with a solid blue background for example, the image is visibly dimmer, because color brightness is significantly lower than white brightness.

I measured color brightness at 686 lumens with the brightest preset mode, and 383 to 676 lumens with the three other presets. As a point of reference, using SMPTE recommendations, the white lumen measurement in the brightest mode would be bright enough for a roughly 226" diagonal image in the native resolution and theater dark lighting, while the color brightness measurement would be suitable for a 113" image.

Brightness uniformity. The MS517's measured brightness uniformity was 52%, which showed as a slight cool spot in the upper right corner. It was easiest to see on a solid white screen, but also visible even with images broken up by text or graphics. Even so, the brightest and dimmest areas were far enough apart, and the change gradual enough, so most people wouldn't be bothered by it.

Acceptable connectivity. The MS517 offers the same set of connectors as the MW519. The one important oversight is the lack of a USB A port for reading files from a USB memory key.

Meager optical zoom. The MS517 claims a 1.1 optical zoom, but it has so little effect on image size that's it's hard to tell which control ring is for focus and which is for zoom. As a practical matter, it doesn't add any real flexibility in how far you can put the projector from the screen for a given size image.

Poor 3D image quality. The MS517 can connect directly to a Blu-ray player or other video device for 3D, but the image quality is wanting, with minor posterization in skin tones, 3D-related judder, and a tendency for dark areas to take on a glossy look--issues I also saw with the MW519. The 3D image was also noticeably dimmer than a 2D image at any given size. And because the 3D works only with 144Hz DLP-link glasses, you can't use any older, 120Hz glasses if you happen to have any.

Low volume audio. The 2W speaker in the MS517 simply has too low a volume to be useful--another problem the MS517 shares with the MW519. Even sitting only about a foot from the projector, I could barely hear the sound. If you need audio, plan on using an external sound system.

The MS517's strongest features are its low price and how much it delivers for that price, including near-excellent data image quality, usable video quality, portability, and a long lamp life. You can get a more capable projector if you spend more, but it will be hard to find one this capable as this price.

On the minus side, if you need good quality 3D you'll want to look elsewhere, and the issues with audio mean that if you need sound you'll need an external audio system. However, 3D support tends to be limited in most projectors, and low volume audio is typical, so neither is a major strike against the MS517. Similarly, if you're sensitive to rainbow artifacts, or worried that someone in your audience may be, the MS517 is the wrong choice for video, but that's only for video, and only if you consider rainbow artifacts an issue.

Compared with the MW519, the MS517's lower resolution may also be an issue, but it largely makes up for that with better quality for both data and video, as well as its lower cost. All this puts the MS517 very much in the running if you need a low-cost projector for a conference room or classroom, a brighter alternative to 500-lumen LED projectors for portable use, or an inexpensive option for home use.

For more detailed specifications and connections, check out our BenQ MS517 projector page.