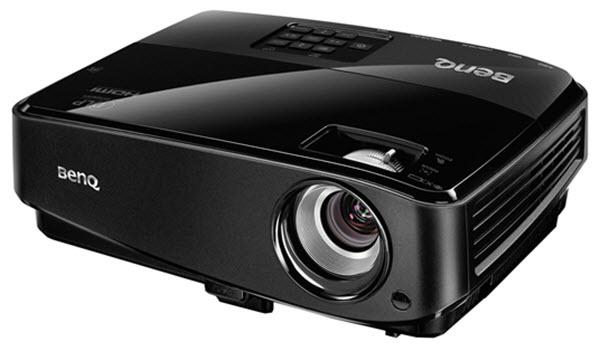 BenQ MW519: A 1280x800 Projector for Classrooms and Conference Rooms

Best described as BenQ's version of a basic (Read: low-cost) 1280x800 projector, the BenQ MW519 offers a 2800-lumen brightness rating and moderately good portability. Built around a DLP-engine, it's physically similar to the 800x600 MS517 that we've also reviewed, with the same, size, weight, and brightness rating, as well as the same set of connectors. The big difference is a higher resolution, which shows in a higher price as well, at $549 street.

The MW519's 1280 by 800 resolution makes it more appropriate than the MS517 for data images with more detail, from larger spreadsheets to more complex line drawings. The resolution also gives it the ability to show 720p HD without having to scale the image and without having to effectively turn off a high percentage of pixels on its DLP chip, which gives up the brightness that goes along with using those pixels.

Among the features the MW519 shares with the MS517 is the 5.1 pound weight, which makes it only about two pounds heavier than, and very nearly as portable as, LED-based models with lower brightness. Aside from the higher resolution, it doesn't do quite as well on image quality as the MS517, but it does a credible job on data in particular. If you need a basic 1280x800 projector, it's certainly worth considering.

Good data image quality. Aside from the obvious differences in resolution, the MW519's data image quality is similar to the MS517's quality, at least in terms of color and crispness. Most colors were vibrant and well saturated in my tests, except for yellow, which was a little mustard colored in all preset modes. Red and blue were also a little darker than they should be, but only in the brightest mode. Color balance was good, with suitably neutral grays at all levels from black to white in most presets, and only a hint of yellowish tinge in the brightest shades of the brightest mode.

The projector also did well with detail, with both black text on white and white text on black crisp and readable at sizes as small as 7 points. One issue for the MW519--which didn't show up with the MS517--was distracting pixel jitter and moire patterns with some images when using an analog connection. Many people will never see this issue, however, because it's most likely to show up in images that use patterned fills of dots or lines instead of solid blocks of color. If you tend to use images that cause the problem, you can still avoid it by using the projector's HDMI connection, assuming your computer offers a digital output.

Portable. At 4.4" x 11.9" x 8.7" (HWD) and just 5.1 pounds, the MW519 is small and light enough to store away easily when you're not using it or carry with you as a regular traveling companion. Unfortunately, BenQ doesn't include a carrying case, however, so you'll have to buy one separately.

Long lamp life. Lamp life for the MW519 is longer than typical, at a claimed 4,500 hours in full power mode and 6000 hours in Eco mode. Replacements are $199 direct, which isn't a notably low cost, but is lower than with many projectors.

Useful optical zoom.The MW519's 1.2x zoom is enough to give you some flexibility in how far you can put the projector from the screen for a given size image. It's also more than the MS517 offers, with its 1.1x zoom.

As with the MS517, and more than with most DLP projectors, these numbers really count only for screens with white backgrounds, like a word processing document. The projector's color brightness is enough lower than its white brightness that color screens are noticeably dimmer, even with images like a Windows desktop for example.

Color brightness measurements for various modes came out to a range of only 328 to 628 lumens. One way to look at these numbers is that 2599 lumens for white brightness would make a word processing document with a white background suitable for a 194" to 263" diagonal screen, based on SMPTE recommendations for theater dark lighting, while 628 lumens for a color image would be bright enough for a roughly 95" to 129" screen size.

Acceptable brightness uniformity. The MW519 delivers near uniform brightness across the entire screen, despite a little lower score on measured uniformity than most projectors, at 66%. That's enough to show on a solid white screen, but with the image broken up by text or graphics, it's hard to see a difference even if you're looking for it.

Acceptable connectivity. The MW519 offers the identical set of connectors on the back panel as the MS517. The one important oversight is the lack a USB A port for reading files from a USB memory key.

Merely adequate video quality. Despite having a higher resolution than the MS517, the MW519's video quality is arguably a little worse overall, largely because of more obvious noise showing in more scenes. On the plus side, I didn't see any issues worth mention with skin tones and shadow detail, and I didn't any posterization in scenes that tend to cause the problem.

Another potential issue, as with any DLP projector, is rainbow artifacts. I didn't see enough to be an issue with data images, but with video, I saw them more often than with most projectors, including the MS517. I also saw them in scenes that I rarely see them in with other projectors. If you see rainbow artifacts easily and find them bothersome, or worry that someone in your audience might, any video you use with the MW519 is best limited to short clips.

Low volume audio. Another shortcoming the MW519 shares with the MS517 is its 2W speaker delivering too low a volume to be useful. If you need audio, you'll want to use an external sound system.

Ultimately, the MW519 succeeds as a low-cost, light-weight and portable, 1280x800 data projector. There's nothing particularly outstanding about it, with the possible exception of the low price, but it can certainly handle its basic job well enough to be useable, with more than acceptable data image quality, a longer than typical lamp life, and nearly as good portability as LED projectors with lower brightness and, in some cases, higher prices.

The limited 3D support and low volume audio count as minor issues at worst, given that the MW519 shares both with most inexpensive projectors. Potentially more important is the relatively low video quality, with the frequent rainbow artifacts an issue for anyone who considers rainbow artifacts a problem.

For more detailed specifications and connections, check out our BenQ MW519 projector page.