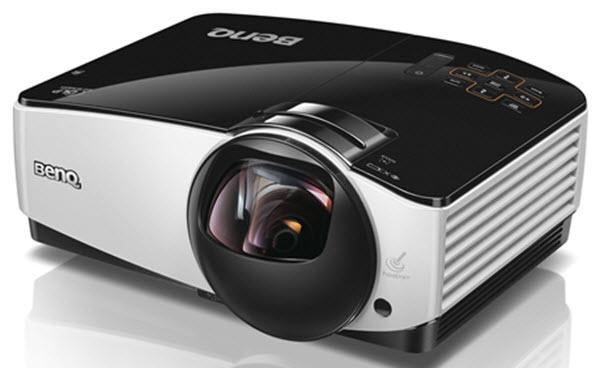 Subscribe
M. David Stone
SHARE
M. David Stone
M. David Stone
BenQ MW860USTi WXGA DLP Projector
Price
$2,499 MSRP Discontinued
Just because the BenQ MW860USTi came in at sixth place out of six in our Interactive Projector Shootout doesn't mean it can't do the job it's meant for. At $1,499 street, with the mount optional at extra cost, it's the least expensive of the 1280x800 models we looked at, and it would be surprising if it could fully match its more expensive competition. Note too that some issues that drag down its score may not matter for your purposes. For example, it doesn't handle video well, but if you don't use video clips, that's not a concern. The real question is whether it's a reasonable choice for the price, and the answer is that it can be.

Data image quality. Data image quality for the BenQ MW860USTi (hereafter, "MW860" for easier reading) is best described as usable but far from impressive. Very much on the plus side, it holds detail better than any other 1280x800 projector in this group, with black on white text easily readable at 7 points and white on black text easily readable at 8 points. In addition, rainbow artifacts are far fewer, more fleeting, and less obvious than with the other DLP projectors, so that even if you see these artifacts easily you're not likely to be bothered by them.

Unfortunately, the overall data image quality is dragged down by colors that are fully saturated but dull and dark (in terms of a hue-saturation-brightness color model) to the point of being muddy. All the DLP models we looked at share this problem to some extent, but it was most extreme with the MW860.

Interactive features. Like all projectors with TI's DLP-based interactive technology, the MW860 doesn't need calibration and doesn't need the pen touching the screen. One minor issue I saw was a slight lag between moving the pen and seeing the result on screen, whether I was touching or not. It's not hard to get used to, but it's not as comfortable, or as immediately natural, as using a pen with no lag at all.

Also worth mention is that the MW860 offers a dual pen mode, so two people can annotate the image at the same time. The second pen is a $99 option, however, and BenQ didn't provide one for testing, so we have no way to know if it works as well as the Epson 485Wi's dual pen mode.

Interactive software support. BenQ gears its interactive software primarily towards Windows. The projector comes with Windows annotation software only, it fully supports Windows 8, and it doesn't need a Windows driver. BenQ says that it doesn't need a Mac driver either, but older Macs may need a patch, which is on the projector's installation disc. You'll have to get Mac annotation software elsewhere.

Video image quality. If you need a projector for video, the MW860 is the wrong choice. When we looked at video from all six projectors in this shootout side by side in both their brightest modes with reasonable color quality and their best color modes, it was immediately obvious in both cases that the MW860 was the least watchable. With either preset, its colors tend to be muddy. There's also a slight overscan that we couldn't find any way to turn off, so the projector loses some of the image along each edge. Video with the MW860 is best limited to short clips if you use it at all.

Installation and maintenance. The MW860 ties for fourth place with the Dell S500wi for ease of installation. It also ties for fourth place with the Sony SW535C for ease of maintenance. For installation, it offers the convenience of separate adjustments for roll, pitch, and yaw, but no way to adjust the horizontal or vertical position of the image. For maintenance, it offers a lamp life of 2500 hours in standard mode and 4000 hours in Eco mode, but replacing the lamp requires removing and reinstalling three screws.

Connections. The back panel on the MW860 offers a fairly typical set of connectors:

The BenQ MW860USTi's ability to hold details well can easily trump the issues with color for anyone who needs to show detailed images or relatively small text. It also shows rainbow artifacts less often than the other DLP projectors we compared it with, while still offering the strengths of TI's approach to interactivity. There's no calibration needed, no need to touch the screen, and you even get 3D-support, although you can't use 3D and interactive modes at the same time. Factor in the relatively low price, and there's enough here to make the BenQ MW860USTi a more than reasonable choice for the right application.

For more detailed specifications and connections, check out our BenQ MW860USTi projector page.