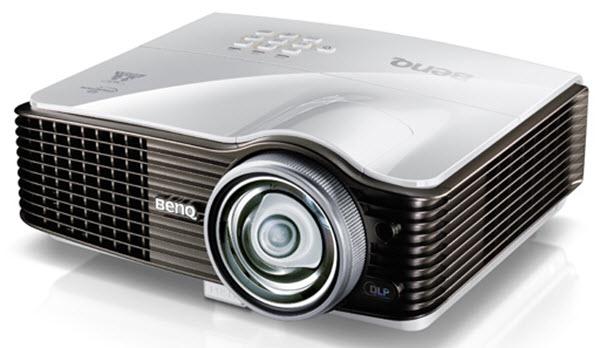 BenQ makes a strong statement with the MX812ST by providing over 3,000 real world lumens and many advanced features in a short throw package. The MX812ST does not compromise image quality to achieve a short throw. The projector provides a sharp, nearly distortion free image with a brightness uniformity comparable to standard lens designs. Packed with features, this projector can run computer-free presentations and includes multiple options for remote control, monitoring and image display. With a street price of around $1,600, it is not the lowest cost XGA resolution projector, but it is a good value when compared with the competition on image performance, brightness and features.

The MX812ST is a good fit for a classroom, as it only needs a small amount of floor space to project a big image. A 100" diagonal image is projected at a distance of just 4 feet. For the classroom, I recommend combining the projector with a mobile cart to help accommodate the fixed lens design. The MX812ST has a relatively large 15% image offset where the image starts above lens center. Using the projector's adjustment feet along the auto keystone feature helped to quickly align the image to the screen. At the maximum keystone setting, I was not able to find any obvious image distortion, even on small font text.

At my main office, we have a number of small focus-rooms for groups of about three to four people. This setting was ideal for the MX812ST, as the short throw design allowed us to eliminate the awkward sharing of information using small laptop screens. Placing it on a table about 2 feet from the wall, we were able to project a very bright image about 50" in diagonal. In addition to working well in the small conference room, this projector would be a great way to add a large screen to an executive office.

The short throw of the MX812ST would work well with a ceiling mount installation. Having the projector close to the screen minimizes interference between the presenter and the audience, allowing for a more interactive presentation.

Lens Quality/Sharpness: Lens quality was good, especially compared to other short throw projectors I've reviewed. I was able to dial in a razor sharp focus and actually preferred the image with a slight defocus when the viewing ratio (viewing distance from the screen divided by screen width) was less than 1.5. The slight defocus of the lens significantly reduced pixel structure with only a minor reduction to the overall perceived image sharpness.

Brightness: The MX812ST is a very bright projector measuring 3,366 ANSI-lumens or an excellent 96.2% of the 3,500 lumen specification. Maximum light output was achieved by using the Normal lamp, Brilliant Color on and the Dynamic image preset. I tested the projector with screen sizes up to 150" in diagonal (or 120" wide) in a well lit room with positive results. I found brightness at this large size acceptable, but care should be taken to minimize any direct light hitting the screen. Brightness uniformity was slightly above 79%, above average as compared to many short throw projectors.

With nearly 3,500 lumens to start with, it may be too bright for smaller screen sizes and low room lighting. If image brightness is excessive, one can switch to ECO lamp mode and drop peak brightness by about 15% to 2,892 lumens. Alternatively, in normal lamp mode, the Cinema preset provided approximately 570 lumens and sRGB reduced brightness to only 350 lumens.

Video Quality: Video performance exceeded expectations. In a dark, light controlled room, color reproduction and black level was most pleasing in the Cinema mode with the Brilliant Color off. However, when testing in my well lit living room on Sunday afternoon, I preferred to watch HD NFL football with Brilliant Color on. Color accuracy was slightly affected, but the additional light output made it a worthwhile compromise for this type of non-critical viewing. The one negative to video performance was the inability to adjust Sharpness when using an HDMI signal. Video noise (especially noticeable on cable television) was greater than expected and was likely accentuated by an aggressive default Sharpness value.

Display Connection Options: The MX812ST has a complete input panel that includes standard computer and analog video inputs, monitor pass-thru and a HDMI input for digital video and audio. Additionally, the projector can connect to a computer via a wired or wireless network using the BenQ "Q Presenter" software which provides full control of all projector functions as well as the ability to display up to 4 computer desktops at once. It can also connect as a computer display via a USB connection by using the "USB Display" software and supports computer less presentations by displaying image files directly from a flash drive.

Image Performance with different inputs:I compared picture quality from all connection modes using a direct HDMI to computer connection as a reference, with the exception of the wireless connection (our review sample did not include the required optional wireless dongle). For static images, all connection methods were nearly identical in picture quality. Text and static images were clear and readable, displayed with full color depth and no extra digital noise noted.

Video was a different story, with both the USB and wired LAN connections breaking down when video was displayed due to bandwidth limitations. Stuttering and frame tearing were noted during testing. Video was rendered at frame rates closer to a slide show than full motion video. In terms of transitions on presentation slides, I noticed a small amount lag and image tearing, but it was not distracting.

In terms of ease of use, displaying pictures from a USB flash drive was the most straightforward. The USB drive was immediately identified as an image source and was selectable using the source (or auto input) remote or projector keys. Setting up the USB display connection was true plug and play, only requiring a few clicks through pop-up windows to complete the initial software installation.

Audio Quality: The projector contains dual 10W speakers in a mono configuration. Any stereo input is down mixed and output as mono. Sound quality was impressive and useable for a small to medium sized room. The projector also includes a 3.5mm microphone input, that can be used to mix in speech with any other audio. During testing with a headset microphone, I found the ability to adjust the microphone output independently of the total projector audio output to be a valuable and useful feature.

Fixed Lens: Image size of the projector can only be adjusted by moving it away from or closer to the screen as it does not have a zoom lens. Care should be taken to make sure the throw distance will accommodate the required screen size and space limitations. Generally, the short throw design of the MX812ST will be best suited to a smaller space or on a movable mount such as a classroom cart.

Rainbow effect: I am not overly sensitive to the DLP rainbow effect, however I noticed them rainbows on occasion when testing the MX812ST. The degree of the rainbow effect was highest when viewing video in Dynamic mode. I did not notice any rainbows during slide transitions, even with extreme amounts of animation.

3D implementation: I tested the MX812ST with 3D Blu-Ray based video using PowerDVD 10 and the NVIDIA 3D vision system. Unfortunately, engaging the 3D mode sets the image preset to Dynamic and locks out adjustment of all picture settings such as brightness and contrast. Due to this limitation, all 3D images suffered from a washed out image quality and elevated black level. I was able to mitigate the negatives by adjusting the computer display properties, but this is not an ideal solution as it crushes detail at the high and low ends. While an elevated black level was most noticeable in a light control room, I still found the elevated black levels distracting in 3D mode when viewing in a normally lit room.

Aside from the picture adjustment limitations, no other 3D issues were identified. The projector was able to faithfully recreate the third dimension with a minimal amount of ghosting, bringing a substantial degree of depth to the viewing experience. While the projector does not support a direct connection to most 3D sources such as 3D capable Blu-Ray players or cable boxes, it is a viable option for computer based 3D applications.

Lamp Life: The MX812ST is rated for 2,000 hours of lamp life in Normal mode and 3,000 hours in ECO mode. This could be considered a limitation if compared to projectors that offer a 4,000 hour or greater lamp life.

If you need a bright projector with a high quality image in a short throw configuration, the BenQ MX812ST is worthy of close consideration. It not only excels at displaying sharp and punchy static images, it also does a first-class job with video reproduction. It includes many options to accommodate the entire span of users from advanced network administrators to the entry level plug and play presenter. While the sophisticated feature set does come with a bit of a price premium and 3D performance was not without issues, the overall performance of the BenQ MX812ST is exceptional. If you want premium quality and are willing to pay a bit extra for it, this may be the projector for you.

For more detailed specifications and connections, check out our BenQ MX812ST projector page.

Comments (1) Post a Comment
Rennie Abraham Posted Feb 20, 2011 10:08 AM PST
We would like to use two of these projectors, with image blending (software) to project a 20ft wide, 10ft high screen. The room seats about 150 people. The presentation is mostly text on video backgrounds and occasionally movies. Due to the short distance of our stage, band members and existing physical obstructions, we can only do a max of 9ft from the screen.

Thanks for the help.