Bowers & Wilkins has announced a partnership with Chinese projector manufacturer Formovie, a Xiaomi company. This will be the first projector to incorporate B&W's audio expertise—a brand best known for their award-winning high-end home theater speakers and partnerships with Philips and luxury car brands such as BMW, Maserati, and McLaren. Over the past couple years we've begun seeing similar partnerships of projector and audio companies for lifestyle and ultra-short throw projectors, most notably Harman Kardon systems found in VAVA's 4K and Chroma ultra-short throw projectors and the Epson EpiqVision Ultra LS300W with Yamaha speakers built-in. The Formovie T1—launched in December 2021 and initially only in mainland China—has two forward-firing 70 mm glass-fiber woofers for the low and mid frequencies. Two 20 mm titanium tweeters accompany them for highs. The speakers are positioned at the front edges of the T1 for increased soundstage width and all the speakers have their own ABS+GF (glass-fiber reinforced ABS plastic) enclosures. The two woofers are ported to the sides of the projector and incorporate B&W's Flowport technology, which reduces turbulence and extraneous port noise. A proprietary high-transparency mesh protects the speakers. 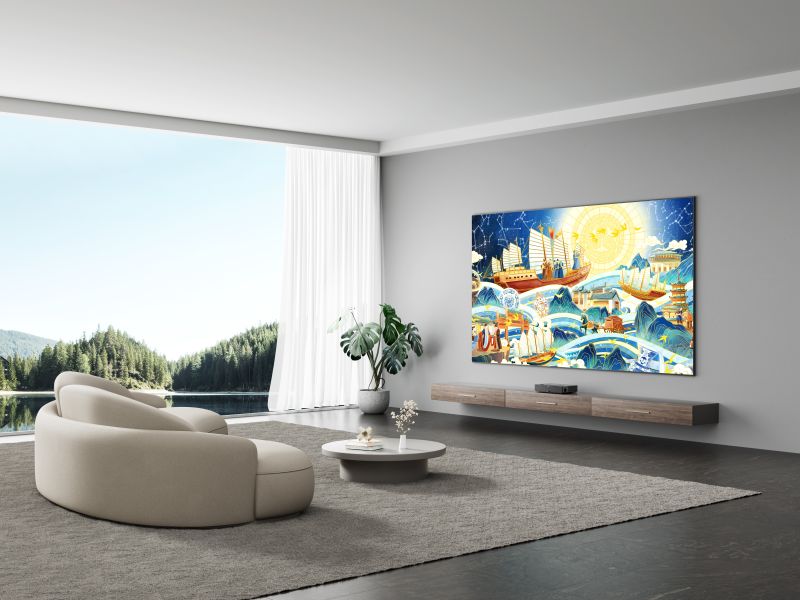 The speakers are powered by a 2 x 15-Watt TI amplifier and Dolby MS12 decoder. There are multiple discrete sound modes available that were all specifically tuned by B&W. Also included is decoding for Dolby Atmos and DTS-HD.

As for the visuals, the T1 is a TriColor ultra-short throw laser projector. It has a single TI DLP chip and uses XPR pixel-shifting technology to achieve a 4K image. The laser light source has a life of 20,000 hours with a rated light output of 2,800 ANSI lumens. It can project a 100-inch image from just under 7.9 inches and is capable of sized from 80 to 150 inches. The Formovie T1 is the first THX-certified UST projector and supports Dolby Vision, HDR10, and HDR10+.