Viewsonic greeted showgoers at CES with 4 new lifestyle projectors designed for home and portable use. 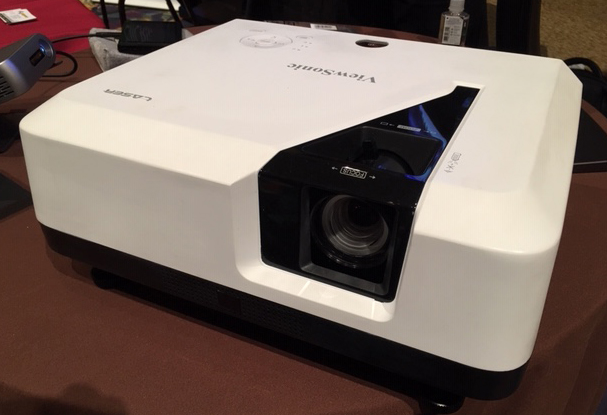 Among the offerings is the LS700-4K and LS700HD, a pair of laser-driven tabletop or ceiling mountable projectors offering the same classic projector form factor but 4K UHD resolution (3840x2160) or Full HD (1920x1080) resolution, respectively. With a 1.3x optical zoom and typical throw range of approximately 8 to 10 feet, these DLP projectors are intended for either business or home use; both boast 3,500 lumens of brightness and up to 20,000 hours of usage for the mercury-free light source. The 360-degree orientation function allows further flexibility in placement.

The LS700-4K UHD model offers support for HDR10 content. The LS700-4K further offers an integrated smart TV platform that allows the projector to directly stream content from the internet from some of the popular services. The LS700HD, meanwhile, is said to feature low input lag suitable for gaming. Both support 1080p 3D playback, and both feature ViewSonic's SuperColor technology to enhance image quality. A comprehensive jack-pack includes two HDMI ports, two RGB computer inputs and a monitor output, composite video, and both USB-A and micro-USB inputs, as well as an RS-232 serial port for control.

Viewsonic's new X Series projectors are both DLP 4K models intended for entertainment and offering up Amazon Alexa and Google Voice Assistant control as well as an integrated Smart TV platform with access to the Android Aptoide store for popular apps. These projectors have a long-lasting LED light source rated for up to 30,000 hours. Both feature Rec.709 color accuracy but with HDR content support, and each has a Frame Interpolation function to reduce motion blur. Connectivity options include HDMI 2.0/HDCP 2.2, USB 2.0 Type A and Type C, Audio In/Out and RJ45 Ethernet. 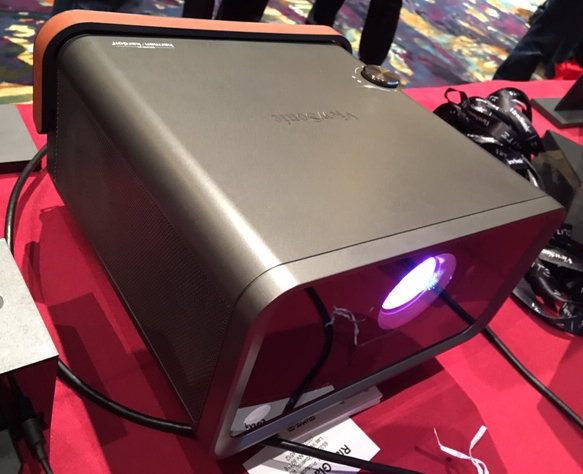 Beyond these similarities, the X10-4K and X1000-4K have very different form factors. Featuring an unusually compact and portable case, the short-throw X10-4K is easily pulled from storage for impromptu movie nights or transported with its convenient integrated carry handle to alternate locations. It's rated for 2,400 lumens and offers both Wi-Fi connectivity and Bluetooth that allows its integrated Harman Kardon speaker system to be used for music playback from a phone. 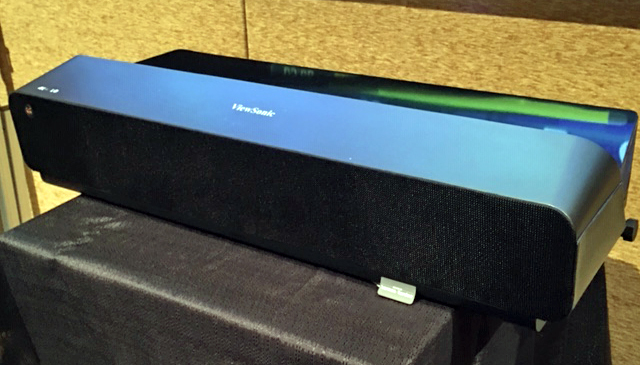 The X1000-4K, on the other hand, is a console-style ultra-short throw (UST) projector with a 0.25 lens for mounting directly below the screen. It offers 2,200 lumens and projects an image of up to 100 inches. Its integrated Harman Kardon soundbar goes well beyond typical projector sound systems to fill a room with high quality movie audio playback, or with music via a connected source, the built-in Wi-Fi streaming, or a Bluetooth connection.

Comments (18) Post a Comment
What Haveyou Posted Jan 10, 2019 1:15 AM PST
Are these REAL UHD, or interpolated jitter-shifted "UHD"?
Rob Sabin, Editor Posted Jan 11, 2019 1:43 PM PST
These projectors use the DLP XPR chipsets that use pixel-shifting of native 1080p array micromirror devices to bring all the pixels in a UHD signal to the screen. Visual differences we've observed between these chips and native 4K imagers are virtually indistinguishable all other things being equal, and more reliant on the optics and signal processing than the imaging device.
Jason Posted Jan 13, 2019 6:44 PM PST
Hi Rob,

Does X1000-4K use 0.47 or 0.66 dlp chip? How about the latest ust models from LG and Optoma? Thanks.
Rob Sabin, Editor Posted Jan 14, 2019 6:21 AM PST
Good questions, Jason. I don't have that information immediately available to me, but I'll look into it.
Andrew Posted Feb 2, 2019 7:30 PM PST
Other sources have sited the X1000-4K at $2,800 USD. Was this a typo? Has pricing been finalized?
Rob Sabin, Editor Posted Feb 10, 2019 10:04 AM PST
I was working off information fed to me at CES, and I assume the quote in the story was a street price. I'll see about confirming.
Ninetrips Posted May 22, 2019 6:49 AM PST
The ls700-4K boasts some pretty enticing specs. Will you be doing a full review? Crossing my fingers the answer is yes.
Rob Sabin, Editor Posted May 22, 2019 7:28 AM PST
We think so, too. Waiting for it to be released.
Michael Posted May 23, 2019 4:17 AM PST
Itâs often difficult to get a true perspective of how bright these projectors are based on the differing units of measurement. According to your article, 2200 lumens; meanwhile, its listed as âLED lumensâ on their website. Please, can you comparably quantify this in Ansi lumens? I want to place an order on this projector, but need some clarification on its ability to function in daytime.

Thanks
Rob Sabin, Editor Posted May 23, 2019 6:18 AM PST
Michael,I assume you're referring to the X10-4K, which is now showing on Viewsonic's website as 2,400 LED lumens. Specs issued as LED lumens reflect the fact that LED projectors may have higher apparent brightness than their ANSI lumen measurements suggest, for a couple of different reasons explained in this article. Other than assuming that an ANSI measurement will likely be some amount lower, there's no way to really quantify it. I assume Viewsonic is suggesting that the projector's perceived brightness will be about equivalent to a 2400 lumen lamp-based projector. At some point, we hope to review this model and can speak more definitively about it's brightness in ambient light at different image sizes.
Michael Posted May 23, 2019 3:04 PM PST
Yes, I was referring to the X10-4K. Many thanks for your reply. I look forward to reading your review on the unit.
Jarod Posted Jun 14, 2019 7:53 AM PST
Both of the LS700's have been released and are now for sale - The 4k version looks very enticing. Can we expect a review soon?
Rob Sabin, Editor Posted Jun 17, 2019 9:14 AM PST
Jarod, we've requested the 4K version and are waiting for a sample.
Self Righteous Posted Jul 12, 2019 12:39 AM PST
ViewSonic seem reluctant to publish full specifications of these models. Do you have any info please?
Rob Sabin, Editor Posted Jul 12, 2019 8:57 AM PST
The LS-700 models are released and full specs are available on the Viewsonic website. Ditto for the X-10. The X-1000 is still a work in progress.
Raj Posted Jul 17, 2019 2:03 PM PST
Which is better ( ViewSonic X10-4K Vs the BenQ TK800 ) ? I'm mostly interested in color accuracy ( RGBW or RGBRGB, brightness, and HDR capability ) . Thanks.
Rob Sabin, Editor Posted Jul 17, 2019 2:25 PM PST
Raj, these are very different animals. X10-4K is very much a portable lifestyle projector with a fixed lens while TK800 is more intended for broader placement flexibility and high performance home theater use. We are working on our review right now of the ViewSonic and will have more definitive info on how it performs sometime in the next few days.
Greg Posted Jan 20, 2020 3:51 AM PST
So the X1000 was shown last year and then again this year at CES 2020, what is the hold up. you would think that by now they would have production ready for the product. I believe this is going to turn into another netatmo wireless doorbell, still hasnt come to market after how long?