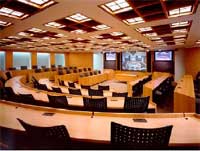 Available in sizes up to 120â x 204â, the VistaGlas 130TM can be cut to any aspect ratio or shape to meet your particular application. With substrates ranging in thickness from 1/8â to 2.0â and thicker, the VGS 130TM can be used for both conventional boardrooms as well as special applications. Installed in a wall or suspended above a tradeshow floor, the VGS 130TM is one of the most versatile & economical rear screens on the market today.

VistaGlas 130TM is the result of years of R&D to come up with the perfect diffusion screen formulation for todayâs budget-minded rear screen systems. For use with most contemporary projection systems, the VGS 130TM makes great images for a variety of applications. If youâre interested in a cost-effective rear screen that will make your projector shine, be sure to specify Custom Display Solutionâs VistaGlas 130TM for your application.

The dealers listed below are hand-picked by our experts and all have long standing relationships with us. Don't just take our word for it, read the hundreds of user reviews or call one of their knowledgable experts!

Your Canadian Screen Superstore. We guarantee fast shipping, and we guarantee better prices than any competitor. Save hundreds on screen prices and get the excellent performance you want!
Eastporters Audio Video
Canada Worldwide Seller