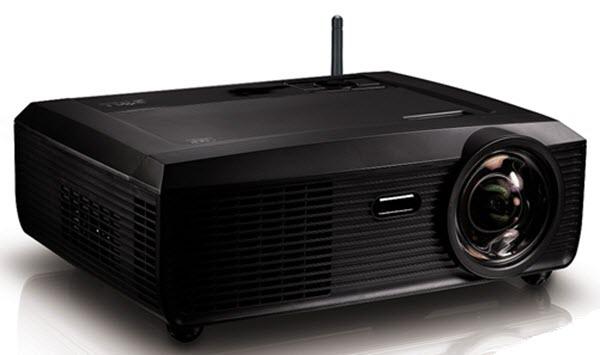 The Dell S300wi Wireless Interactive Projector advertises its key feature in its name: It is interactive. Its interactivity lets you turn any surface into what amounts to an interactive whiteboard without needing anything but the S300wi and the included interactive pen. The projector also offers a short throw, which makes the interactivity more useable by minimizing the shadows you'll cast when you're standing in front of the screen.

One leading edge feature Dell left out of the name is that the projector is 3D-ready. Beyond that, it offers WXGA (1280 x 800) resolution, a 2200 lumen rating, a WiFi connection option, and a compact size suitable for either mounting permanently or keeping on a cart for room to room portability. If you need a data projector with interactive capability, whether in a business or educational context, the S300wi delivers everything you need at the bargain price of $1,499.

It's Interactive. Interactivity is the S300wi's major attraction and the only argument for spending about a third more for it than for a comparable projector that isn't interactive. The S300wi uses interactive technology developed by TI, which is based on the projector superimposing a grid on the image. The grid is invisible to the human eye, but the pen can see it, so the projector knows exactly which pixels the pen is pointing at.

As you would expect with any interactive feature, you can use the pen both as a mouse and as a drawing tool to let you write notes or annotate existing documents. For software, Dell includes eInstruction INTERWRITEWORKSPACE. This is geared towards educational use, but it works just as well as an interactive annotation program for business.

No Calibration. Because the S300wi knows where the pen is pointing relative to the pixels in the image itself, rather than relative to the screen, it has the advantage of eliminating the need to calibrate the image to the screen. Move the projector, point the pen to the same place in the image, and the projector will know that you're pointing at the same pixels. Some competing products don't have this advantage.

In addition, because the pen only needs to point at the screen, much like a laser pointer, rather than touch it directly, you can stand at one side of the screen and interact with something on the other side simply by pointing to it. You can also step back and interact from some distance. Dell says you can use the pen from as much as 30 feet away, although I found the connection unreliable from more than about 15 feet.

Short throw. Short throw projectors let you project a large image even in a small room, and they minimize the risk of casting shadows from people standing between the projector and the screen. For interactivity, this is particularly important, since you'll most likely be standing near the screen to interact with it.

The S300wi does well on this score. Using the native 1280 x 800 resolution, Dell claims it will throw a 60" diagonal image from 2.2 feet or a 90" image from 3.3 feet. We measured a 93" diagonal (78" wide) image from 3.4 feet. The combination of the short throw plus the ability to interact without actually touching the screen lets you stand next to or behind the projector, where you won't cast any shadow at all. I found I needed to stand right at the screen for the kind of fine control that let me write legible text. However, Dell says that people tend to get better control from a distance with time, without making any special effort beyond simply using the pen.

Good data image quality. The S300wi's image quality for data is more than acceptable for presentations and educational applications. Colors are generally well saturated, but a touch too dull to qualify as vibrant, with green leaning towards olive drab and yellow a touch mustard colored. Similarly, black text on a white background is easily readable at sizes smaller than you'll probably ever use. Also worth mention is that the image was as rock solid with an analog connection as with a digital connection, even for images that tend to bring out pixel jitter.

Acceptably bright image for a small- to mid-size room. The S300wi is bright enough for a small to mid size classroom or conference room with the lights on or suitable for a larger room with the lights off. We measured the brightest mode at 2080 lumens, a respectable 95% of the 2200 lumen rating. For the highest brightness, however, the interactive feature has to be off. Turn it on, and the brightness visibly drops.

With the interactive feature engaged, we measured the brightest setting at only 1800 lumens. We also saw a smaller range of lumen output using the preset options, at 1510 to 1800 lumens with interactivity activated, compared to 917 to 2080 lumens with it turned off.

Good connectivity. In addition to letting you connect to a computer using WiFi, the S300wi offers a full set of other connection choices, including one HDMI port for a computer or video source, two VGA ports that can each connect to either a computer or component video source, a VGA pass-through port, and both S-video and composite video inputs. You can also send data over a wired network, using the projector's LAN connector, or by USB, using its USB B connector.

There are two other USB connectors on the back of the S300wi as well. One mini USB B port lets you connect to your computer with a supplied 15 foot cable which Dell recommends using for quicker interactive response even if you connect wirelessly to your computer. The other lets you plug in a USB memory key to read JPG files and Presentation To Go files directly off the key.

For audio, there's a set of two RCA phono plugs for stereo input, a miniplug stereo input, miniplug stereo output, and a third miniplug port for a microphone. You can use any of the audio inputs with any data or video connection, but you have to manually choose the port: HDMI audio, one of the separate audio inputs, or the microphone. Finally, there's an RS-232 port for controlling the projector through a computer or third party controller and a 12v trigger switch for automatically lowering and raising a screen when you turn the projector on and off.

Surprisingly good audio. Too many projectors in the S300wi's weight class (6.9 pounds) include largely useless audio systems. The S300wi's 8-watt mono speaker delivers a slight sense of a bottom-of-the-barrel echo effect, but otherwise offers surprisingly good sound quality and enough volume to fill a medium size conference room. For a large classroom, however, you may want to use an external sound system.

Sluggish interactive response. One minor issue is somewhat sluggish response for the interactive feature, so the visual feedback for whatever you're doing tends to be a split second behind where you actually are. This can be a little frustrating at first, but it's easy enough to adjust to after using the interactive pen for a short time.

Below par brightness uniformity. The S300wi doesn't maintain uniform brightness across the screen, which is a common problem for short throw projectors. We measured the brightness uniformity at 57%, with the difference clearly showing on a solid white screen as a relatively bright area at the bottom center of the image. However, few people will find it distracting.

Usable, but low quality, video. Overall, the S300wi's video quality was good enough to be usable, but far from impressive. Colors seemed a little harsh, and images were a little dark overall, with a noticeable loss of shadow detail in dark areas. We also saw slight posterization in skin tones in some scenes, with shading changing suddenly where it should change gradually.

Moderately obvious rainbow artifacts. Because single-chip DLP projectors show their primary colors sequentially rather than all at the same time, they have the potential to show rainbow artifacts, with light areas breaking up into little rainbows when you shift your gaze or an object moves on screen. The S300wi is less prone to this rainbow effect than some other current DLP models, but more prone to it with video images than with data. It's unlikely that even those who are sensitive to the effect will find it annoying for data, but they may consider it annoying for long video sessions.

Limited 3D. Dell doesn't highlight the 3D-ready feature, because the interactivity doesn't work in 3D mode, but there are other limitations also. There are currently a number of competing 3D transmission formats, so the question is which versions of 3D it's ready for. Dell says that the S300wi (like most low cost 3D-ready projectors) works only with 3D-ready computers equipped with a Quadbuffered, Open GL 3D-compatible graphics card. Note too that you need enough pairs of DLP-Link glasses (at more than $100 each) for your audience. In short, the 3D feature may or may not be something you can take advantage of.

Despite a few shortcomings, most notably the sluggishness of the interactive response, the S300wi is a tremendously attractive bargain, especially if you need an interactive projector that you can move from place to place. The combination of the short throw and not having to calibrate makes it easy to set up quickly, and it's light enough so you could even take it on the road. It's certainly bright enough, and offers high enough data image quality and sound quality, for its intended use. But its real attraction is that it's a complete interactive solution with a balance of portability and affordability that, for now at least, is hard to beat.

For more detailed specifications and connections, check out our Dell S300wi projector page.