How Digital Projection Brought Pompeii to Life in Paris 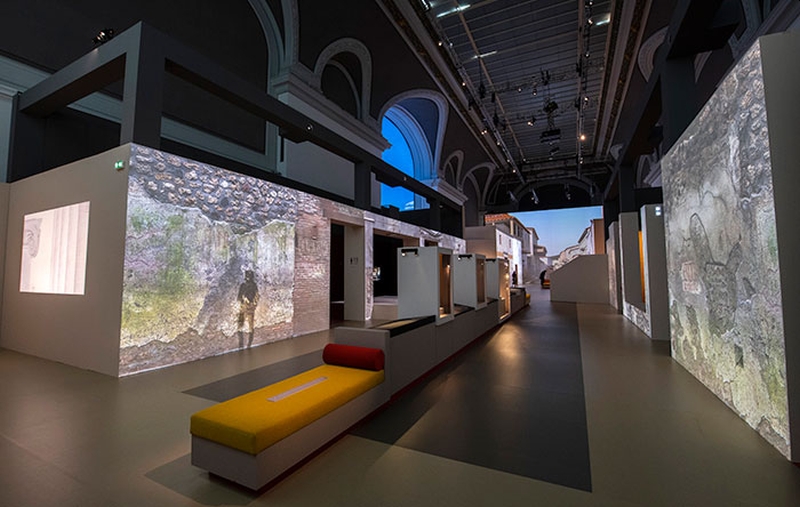 Created in collaboration with the Pompeii Archaeological Park and Gedeon Programmes, the RÃ©union des MusÃ©es Nationaux - Grand Palais' Pompeii exhibition last year was created to present the historical city before, during and after the dramatic eruption of Mount Vesuvius.

The idea to create an immersive experience of Pompeii was envisioned by StÃ©phane MilliÃ¨re, president of Gedeon Programmes and producer of Pompeii-related docu-drama, Les derniÃ¨res heures de PompÃ©i—which was broadcast on France 5 TV channel earlier in the year—and in collaboration with the RÃ©union des MusÃ©es Nationaux et du Grand Palais (Rmn-GP). "After visiting the exhibitions at the Institut du Monde Arabe (IMA, Arab World Institute) and the work of the Light Workshop, I realised that with the 4K images and the rich audio-visual material we had already produced, we had the opportunity to create an exhibition that would place the visitors at the heart of these exceptional excavations," MilliÃ¨re said.

Set in a huge 1,200sqm space with an 18m ceiling height of the Salon d'Honneur of the Grand Palais, visitors were immediately plunged into a Pompeiian piazza, circa 79 A.D. This area—which housed a statue and giant projection screen depicting the momentous eruption at set intervals—then split off into two streets. The scenography of the streets with the domus (houses) created a walk-through setup which contained other types of projection, including 3D models of period buildings, which were created by AristÃ©as and further enhanced the degree of immersion already engendered by the video screens. Roei Amit, director of Digital for Rmn-GP, commented: "One of our methods for this exhibition was to focus on staged projections within an architectural design. AV technology is of growing importance in exhibition spaces; having a strong digital component offers us many possibilities, broadens our modes of expressions and ultimately benefits the public and its engagement." 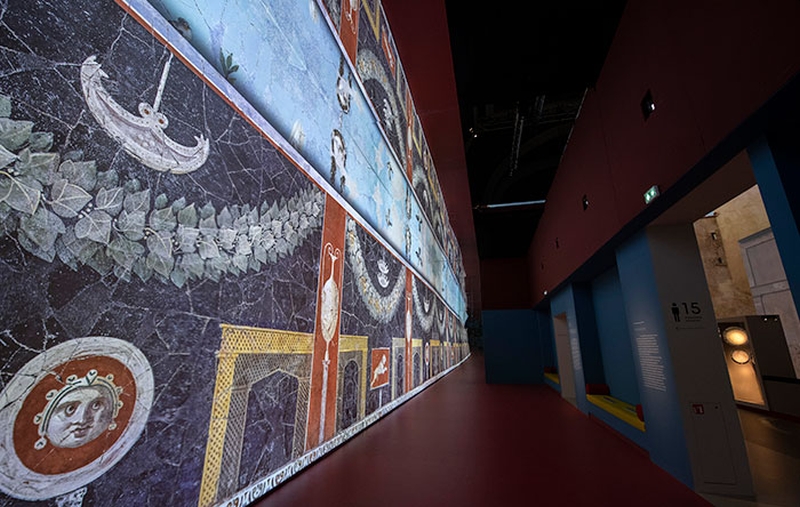 "Visitors enter this gigantic space and face an architectural space of projections," Amit explained. "The projection screens give perspective, extending the streets at their ends, and the walls of the street domus serve as a projection support. Video projection also appears inside each domus; a total of 31 x 4K video projectors were installed to support this."

The 31 projectors used in the exhibition were Digital Projection's E-Vision Laser 11000 4K-UHD, as chosen by ETC Onlyview. These powerful single chip DLP projectors boast an impressive 10,500 lumens, which ensured plenty of brightness against any ambient light in the exhibition, while the 4K-UHD resolution meant that visitors could get up close to the projections to grasp all the clarity and details of the content. The installation also benefited from the flexibility of the projector's MultiAxis orientation, which was essential as a number of them were mounted in portrait mode or pointing down. Built-in edge blending also enabled large seamless images, immersing the visitors in the day to day life of Pompeii.

Four E-Vision Laser 11000 4K-UHD projectors were rigged on both ends of the exhibition to project a perspective of a Pompeiian street, which immediately immersed visitors as they entered the exhibition. Two domus flanked each side of the street and benefitted from video-mapping on their outside thanks to a couple of projectors projecting across the street on each of the four facades.

The piazza is arguably the cornerstone of the exhibition with a projection of Mount Vesuvius in the background comprising two Digital Projection 4K projectors.

Inside each domus, visitors familiarized themselves with the story of Pompeii. Domus I gave a generic presentation of Pompeii with the help of three 4K projectors each projecting on a purpose-built wall. In Domus II, visitors learned about the archaeological excavations over the years, thanks to an E-Vision Laser 8500 WUXGA projector coupled with an ultra-short 0.57 lens, while Domus III hosted more artifacts with two further 4K projectors describing the analysis of the excavations: one projector projected images on the floor using another 0.57 ultra-short lens, while another 4K projector provided further explanation on the wall. Finally, in Domus IV, visitors marveled at a 15m long by 5.5m high fresco rendered in the smallest details thanks to six side-rigged Digital Projection boxes, blurring the frontiers between the real and the virtual. 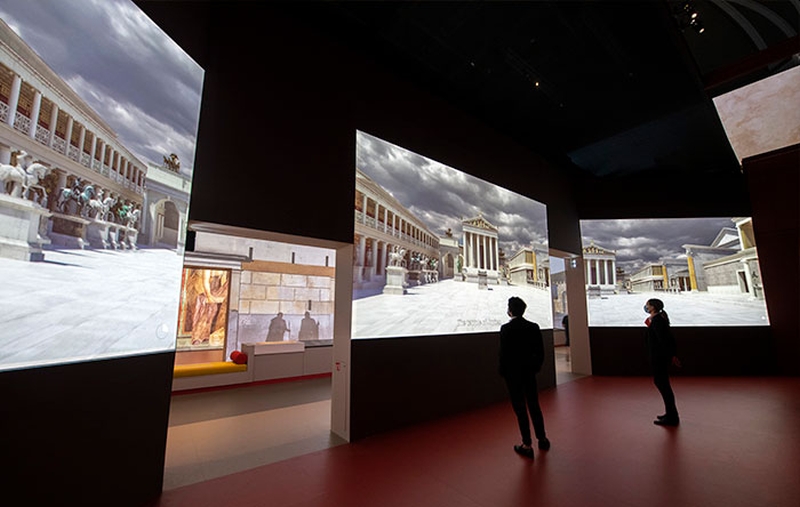 "We had already worked with the E-Vision laser projectors on previous exhibitions, so we knew that the technical characteristics of this product were exactly what we needed," said an ETC Onlyview spokesperson. "We required the 4K resolution, but on top of that, the color renderings and luminosity are perfect for this kind of large-scale image and the multiple choice of optics on this video projector make it adaptable for each projection."

The projectors, during the street section of the exhibition, projected content created by Gedeon Programmes. The images, distributed by an Onlyview media server, depicted life as it was in Pompeii at the time, and were supplemented by the sounds of the city, such as children playing, inhabitants going about their business, and soldiers marching down the street.

As the exhibition cycle went on, the animated scenes of city life slowly faded away as the eruption approaches, replaced by dogs barking and sounds of panic, palpable by the change in atmosphere. The projectors display a wash of grey, smoky cloud that overtakes all images of Pompeii. "After a colossal noise, followed by silence, the light returns and we start again on a cycle of 30 minutes," said MilliÃ¨re.

Installing more than 30 projectors for this colossal project came with its challenges. "Most of the challenges came from video projector inlay for the sets, as there were many inlays to be installed and we didn't want them to interfere with the set design," said Segelle. "We overcame this by communicating with the designers involved and came to a structure that suited both the projectors and the sets." Ultimately, the outcome of all of this hard work was huge success. "Everyone working on this project did everything in their power to bring Pompeii into the modern day effectively," said Segelle. "Digital Projection's assistance was integral throughout the project. The chosen projectors worked perfectly for the work required and they also helped train the ETC Onlyview staff on how to use it."

Amit concludes: "We worked closely with ETC for the choice of the equipment, its deployment as well as the operational side of the exhibition, and we're very satisfied with their work. The quality and performance of the projectors is excellent, and visitors are both impressed and amazed by the immersive dimension of the exhibition made possible by the projectors." 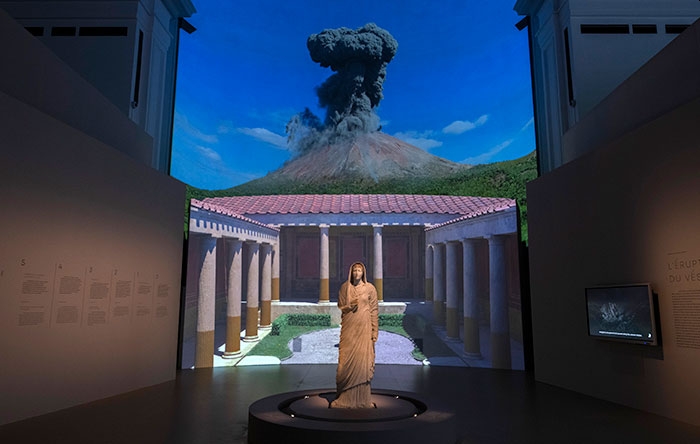