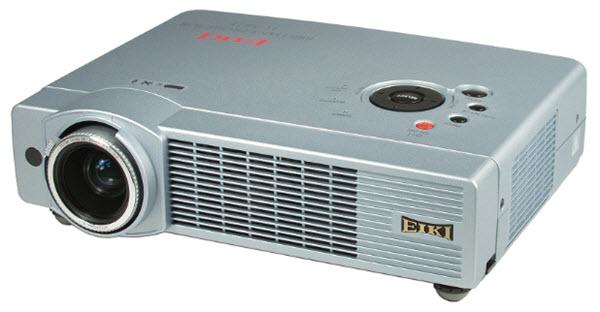 My first thought after connecting the Eiki LC-XD25 multimedia projector to my laptop was that I'd seen this projector before. I hadn't actually, but it reminded me of the no-nonsense presentation projectors from several years ago. The difference is the Eiki LC-XD25 is twice as bright, half the weight and a fraction of the cost of those earlier models and is clearly designed for use in the K-12 classroom.

With an MSRP of $1,295, a street price of $995 and a 3-year warranty, the Eiki LC-XD25 is not the least expensive solution; however, for the feature set it probably has few competitors. The LC-XD25 weighs in at 3.5 lbs and boasts a bright 2500 ANSI lumens, a very critical feature for a classroom projector where typical lighting challenges posed by windows without shades and uncooperative overhead lighting are common. Let's learn more about the LC-XD25.

Lesson 1:  Inputs & Outputs - Aside from specs, there are other distinguishing features worth considering. The LC-XD-25's video inputs include two DB15 connectors that can support two separate computers. Computer 1 DB15 connector will accept input from a computer and an S-video source using the DB15 to S-video adapter cable that is included or component video using an optional DB15 to component video cable.

Computer 2 will accept input from a computer or provide video mirroring for Computer 1. The Eiki LC-XD25 has a shared 3.5mm audio input jack for computer 1 & 2 and L/R audio inputs for composite video. It also includes a 3.5mm variable audio output jack for external speakers or a dedicated sound system.

The Eiki LC-XD25 comes standard with a 3 year warranty and includes the cables mentioned above plus a serial cable (for service), soft carry bag, CD/owner's manual and remote. You'll find the S-video to D-sub adapter cable to be very useful in a classroom where your video source may be up to 75 feet away.

To simulate a classroom environment, I did my testing with the Eiki LC-XD25 connected to a Macintosh, a Windows based PC and a DVD player using a standard matte white screen.

Lesson 2:  Brightness - The Eiki LC-XD25 is a bright 2500 ANSI lumens and it had no problem displaying computer data and video in a well-lit room with every source I tested. With the right image size, its brightness will allow a lights-on classroom for note taking, while retaining the attention of the students.

Lesson 3:  Ease of Set-up - In its native resolution of 1024 x 768 (XGA) the Eiki LC-XD25 presents no setup problems. It provides easy access to the manual zoom and focus functions, and easily switches between 2 computers and a DVD player. It also has a helpful Auto PC button that will automatically fine tune your image when you need to switch between different sources.

Note: The Eiki LC-XD25 can project resolutions up to 1600 x 1200 (UXGA) with video mirroring turned off. In resolutions greater than XGA, image quality is acceptable; however, if you plan on connecting multiple computer inputs, be sure to use the Auto PC feature to fine tune the image.

Lesson 4:  Contrast Ratio - The Eiki LC-XD25's high brightness is dampened a bit by its 400:1 contrast ratio. Images displayed adequately but I could not see subtle color difference between shades of the same color. The limited contrast was more noticeable when I displayed web pages and photos. An instructor considering this projector would need to weigh how critical hyper accurate color rendering is to the goals of the curriculum.

Lesson 5:  Image Size/Throw Distance - The Eiki LC-XD25 comes standard with a short throw lens that will give you a 100" diagonal

image (max zoom) at an 8.9' throw distance. It's almost a 1 to 1 relationship between throw distance and image size. In a K-12 classroom, a short throw lens allows the projector to be positioned in front of the class, allowing the teacher to remain in front of students at all times. Additionally, a short throw setup eliminates the opportunity for students to flash unacceptable hand gestures on the screen.

Lesson 6:  Video - As I expected, the Eiki LC-XD25 performed well with video from a DVD player and cellphone. Wide screen video displayed in letterbox and standard video filled the screen. According to the specs, the LC-XD25 will display HDTV sources up to 1080i. For the best available high-definition connection the optional D-sub 15 to component video cable is an essential add on accessory.

Lesson 7:  Remote Control - I had a minor issue with the LC-XD25 standard remote control primarily because of its non-standard button placement. The "Select" button is left and below the navigation arrows instead of in the middle. Several times, I pressed what I thought was "select" but was in reality the "up" key to browse the menus.

Lessons 8:  Classroom Features - The Eiki LC-XD25 addresses a common projection issue unique to the classroom environment. In the absence of a projection screen, the LC-XD25 can project onto a chalkboard or a painted wall using a feature called blackboard mode. When selected on

the remote control, blackboard mode will detect the color of the display surface and automatically adjust for proper color reproduction. Another feature is Pin code security which, when activated, prevents unauthorized use without the proper Pin code.

Conclusion - The Eiki LC-XD25 is a bright, lightweight, native XGA projector. It easily connects to Mac, PCs and other video sources. It will serve well in a typical K-12 classroom application with or without a screen. Its design is definitely "old school" but its brightness level makes it desirable for school applications. Because of the utilitarian nature of this projector, one of the most attractive features is likely to be its price.

For more detailed specifications and connections, check out our EIKI LC-XD25 projector page.