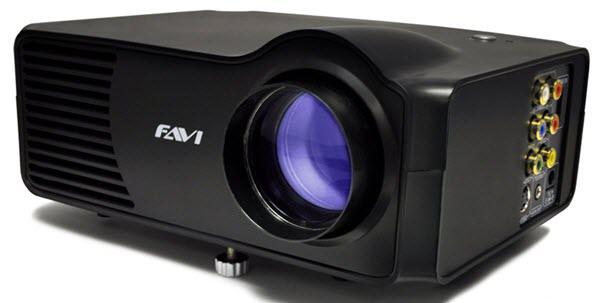 Probably the best description of the FAVI RioHD-LED-3 projector is that it gives you pocket projector performance--with 800x600 resolution and a measured 33 lumens--in a bigger-than-pocket-projector size. Don't assume the size is a problem, though. To the contrary, it's responsible for some notable advantages compared with smaller, lighter competition.

For a start, the case is big enough to mount the connectors on the projector itself, so you don't have to struggle with--or worry about losing--adapter cables with proprietary connectors. It's also big enough for more ports than you might expect, including some, like S-Video and component video with three-RCA connectors, that most pocket projectors don't bother with.

Beyond that, the larger size lets it include speakers that are loud enough to be useful. And instead of a hard-to-control focus thumbwheel, it offers a manual focus control that works like a focus ring on bigger projectors, meaning that it's big enough to get a solid hold on and easy to adjust.

Two other important differences from most pocket projectors are that the LED-3 is built around an LCD rather than a DLP chip, and the chip is paired with white--rather than red, green, and blue--LEDs. The design eliminates any possibility of showing rainbow artifacts.

All this, along with the typical $213 street price, makes the RioHD-LED-3 an inexpensive portable projector that delivers both a touch more than a typical pocket projector and a welcome touch less, in the form of a guaranteed lack of rainbow artifacts.

Fair to good video quality. The 800x600 native resolution for the LED-3 obviously limits the video quality to less than true HD, particularly with wide screen video at 16:9 aspect ratio using only part of the screen. Within those limits, however, the video quality is at least watchable by most peoples' standards. The image with 1080p input from a Blu-ray player, using both Blu-ray discs and upscaled DVDs, was roughly equivalent to what you'd expect from a standard definition TV with a slight color quality issue.

For both DVDs and Blu-ray discs, colors were a little washed out, but more so in Standard and Dynamic modes than Mild, which has the best color. Skin tones were a little on the yellowish side in all modes, but within a range most people would find acceptable.

Potentially more of an issue is digital noise in solid dark areas. The noise can be annoyingly obvious with Standard and Dynamic modes, but is minimal to moderate with the Mild preset. I also saw some posterization and a mild loss of shadow detail. However, both showed only in scenes that are particularly hard to handle well, so that doesn't count as a serious issue either. The lack of rainbow artifacts helps a lot too. Overall, the quality is more than good enough to let you watch a full-length movie comfortably.

Usable sound system. Unlike the vast majority of portable projectors, the LED-3 offers a sound system that's both loud enough and high quality enough to be usable. The two 2-watt speakers offer enough volume for a small room, although you may have to concentrate a bit to hear it if you're more than a few feet away. It's also good enough quality so I could make out every word of dialog in a clip that's impossible to decipher with many projectors.

Portable. Although the LED-3 is far larger than a pocket projector, it's small enough to be portable, at 2.8" by 8.0" by 6.0" (HWD) and just 2.75 pounds plus 14.4 ounces for the power block and cord. Not surprisingly given the low price, FAVI sells the carrying case as a $29 option, rather than supplying it with the projector. But even without the case, the small size makes it easy to store the projector when you're not using it and bring it out to set up when you need it.

Long-life LEDs. As is standard for an LED light source, the LEDs in the LED-3 are meant to last the life of the projector, which keeps the cost of ownership down. FAVI rates them at 20,000 hours, which translates to almost seven years at eight hours per day, every day of the year. Even if they last only half that long, you should be ready to buy a new projector before you need to replace them.

Brightness. I measured the LED-3 at 33 lumens in its brightest mode, an essentially identical 32 lumens in its default Standard mode, and at 30 lumens in its Mild mode, with the best color quality. There is no Eco mode.

The 10% drop from 33 to 30 lumens is enough to see a difference in brightness between the brightest and least bright settings. However, the better color quality in Mild mode is enough to make it the preferred choice for most situations. Fortunately, the drop in brightness between the modes doesn't make a big difference in screen size. At the native 4:3 aspect ratio, and assuming theater dark lighting, 33 lumens is appropriate for a 21" to 29" diagonal image, while 30 lumens is appropriate for a 20" to 28" image. Both modes are bright enough for larger sizes for short sessions, even with moderate ambient light.

Poor brightness uniformity.Unfortunately, the RioHD-LED-3 did a poor job of maintaining uniform brightness across the screen in my tests. I measured the uniformity at only 34%, or almost a 3 to 1 difference between the brightest and darkest areas. The good news is that the biggest drop in brightness is mostly confined to the four corners of the image. That means it doesn't have much affect on widescreen video showing in 16:9 format, which isn't using that part of the display. However, it's obvious enough on 4:3 data screens to be distracting, and extreme enough to make details in the darker areas noticeably harder to make sense of.

Connectivity. The LED-3 offers more ports than you might expect.