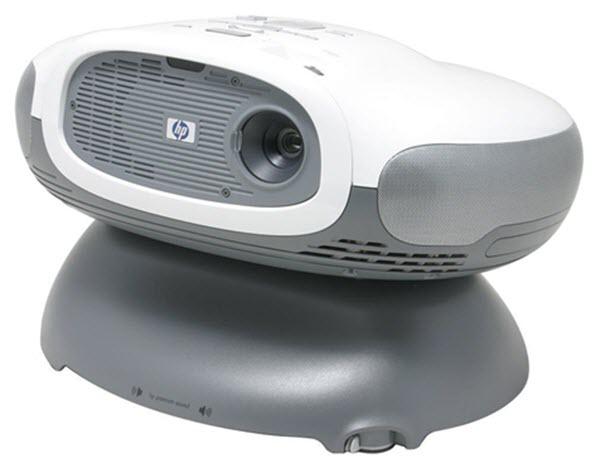 The HP ep9010 is a good projector for someone who wants portable, self contained big screen entertainment. Its a big unit, but portable enough to cart over to a friends place for movie night, or carry outside in the summer time, or hook up to a karaoke machine for a party.Its not super-bright, a pretty dark viewing environment is needed, so its not really much good for daytime viewing (sorry, no superbowl party!) The ep9010 has good audio quality, and good connectivity on the back panel. The remote is simple and effective. The projector has a short throw distance, but even so I expect most of the time this projector will be sitting on a table in between you and the screen. So unless you have a huge room, I'd go with an 80 or 60 inch screen. I chose the 80" Da-Lite Insta-Theater. Its definitely not the right choice for the videophile purist. 800x600 isn't a really great resolution for watching DVDs, you will see scaling artifacts if you know what to look for. Black level and White level were set a little high on my projector, which are easy to reset for a better image. My unit also has about a 15% green push. Most people are not bothered by this. Also, since the projector is likely to be moved around a bit, you should not expect perfectly rectangular images. Its pretty easy to aim the projector, but there's often a small trapezoidal effect. You could adjust the keystone settings, but I'm not sure its worth it if the projector will be moved again after one use.

Any Problems: There are two flaws that I have encountered. First, the fan is too loud! 34db is pretty loud for a unit that you will probably be sitting very close to. You can always hear the fan, and in quiet parts of a movie, the fan can be so loud you can't hear the dialog. Second, the base has sharp plastic edges that will scratch the surface of what ever the projector is sitting on if you try and pick the projector up by the handle. I learned fast to pick it up from the bottom, not with the handle.

Excellent picture quality thanks to internal digital interconnection DVD player - projector: picture is not disturb by conversion to analog (component) and back to digital. Six color wheel is giving rich and juicy picture. Built in sound system 2.1 (2x15W + 30W sub) was possitive surprise for me. Excellent unit for temporary use (party, renting DVD) as well for those, who hate complicated cables around the room.