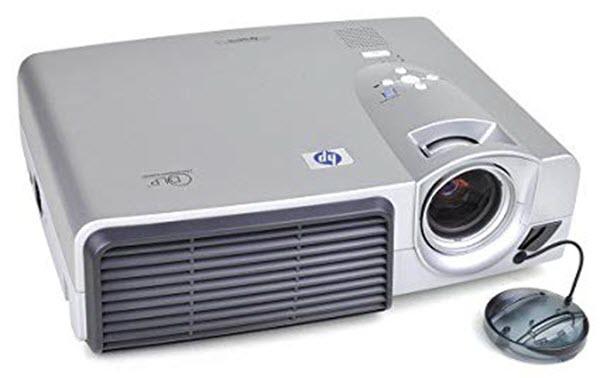 Any Problems: every time on starting need to set the focus due to the lens cover is locked on it

First, this site is excellent so I want to contribute. I bought the HP because it had all the inputs I was looking for and seemed a good choice for a Hybrid (theater and presentations). The quality of the picture exceeded my expectations by far. I have since added a high def box and it is simply AMAZING. I don't notice the rainbow effect as some have mentioned but with poorer signals have noticed the screendoor effect. Bought a flat white pull down screen which helped alot and can't wait to acutally finish the "basement theater seating"

Any Problems: None so far. Documentation was skimpy and only on disc.

I was seconds away from ordering the BenQ equivalent when I saw that the HP projector was made by BenQ. I have been more than satisfied with the HP products that I own and I am sure that they would not put their label on something that is not a quality product. Top that off with a rebate that can't be beat by any competitor that I've found and we've got our winner. HP was offering a rebate that put the price under the price of the BenQ equivalent. Not sure if that is still going on. The BenQ model also does not have the additional input(s) which the HP comparable has two. That was essential to my configuration that includes HD/Component video equipment and composite video equipment so that I do not have to disconnect anything, just a push of a button and I'm good to go. My advice to newbies like myself. Do your homework. Major props to Projector Central for having this 'all in one' website. It has been a tremendous help to me.

Any Problems: Six months (700 hours of viewing) and no problems.

I have had this projector about a month now, and am using it on a Draper 100" high contrast grey screen. I bought it for $900 after the HP rebate, and at that price it is a GREAT projector. I tried several different projectors in the $1,000 to $2,000 price range, and found the color saturation to be excellent (on a par with LCD).I was very concerned about pixelization, but viewed from about 11 feet or more away, there is no noticeable pixelization. Either of its default video settings for cinema or computer graphics are very well balanced. Finally, I hooked it up to my HD cable channels, and thought it performed well given that it is only an SVGA projector and therefore had to downconvert the signal.

Any Problems: Just one minor annoyance. When powering down, it seems that the projector needs to be both placed in to stand by mode and then actually turned off at the power switch. Not a huge problem, but since i have mine ceiling mounted, I have to stand on my sectional to reach the power switch.

If the color wheel issue does not drive you cazy, get your eyes checked. I found the color wheel rainbow to be extremely distracting, and to ignore it you'd have to kid yourself. The effect lasted after looking at the screen for a while , I found that my eyes were seeing rainbows as I walked around after the projector was turned off, it messed with my eyes so much that the rainbows were happening just from walking around the room. If by haps you looked towards the projector, it was painfully rainbowed, just from the gaps in the air slits. The projected image size I was also not impressed by, smaller then some. The color when not to rainbowed was very good, with good black levels, but unless you can not scrape up the mony for a better projector , my recommendation as a former imax projectionist and cinematographer is stay away from this one. I got the panasonic pt-l300, which looks very good for a video projector. I would say from my little knowledege in this area is to stay away from the dlp low end projector. Seems to be the same as the BENQ 6110 but with more connection options

Any Problems: Rainbows in the DLP technology were very problematic for me.

The picture qulity is excellent,colors are natural and life like. the Benq bp6100 has the same picture qulity but just not as bright,Benq bp 7100 has the same picure qulity,the Infocus x1 is not even in the same class,its not as bright and the white balance is off so you will never get natural colors. the Mitsubishi xd 300u as the same picture qulity but brighter{also build by Benq for Mitsubishi} like the picture on the NEC lt240. I have freinds that have the Infocus x1,NEC lt240k and lt260k,Sanyo z1 and z2{not as bright},Benq pb7100,Benq pb6100,Sony vplhs20 and HP vp6112. this HP projector is a great deal for the money - it is build by Benq for HP so you are going to get the same picture qulity. no need to buy the vp6120 since the diffrence in brightness is minimal.The problem with all DLP projectors with the color wheel is that if you bring up brightness or contrast the whites get bright and grainy and wash out detail,the rainbow effect is allways there{if you move your eyes from left to right very fast you will see it}.good luck

Very bright image with good black values and vivid colors. Easy to setup and install, wide choice of possible input sources. Can be set to video mode for more realistic colors or presentation mode for even better contrasts. Excellent value for money at a very attractive price point.

Any Problems: Nothing, besides the DLP-typical, yet somewhat annoying, rainbow effect.

No visible pixalation from 1.5X screen width.Pretty good bright picture with good color and contrast on default settins.Auto selection of input works well.A good basic projector with no extras such as digital zoom . Perfect for someone who wants to view video and not have to tinker with settins.Data projection very sharp and bright.A pretty good projector overall.

Any Problems: The remote control is a mickey mouse credit card type, but worked ok when I could find it.

good Image Quality for A low price, Nice features and very easy to use. I saw the Hitachi cp- x430, and the HP was just as good even better

bed image, i saw the sanyo z1 he have very good image he have ollso 16/9 image the hp is not a good projector dont buy it