Hisense is launching the PX1—a sibling to the PX1-PRO. Similarly geared more toward dark-room theater use than for bright-room viewing, this new ultra-short throw projector uses the same TriChroma laser light source from the PX1-PRO and L9G. It is capable of achieving 107% coverage of the BT.2020 color space and is rated for 2,000 lumens of brightness with a light life of 25,000 hours, vs. the 2,200 lumens offered by the PX1-PRO or 3,000 lumens in the L9G. Both HDR10 and HLG high dynamic range content are supported.

Like the PX1-PRO, the PX1 uses a 0.47-inch DLP chip with XPR pixel-shifting technology to achieve a 4K image. The triple-laser setup eliminates the need for a color wheel and therefore reduces the possibility of rainbow artifacts. As opposed to the screen size range of 90- to 130-inch diagonal for the PX1-PRO, the PX1's range is more limited to between 100 and 120 inches with a 0.25:1 throw ratio, though both projectors feature motorized focus using the remote. The PX1 needs to sit between 12.75 (for a 100-inch diagonal) and 16.75 inches (for a 120-inch diagonal) from the screen. Beyond this, the other key difference between the PX1-PRO and PX1 is that the PX1 does not offer Dolby Vision compatibility, a feature that is expected to roll out to the PX1-PRO this year via a firmware update. 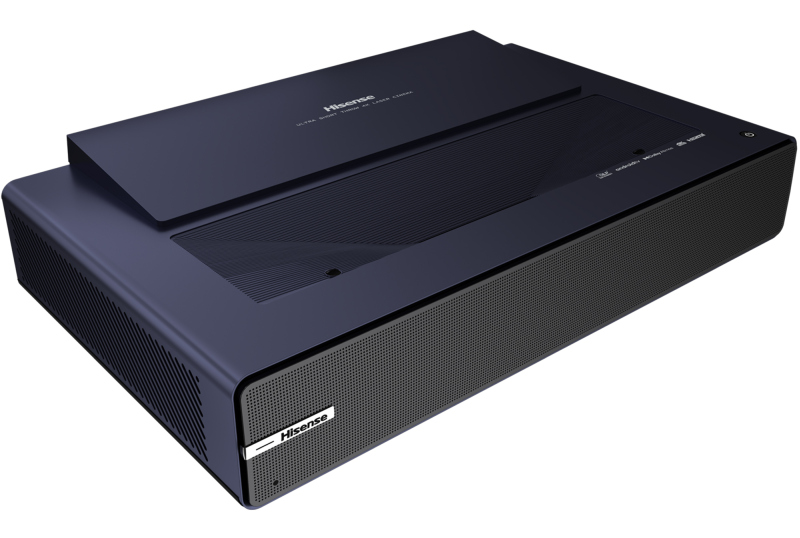 The projector runs on the Android OS platform with Google Assistant and the ability to access streaming apps including Disney+, HBO NOW, Hulu, Prime Video, and more. It will also work with the Amazon Alexa smarthome ecosystem.

There's a 30W speaker system built in to the PX1 that supports Dolby Atmos and Dolby Digital. There are two HDMI 2.1 inputs, one with eARC for passing uncompressed audio up to Dolby TrueHD/Atmos/Dolby quality. The HDMI ports support 4K/120Hz signals, though as with the L9G and PX1-PRO UST projectors, limitations of the DLP chipset result in 4K/120 being scaled to 4K/60 Hz for display. In addition there's an optical digital out, RF cable input, two USB (one 2.0 and one 3.0), Ethernet, and 3.5 mm analog audio out. Wi-Fi connectivity and Bluetooth are also supported. 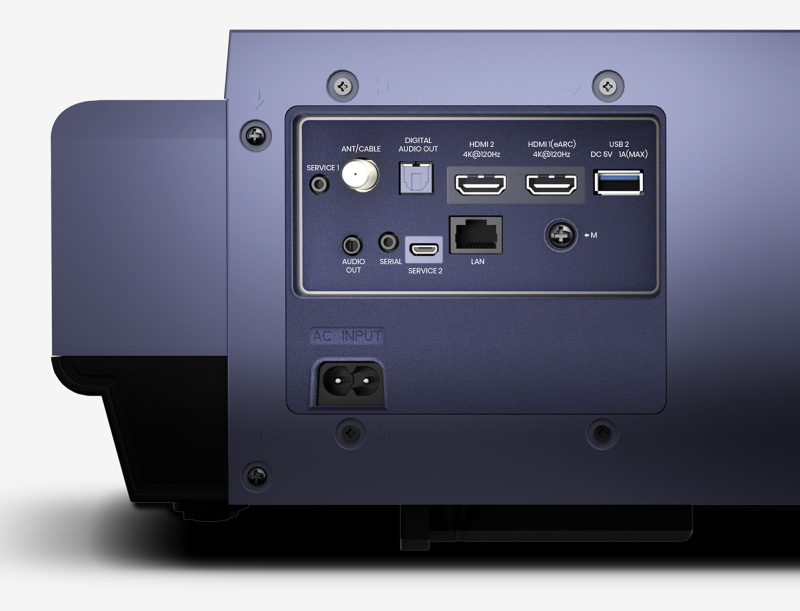 For gamers, the Hisense includes ALLM for automatic switching when a game is detected, and an input lag of around 30 ms.

The PX1 looks nearly identical to the PX1-PRO and shares the same dimensions and weight at 6.3 x 20.5 x 12.8 inches (HWD) and weighs 20.3 pounds. It offers a navy blue chassis instead of slate gray with the PX1-PRO, and a less stylish grille without the circular embellishment found on the earlier model. The projector's MSRP is $3,299, or $200 less than the PX1-PRO.

For more detailed specifications and connections, check out our Hisense PX1 projector page.