Hisense has begun shipping the 100L5F 4K Laser TV UST projection system, a new addition to its Laser TV line that brings the entry point for a Hisense UST system down to an affordable $3,999 with a 100-inch UST ALR screen included.

The new DLP-driven L5 series differs in some notable ways from Hisense's higher end models in the L10 series, the 120L10E ($6,499) and 100L10E ($4,999), which ship with a 120- or 100-inch screen, respectively. The L10 series features a dual-laser projector designed to deliver better color, and comes with an advanced Harman Kardon integrated soundbar with a separate wireless subwoofer. The 100L5F also delivers a rated 2,700 lumens of light vs. 3,000 lumens from the L10 models.

However, the single-laser L5 is no slouch, exceeding 100% Rec.709 color gamut and achieving 83% of DCI-P3 color for HDR content. Nor does it eschew a competent sound system in offering a 30W dual-speaker configuration featuring dbx-tv enhancement technology. dbx-TV is also offered in the L10 series.

The L5 is the first Hisense projector to feature Google's Android TV streaming platform for access to the major streaming services. It offers more than 1,000 Chromecast-compatible apps and features built-in Google Assistant voice/search commands from the projector's microphone remote. 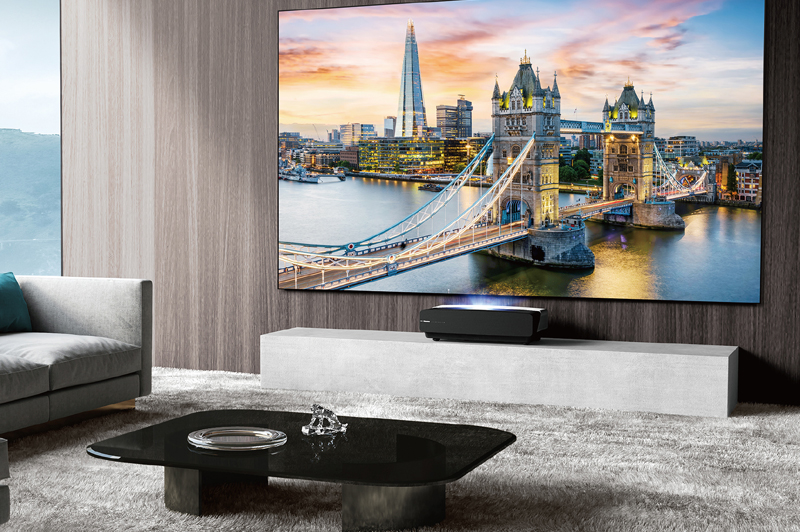 As with most single-laser projectors, the L5 uses a blue laser and yellow phosphor wheel to generate whilte light for the projector's color wheel (of unspecified color sequence). The system is rated for 25,000+ hours of life. The projector is also touted as being certified by TÃV Rheinland for low blue light content.

Connections include four HDMI 2.0 inputs, a pair of USB inputs including one USB 3.0, and an RF antenna input for the projector's built-in off-air tuner.

The Hisense 100L5F is available now from authorized online retailers.

For more detailed specifications and connections, check out our Hisense 100L5F projector page.

Comments (11) Post a Comment
Alphonse Anastasi Posted Sep 20, 2020 12:31 AM PST
Interested. Please send more information. Thanks.
Rob Sabin, Editor Posted Sep 20, 2020 10:52 AM PST
You can find more info on the Hisesne website or at our database page.
Noah Posted Sep 20, 2020 9:04 PM PST
4 grand for a projector that is only 1080p and not even 3000 lumens? The home theater projector industry is so frustrating. Every manufacturer is constantly coming out with new models, but none of them ever include ALL of the 5 essential features that would make them able to compete with televisions.

1. Low imput lag for gaming (under 20 ms) 2. 4k native resolution 3. Short throw (UST is limited to too small of a screen size) 4. Laser with 3000 lumens bare minimum 5. NO RAINBOW EFFECT
Rob Sabin, Editor Posted Sep 21, 2020 7:01 AM PST
Thanks for the comments, Noah. This is a 4K/UHD projector using the usual DLP XPR pixel shifting technology. I think we are well past the point where it's worth arguing about whether these projectors are 4K just because they start with a native 1080p micromirror chip. Most folks who have lived with these DLP projectors, especially after stepping up from a 1080p projector, know that the apparent resolution is, if not quite indistinguishable from a native 4K chip (which only Sony and JVC provide in very expensive premium projectors), an obvious step up. Given that TI has proven it can make native 4K chips but can only sell them for very expensive digital cinema and staging projectors, it's getting to where it's a little disingenuous to think the manufacturers should be able to put out an affordable $1,500 or even $3,000 home theater projector at the moment with native 4K.

That said, this is a UST projector designed for a different application than what you see as the ideal projector, so it's not quite fair to level criticism at it for not being something it wasn't designed to be. But...I do see your point about the industry not "putting it all together" -- at least for this ideal projector/TV competitor you describe. Minus the native 4K (and using DLP XPR instead), it would certainly be possible for the industry to make that projector right now. The Viewsonic LS700-4K we reviewed a while back has specs that almost match that -- a relatively short throw lens, laser with 3300 lumens, 4K DLP chip. It fell short in our testing on input lag (about 60-65 ms), but I've got to believe that a dedicated game mode intended to bypass some processing could solve that. But the bigger issue was that it was really a commercial business projector doubling as a home theater projector, but without sufficient attention paid to achieving decent color and contrast with reasonably high brightness.
Rickenator Posted Sep 22, 2020 6:36 AM PST
Let's address the complaints one by one:

1. Low imput lag for gaming (under 20 ms) - enough of gamers. Write your Congressmen, Senator, the projector manufacturing companies. Complain to them about input lag. For non-gamers, it's not an issue, period.

2. 4k native resolution - please, Louise. Enough of "not native 4K" when pixel shifting works just fine at a price that makes sense. Spend $20K on a native 4K projector if you like.

3. Short throw (UST is limited to too small of a screen size) - most folks can fit a 100" screen in their home, apartment or man cave. There are other projectors like the VAVA 4K that will do 120". If you need a 150" screen, buy your own movie theater.

4. Laser with 3000 lumens bare minimum - since when did this become the minimum standard? With an ALR screen - - plenty bright enough.

5. NO RAINBOW EFFECT - if you don't see it, it isn't there. Inherent to DLP technology - - most people do not have problems with the rainbow effect. No harm, no foul
JAL IRANI Posted Oct 10, 2020 12:33 AM PST
NO COMMENTS. IT'S A MATTER OF EACH INDIVIDUAL'S CHOICE OF APPLICATIONS & HIS BUDGET. SINCE QUITE SOMETIME I'VE BEEN HOVERING AROUND VAVA & LG HU85LA. HU85LA STANDS OUT BETTER. HOWEVER THE PRICE IS STEEP- $5597/- FROM USA & AROUND $ 4600/- FROM SOUTH KOREA. THE FEATURES AND CONNECTIVITY DIFFER SLIGHTLY. WOULD PREFER FROM USA THOUGH B&H NEEDS TO GET IT UPGRADED TO ACCOMMODATE MORE APPS VIZ. YOUTUBE ETC. BOTHE PROJECT UPYO 120" OR EVEN STRETCHED TO 150".
Lester Posted Oct 13, 2020 9:44 AM PST
I like the pixel shifting over the native 4K UST projectors. Reason for this is none of the comparable native 4K UST projectors can also display stereoscopic 3D while many of the pixel shifting ones can. If you don't watch 3D then not an issue, but I like that my projector can handle anything I throw at it. Especially for $4,000 and up.
Alex Posted Oct 21, 2020 1:35 PM PST
I find these UST machines quite interesting considering their price. I'm presuming that the only reason they exist, though, is because it's a cheat to make it a UST? If there are multiple laser engine 4K UST projector's with laser engines at a $3-4k price point, why is there nothing similar in a normal throw with lens memory, etc?
Rob Sabin, Editor Posted Oct 21, 2020 1:38 PM PST
Alex, it's no cheaper to make a UST at this level and in fact it's probably more expensive to develop and build good optics that work well. But I think the focus has been more on using laser's high output potential in building a new living-room TV replacement market than in servicing the classic projector market for home theater. We are actually starting to see some multiple laser products emerging in more classic long-throw designs now, notably the upcoming LG HU810 that was announced recently.
ryan lundahl Posted Nov 30, 2020 12:49 PM PST
I have been looking at projectors on and off for 2+ years and haven't pulled the trigger yet. So far the Epson 5050ube has been at top of my list but this UST, recently on-sale, has me questioning what I should do?

Any expert advise on this decision would be appreciated!!!
Rob Sabin, Editor Posted Dec 1, 2020 7:15 AM PST
Ryan, we haven't seen this Hisense model so can't really comment on it from an image quality standpoint, though I have been looking at Hisense's two-laser step-up model and find it to be a very good projector. That said, these UST models are a completely different animal than the long-throw dark-room theater projectors, of which the Epson is among the best for the money. If you plan on watching mostly in a dark room and are interested in extracting the very best image quality from 4K HDR content, and you don't have any issues with installing a projector on your ceiling or at the back of the room, and you don't mind that the Epson is a lamp-based projector and not laser...then there's no question that the Epson will be your best choice compared to any UST living room projector out there.