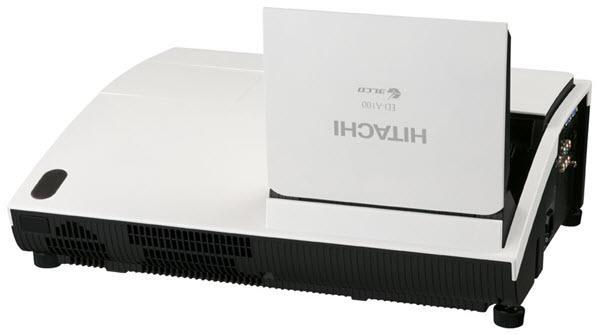 When Hitachi bills their new CP-A200 3,000-lumen LCD projector as "short-throw", they mean it. A unique motor-driven lens/mirror combination puts up a 100" diagonal image with the projector only 16" from the screen . . . this is just about the shortest throw distance we've seen. With native XGA resolution and everything but a digital input, the CP-A200 lets you display large, bright images in the smallest of conference rooms or classrooms. At a street price of just under $1,500, the CP-A200 is slightly more expensive than many of its short-throw competitors, but if space is really at a premium, it may be the only way to get the job done.

Brightness and Uniformity: Unlike many projectors, the CP-A200 exceeds its brightness specification by putting up 3,095 ANSI lumens in Daytime mode. In Normal mode, brightness drops to 2,495 lumens, in Dynamic mode to 2,065 lumens, and in Cinema mode to 1,620 lumens. Whisper (or Eco) mode reduces brightness by 31% across the board, and uniformity is a very respectable 87% . . . a relatively high percentage for a short-throw projector. The top of the image is slightly brighter than the bottom, but the difference is not noticeable.

Inputs: Computer inputs range from VGA to UXGA (1,600 x 1,200), and video signals from 480i to 1080p are accommodated. An auto-search function will select the next active input, or it can be selected directly from the remote control.

Connections: In an unusual move, Hitachi put the connector panel on the right side of the CP-A200, and for cosmetics or for permanent installations, there's a cable cover supplied that can be attached with a single screw. There are two VGA computer input connectors and a separate set of RCA jacks for component video. In addition, you will find inputs for S-video and composite video, a monitor loop-through connector, and both input and output audio mini-jacks. An RS-232 serial port is provided for monitoring and remote projector control, but there is no RJ-45 for Web connection.

Image Size and Position: The CP-A200's maximum of 100" image size does not compare particularly well with its competition whose maximum diagonals can reach the 300" range. That said, for the small rooms where the CP-A200 hits its stride, images over 100" may not be needed anyway. For a 100" image, the centerline of the lens is about 9" below the bottom edge of the image, so tabletop mounting is ideal, and a ceiling mount may work well, too.

Image Quality: The CP-A200's data and video images are comparable to many competitors in its class. Like many LCD projectors, the CP-A200 does not have a particularly high contrast ratio (500:1), so video images are slightly washed out although flesh tones are natural and colors are balanced. Black levels are moderate at best, and some detail in bright scenes is missing. In high ambient light, however, the CP-A200's brightness can compensate for its contrast limitation.

Computer images are sharp, and small text is readable even with maximum keystone correction. Focus is maintained across the screen despite the complex optics needed in short-throw designs.

At standard lamp brightness, fan noise registers 35dB although it is low frequency and directed out the left side of the projector so that most of the audience is unaffected. Whisper mode drops fan noise to the 29dB level with only a modest decrease in image brightness.

Audio Quality: The 7-watt speaker is more than adequate for the small rooms where the CP-A200 will usually be used. Over its full output range, it is buzz- and hiss-free, and for those times when its volume is not adequate, an external amplifier can be connected to the audio out connector.

Security: To complement the monitoring capability of its RS-232 connection, the CP-A200 also sports both a Kensington lock and a locking bar to help ensure that the projector stays where you put it.

Throw Distance: When you are faced with a small room or one where aisles are not available in front of the screen, a short-throw projector is needed to project large images, and the shorter the throw distance, the better. The CP-A200 raises the bar with its throw distance range of 4" to 16" from the screen for 60" to 100" diagonal images, respectively. Hitachi achieves this new standard by using a motor-driven mirror that pivots up from the rear of the CP-A200 and reflects the image from a rear-facing lens assembly.

Image Distortion Correction. Hitachi has a unique adjustment system for correcting distortions of the four sides of the image that may result from convex or concave projection surfaces. It's called Perfect Fit, and it allows you to compensate for pincushion or barrel effects on any or all sides of the image. This is a non-linear correction of arc errors and differs from keystone correction which is a linear (straight-line) function.

On-Screen Menus: You will find the usual complement of menu choices on the CP-A200 spread across a series of eight on-screen menus. The menus are intuitive and easy to navigate, but Hitachi has taken an interesting step by offering what they call the Easy Menu. In one single page menu, they have assembled the most common adjustments from the other menus including brightness and contrast, color temperature, aspect ratio, keystone adjustment, and lamp mode. This is very convenient and avoids the hassle of switching menus to make common adjustments.

Preset modes: There are seven preset modes for the CP-A200 including Daytime, Normal, Cinema, and Dynamic plus three "board" modes: white, black, and green. Cinema mode is effective for producing a film look to video presentations, and Daytime mode does well in overcoming high ambient light washout. Hitachi has done a wise thing in the whiteboard preset by reducing brightness to control glare and eliminate eyestrain from overly reflective surfaces. Four templates are also provided for aligning freehand writing.

My Button: The CP-A200 remote control has a dual function key called My Button. Its two positions can be assigned different frequently used functions. For example, if you regularly change the picture mode or select your custom settings in the User memory, then these selections can be assigned to My Button which eliminates searching menus to find them.

Custom Source Names: In a nice user-friendly move, Hitachi offers the chance to rename the usual "RGB" or "Component Video" input designators to something more personal. It is a treat to see "Bob's Laptop" or "Mary's DVD" pop up when that particular source is selected

No Digital Input: Many projectors in its class offer a digital input to handle DVI and/or HDMI signals from computers or DVD players, but the CP-A200 lacks this capability.

Remote Control: The CP-A200's mid-size remote control is a bit crowded with a total of 30 buttons, but the logical key layout partially compensates. Unfortunately, the navigation buttons are located at the bottom of the remote, and one-handed operation is cumbersome. The silk-screened button names are washed out and with no backlight, it is difficult to make a selection in a darkened room.

Placement Flexibility: The good news of the CP-A200's short throw distance is somewhat offset by that same characteristic. The projector has to be placed between 4" and 16" from the screen to project a focused image, and that may present some problems depending on the layout of the front of the room.

Maintenance: Cleaning air filters is part of the overhead with most LCD projectors, and the CP-A200 is no exception although it is easier than many. The filter housing and the plastic grid side of the filter needs to be vacuumed occasionally to prevent dirt build-up that might interfere with airflow to the projector's interior. However, the filter module need not be washed and dried, it is easy to remove, and it is built to last for about 4,000 hours, so filter and lamp replacement more or less coincide. The lamp is accessed from the top of the projector, so even with a ceiling mount, lamp replacement is relatively easy.

If you have to make presentations in small rooms or even larger ones where you would like to avoid blocking the screen image as you walk about, then a short-throw projector is called for. The Hitachi CP-A200 offers some unusual capabilities with its extremely short throw distance and its proprietary Perfect Fit image adjustment. Its bright images compensate for its relatively low contrast in high ambient light, and while it lacks a digital input, it does allow simultaneous connection of five signal sources with monitor loop through. With a street price of under $1,500, the CP-A200 is priced right if you can take advantage of its unique features.

For more detailed specifications and connections, check out our Hitachi CP-A200 projector page.

Comments (3) Post a Comment
Geoff Stepney Posted Jul 8, 2010 11:19 PM PST
"With a street price of under $1,500" - Yet the two places advertised as places to get the projector from give a price of $2495-2500 ?
Amit Jolly Posted Jul 24, 2010 2:50 AM PST
Can you Pls send me more details of interactive Projectors
Jahid Posted Aug 5, 2011 5:00 PM PST
Hi I'm planing to purchase hitachi CP-A200 short throw projector 3000 lumens for my retail showroom. I'm using a Displax / Prodisplay film on a clear glass to project the video to the street. To be more precise the projector will be placed on the ceiling inside the showroom and it will project on a 100" glass screen with a projection film to show the image/video to the people walking out on the street. IS THIS POSSIBLE ? Please let me know. Thank you