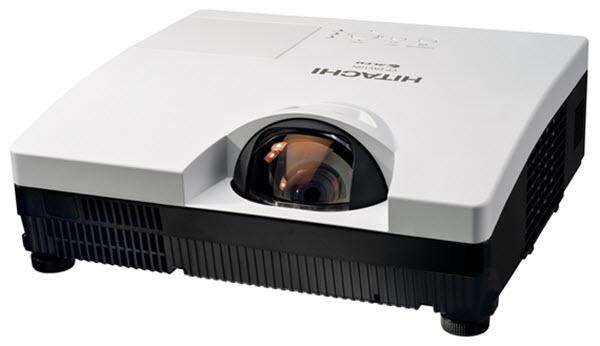 The Hitachi CP-DW10N is a three-chip LCD 1280x800 projector with a feature set that will be most appreciated by students, teachers or the business professional. The short throw capability allows for close interaction with the projected image with a minimal amount of image obstruction. The CP-DW10N's WXGA resolution and above average image sharpness deliver a high impact image in environments with moderate amounts of ambient light. At a street price of less than $1,000, the CP-DW10N includes multiple value-add features that minimize the cost of maintenance including a 4,000-hour eco mode bulb life and a hybrid filter design that only requires maintenance every 4,000 hours. Schools and corporations will also appreciate its impressive suite of built in network capability for remote projector monitoring and control.

Image Sharpness and Resolution: The Hitachi CP-DW10N displays a sharp, finely detailed image. The clarity of the image was impressive considering the inherent challenges in short throw projector optics and the price class of this projector. Hitachi did not cut corners on the CP-DW10N's lens as demonstrated by the pixels that are clearly defined from edge to edge. One side effect of such a sharp image combined with the relatively low fill rate of LCD technology is the screen door effect. Ultimately, I preferred to view the CPDW10N with a slight defocus that helped to minimize the appearance of the screen door but did not detract from overall image quality. Additionally, the 1200x800 native resolution of the CP-DW10N provides an additional 22% of pixels when compared to the more common XGA resolution. On an equivalent sized screen, this additional resolution will help to minimize the screen door effect and will translate to a smooth on screen image.

Brightness: Our test sample of the CP-DW10N measured 1,456 ANSI-lumens in the brightest pre-calibrated 'Presentation' mode. While the measured brightness is only 72% of the 2,000 ANSI-Lumen specifications, this is enough brightness to produce a projected image of 46.6 foot-lamberts using a 100-inch diagonal, unity gain screen at the projector's native aspect ratio. Comparatively, direct view television brightness is usually between 25-35 foot-lamberts, so the CP-DW10N can easily support screen sizes up to 130 inches in diagonal with ambient light in the room, or even larger if screen with positive gain is used or ambient lighting is controlled. Switching to eco mode reduces brightness by approximately 30% resulting in 1,027 ANSI-lumens while extending the bulb life from 3,000 hours in normal mode to 4,000 hours. Brightness uniformity measured at 65%, which is below average for longer throw projectors, but not unusual for short throw units.

Template Function: While many projectors have built in test patterns, the CP-DW10N takes the implementation of 'templates' to the next level. The CP-DW10N has the ability to display a variety of image overlays on a blank screen or any projected image. The built-in templates include two different circle patterns, four different line patterns (from virtual graph paper to 'notebook' style paper) and two different world map formats. While the most obvious use of this feature is in the classroom, I can see this feature being a valuable presentation feature, such as on-the-fly pie chart construction using the included circle patterns. The CP-DW10N also includes the ability to display a custom template via the 'My Screen' function. This option allows the user to save any projected image into the projector's internal memory. This image will be displayed during start-up and can be displayed at any time using the 'blank' button on the remote control.

Short Throw: Short throw projectors have several advantages over their longer throw counterparts. First, they have the ability to support large format screens with only a minimum of available space. Many conference rooms that feature a tabletop projector also feature image sizes that do not entirely fit the screen. A projector with an average 1.8 throw ratio will require over 12 feet of throw distance to fill a 100-inch diagonal screen. The short throw Hitachi CP-DW10N only requires 3.5 feet of throw distance for the same screen size, making a tabletop setup a viable option for a large format image. The CP-DW10N is also a great fit for a ceiling mount installation with the projector positioned close to the screen. The closer the projector is to the screen in a ceiling mount configuration, the less chance there is for the teacher or presenter to physically block the image from the projector to the screen. This allows for an increased level of interaction between the audience, the instructor and the projected image.

Input Options: The CP-DW10N input panel includes dual D-Sub HD-15 connectors for video and computer in, with the second input providing the ability to function as a monitor pass through output. The CP-DW10N has the ability to accept digital video and audio signals over the HDCP capable HDMI connector. Analog video inputs include composite, s-video and component video via the HD-15 connectors. The CP-DW10N provides dual 3.5mm audio input jacks, a third RCA input jack and RCA audio output jacks. Additionally, external control of the projector is available via both RS-232 and the LAN connector.

Network Functions: The CP-DW10N has several networking features. A practical feature for the school with multiple connected classroom projectors, the Messenger function allows text-based messages to be broadcast across all projectors connected to the network. The CP-DW10N contains the ability to bridge command function between the LAN port and the RS232 port, eliminating the need for a secondary control system. This function provides the ability to remotely control any RS232 device, such as a source device or input switch, directly via LAN commands initiated over a web browser. The CP-DW10N can also issue alert emails for specific maintenance or failure conditions to up to five different email addresses.

Contrast Ratio & Video Performance: The CP-DW10N is specified to only a 400:1 contrast ratio, a relatively low value compared to similar projectors in this class. The relevance of this will depend on the primary use of the projector. A low contrast rating is not a limiting factor to image quality when the projector is used in conditions with ambient light. The CP-DW10N is most capable of displaying presentation material including text and static pictures in ambient light. The limited contrast was most apparent when viewing video in a dark room. The CP-DW10N does not excel at video reproduction. Black levels are not very deep, and they could not be adjusted down without crushing shadow detail. Additionally, the CP-DW10N displays relatively noisy video as compared to similar projectors, even when tested with a high quality Blu-Ray source material over the digital input.

Projector Fan Noise: The Hitachi CP-DW10N produces a noticeable amount of cooling fan noise in high lamp mode as compared to other projectors with similar brightness levels. Switching to eco mode reduces fan noise to a point that would be acceptable even in a very quite environment. The audible noise from the projector would likely only be a noteworthy concern if the projector is used in a tabletop setup in a very small room.

The Hitachi CP-DW10N is projector that offers a great value proposition by combining short throw capability, Hitachi's template function, a variety of network command and control functions and great overall image quality and sharpness, with a low street price. While the CP-DW10N's video performance was not overly impressive, it is good enough for non-critical viewing environments. Considering the CP-DW10N's impressive combination of features, this projector would be well suited for conference room use. Additionally, anyone in the market for a short throw projector for the classroom should take a close look at the Hitachi CP-DW10N, as I'm confident that it will excel in that environment.

For more detailed specifications and connections, check out our Hitachi CP-DW10N projector page.