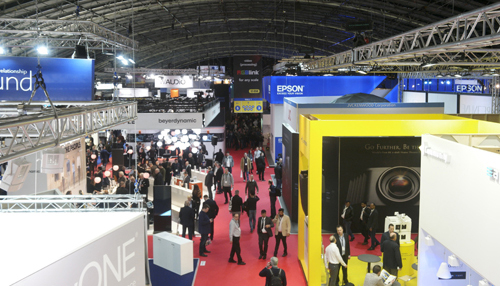 There are plenty of reasons to visit Amsterdam in the winter, but for projection and AV companies none are as compelling as the Integrated Systems Europe (ISE) show. Held from February 4-9 at Amsterdam's RAI Convention Center, this year's ISE was home to dozens of new projector announcements and a wide assortment of AV products and technologies. In addition, ISE continued to establish itself as a premier showcase for artists and companies using projection mapping and edge-blending technologies to blur the lines between reality and science fiction.

Here's a look at the new projectors on the floor this year, shared alphabetically:

Asus: While this Taiwan-based company is more widely known for its affordable flat panel monitors and laptops, it has been selling DLP-based projectors outside the U.S. for several years. At ISE 2019 it showed the LED Projector F1, a compact, 1080p model with an estimated street price of $899 (U.S.) and late spring availability. The projector utilizes a .47-inch DLP chipset at its native resolution paired with a long-life RGB LED light source (rated for up to 30,000 hours) that helps it achieve 1200 ANSI lumens, 3,500:1 rated contrast, and 100% of the NTSC color gamut. According to Asus, the fixed 0.8 throw ratio lens can fill a 25-inch screen at .43 meters (1.4 feet), and up to a 210-inch image at 3.7 meters (12.1 feet). Other stand out features include WiFi connectivity (with support for Android and Windows 10 devices) and built-in 3-watt Harmon Kardon speakers with an 8-watt subwoofer. While those speakers might not impress home theater enthusiasts, they let you watch movies or listen to music with the F1 anywhere you can find power. 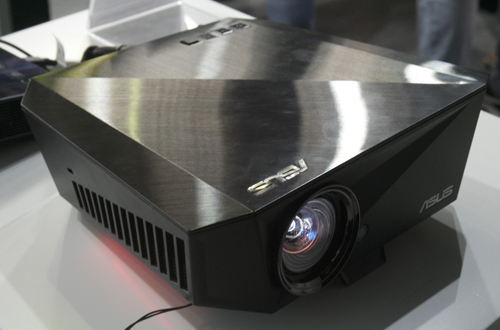 Barco: In just three years, laser light sources have nearly replaced all bulb-based light sources in event and venue projectors, due, no doubt, to the long-life expectancy, increasingly higher brightness, and wider color gamuts enabled by laser engines. At ISE 2019 Barco introduced a total of 10 projectors to its laser-based G-, F- and UDX series and showcased three of the brightest versions for each of these series at the booth: the G60, F90, and UDX 4K40. All three use DLP technology and accept a variety of interchangeable lenses, including the UST G lens (0.36:1) shown mounted below on the G60-W10, a 1-chip model using a laser-phosphor engine to output up to 10,000 ANSI lumens. For more details and technical info on these models, check out ProjectorCentral's new product coverage.


BenQ: As ProjectorCentral reported earlier in a New Product Announcement, just before the ISE show Benq introduced two new and exciting home theater projectors, the Cinepro HT9060 and Cinepro HT8060. Although neither of these new models were on display at ISE, ISE veterans may recall seeing a prototype of the HT9060 using the ColorSpark HLD LED light source two years ago at the 2017 show. Among this year's booth highlights were two of Benq's popular LU9915 WUXGA models paired with UST lenses, demonstrating how both could be sub-floor mounted to to provide a wide and colorful display using edge-blending techniques (see photos.) 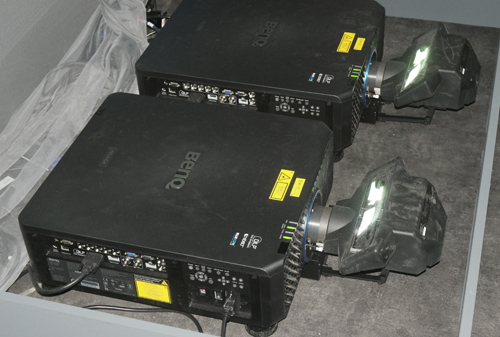 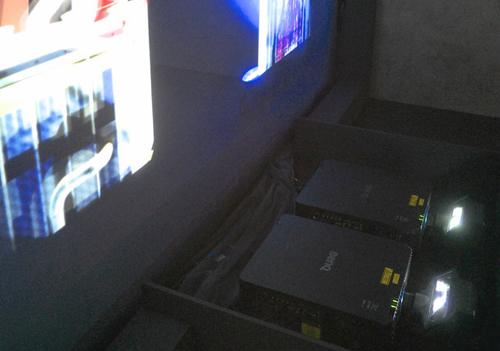 Canon: Canon added four new laser projectors to its lineup of home theater and installation-projector models at ISE. Surprisingly, two of them were LCOS based and two were DLP based. (Until now, nearly all of Canon's top-of-the-line models were LCOS.) The XEED LK-6020Z (6,600 lumens, 4,000:1 native contrast) and XEED LK-5020Z (5,000 lumen, 3,600:1 native contrast) each deliver native 4K UHD resolution (3840 x 2160) from three LCOS chips illuminated by a blue laser and yellow phosphor wheel light engine with an estimated 20,000 hour life span. Both also feature Canon's AISYS (Aspectual Illumination System) technology that helps improve contrast and brightness while reducing the size and power requirements of the projectors. These models can be paired with Canon's new 1.76X RS-SL07RST 4K zoom lens which, as demonstrated by Canon, allows for detailed projection on spherical screens and also features an incredible vertical lens shift of +/-73% (as well as horizontal +/-11%).

On the DLP side, the LX-4K3500Z boasts 35,000 ANSI lumens, 30,000:1 dynamic contrast, and native 4K resolution. It uses 3 x 1.38-inch DLP chips illuminated by blue and red lasers plus a green phosphor wheel to achieve 100% of the DCI-P3 color gamut, and can be paired with seven interchangeable lenses. Canon's geometric correction tool is also included along with a DICOM simulation mode.

The compact and more affordable 1-chip LX-MH502Z features 4K UHD resolution and a single laser-plus-phosphor wheel light source able to deliver up to 5,000 ANSI lumens at a native 50,000:1 contrast ratio. It also features a 1.6X zoom with an impressive lens shift range of vertical +/-60% and horizontal +/-23%, well beyond most other 1-chip 4K UHD projectors in its class. Connectivity options include two HDMI ports plus HDBaseT and RJ-45 Network ports.


Casio: Debuted its new Superior Series line containing four projector model variations aimed at the education market. All of these sport 4,000 ANSI lumens brightness provided by Casio's laser and LED hybrid light engine, with Quick Start (5 secs to full output) and up to 20,000 hour life span span. The XJ-S400U and XJ-S400UN models feature WUXGA (1900 x 1200 pixel) resolution while the XJ-S400W and XJ-S400WN feature WXGA (1280 x 800) resolution. The UN and WN models have built in wireless features that enable 1-Click Connection, custom templates and a "Control From Anywhere" feature that lets any computer on the same network access the projector. A moderator function also allows for multiple windows to exist on screen showing output from connected devices, enabling several students or collaborators to share the screen.


DPI: The hottest item in the DPI booth was its new WUXGA-resolution M-VIsion Laser 21000-WU. This 1-chip DLP projector achieves an industry-leading (for a 1-chip DLP) 21,000 ANSI lumens brightness and 18,000:1 dynamic contrast ratio using a blue + red laser + yellow phosphor engine in combination with a specially designed color wheel. According to DPI, the new ColorBoost+Direct Red laser light engine helps the projector achieve high color accuracy and the full Rec.709 color gamut as well as long 20,000 hour life span. Sealed optics (up to the lens) and a liquid cooling system also allow this projector to be used in dusty environments with minimum maintenance and no filter replacement. 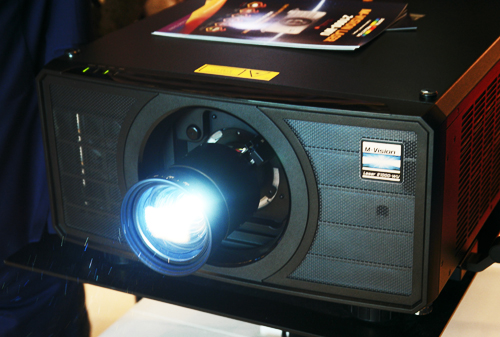 Epson: Epson demonstrated at ISE a wide array of new laser projectors in its Pro L Series, including the top-of-the-line 30,000 lumen EB-L3000U. (For a detailed description of these and other models, see ProjectorCentral's New Product Announcement.) 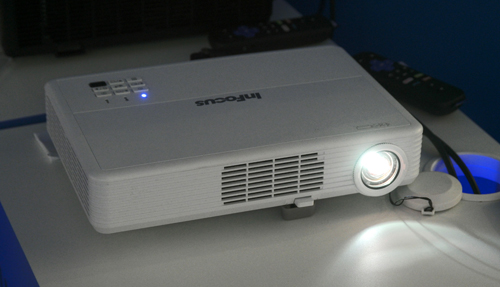 JVC: JVC announced tentative specs for its upcoming true 8K Native resolution (7680 x 4320 pixel) DLA-VS8000 projector powered by a laser phosphor engine. This new model will have the same form factor as the DLS-VS4810 8K projector that uses e-Shift pixel-shifting to attain that resolution, but it will feature 5,000 ANSI lumens and 10,000:1 native contrast. Estimated to ship late 2019.

Optoma: Optoma's most recently announced models, the ZU506T and ZU610T laser projectors were not on display at Optoma's ISE booth (see ProjectorCentral's coverage here). The company did show a range of existing business and home models, as well as some pending introductions first debuted at CES, including its UST projector with integrated soundbar, which was shown in Amsterdam as the UHZ6SUST Smart 4K Laser Cinema. 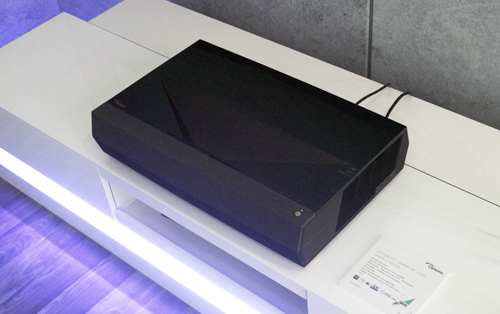 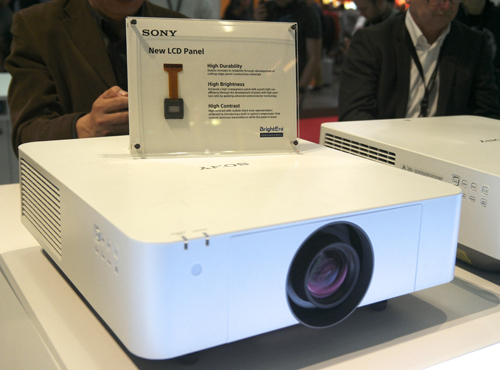 Viewsonic: Viewsonic didn't display any projectors at ISE that weren't previously known, but the company did feature some products previewed last month at CES, one highlight being their pending all-in-one Z1000-4K UST/soundbar combination. Various existing business and home theater projectors were on display as well. 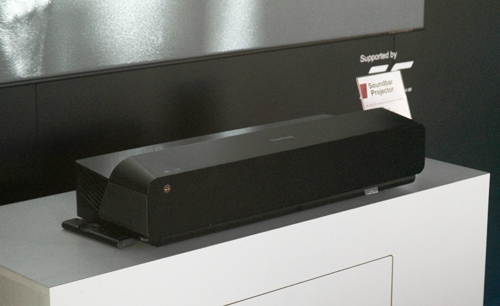 Vivitek-Delta: One of the more interesting projectors at ISE targeting classrooms and collaborative environments was Vivitek's new NovoProjector D3600Z. This laser-based, 1080p DLP model features 4,000 ANSI lumens, a 20,000 hour life span for the light source, and a 1.4X manual zoom lens with keystone correction and modest lens shift. It also features a built-in speaker, a DICOM SIM mode, and Vivitek's wireless NovoConnect Solution which enables 1-click connect to the projector from any computer running the NovoConnect App on the network. 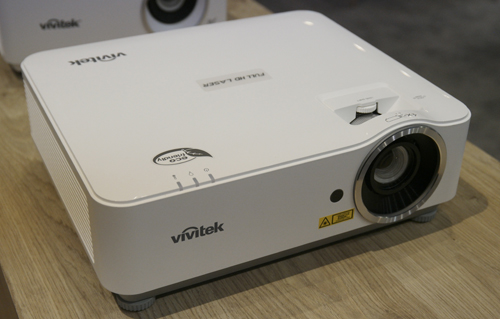 Comments (1) Post a Comment
Lauren Anderson Posted Feb 19, 2019 5:00 PM PST
Excellent summary of ISE 2019. These are the kinds of articles that keep projector enthusiasts like me excited about the technology.