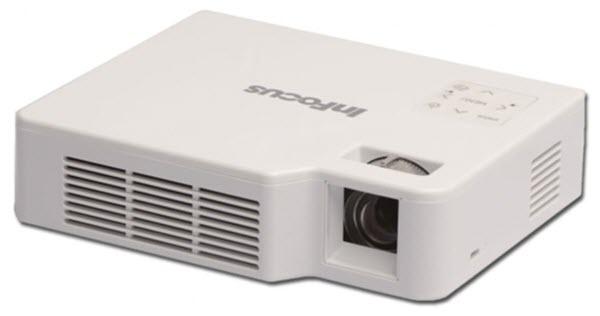 LED illumination systems are becoming more common, but most fall into the 300-lumen and less range for portable projectors. Recently, one manufacturer (LG) boosted output from its small LED projectors to 500 lumens, and InFocus has followed suit with their new IN1144. Street priced at $580, the IN1144 is a WXGA mobile presentation projector weighing just under two pounds (the power supply brick adds an additional pound) with computer and video inputs including HDMI. It also has a USB port, and it sports a 2-watt mono speaker. All in all, it is a nice package and handles moderate ambient light environments well, but its size and weight do not compare particularly well with its competition.

Cramming a lot of optics and electronics into a small package is an art, and manufacturers are getting better at the task every day. However, InFocus is a bit late to the party with the IN1144 which has nearly twice the volume and weight of its nearest competitors. That said, the IN1144 can throw a 7% larger image than its competitors from the same projection distance, but most mobile presenters would probably prefer a smaller, lighter projector over a slightly larger image.

To its credit, the IN1144 has good video image quality. Like most inexpensive LED projectors, there is a slight background color shift in data mode with large white areas (reddish on the lower left and greenish on the right side of the image), but this is undetectable in video mode. In fact, flesh tones are rendered nicely in the Movie preset, and there is a film-like quality to video presentations.

The IN1144 sets up easily right out of the box. Connections are clearly labeled, and with its LED illumination, there is no warm up period. The throw ratio is a healthy1.4:1, and you can put up a 60" image from just six feet away. The front feet of the projector can adjust projection angle so you can incline it to get the image where you want it. There is an auto or manual keystone correction of Â±40Â° that compensates for such angling.

Data images are artifact-free and well saturated, but soft focus is an issue. Letters and numbers have a slight greenish hue surrounding them, and the resulting blur makes for difficult viewing of small text. Varying the sharpness setting had minimal effect on character edge definition. In contrast, the video performance is excellent and probably enhanced by the soft focus. A contrast ratio of 10,000:1 makes for good shadow definition and highlight rendering, and colors are well balanced. A slight increase in contrast and decrease in brightness really gave video images a lifelike appearance.

There are several choices for input to the IN1144. In addition to a VGA port for PCs and Macs, there is an HDMI connector, a 3.5mm jack for composite video, a USB Type A connector, and a slot for an SD card. The E-Z menu that is displayed is used for navigating through the USB and SD content while the more familiar on screen menu presents all the adjustments for the video and computer material. Besides a direct connection, you can purchase an extra cost Wi-Fi dongle and wirelessly project from your PC (but not Mac), or you can go computer-free and use properly formatted thumb drives and SD cards containing data, video, or audio files.

On the flip side, the operator manual is resident on the projector and must be downloaded to your computer via a USB connection. This procedure is relatively easy to complete if you have a USB cable handy, but otherwise, you have to scroll rather slowly through the manual using up/down keys on the control panel or the remote.

Presets. The IN1144 has four preset modes (Brightest, PC, Movie, and Picture) which make adjustments to brightness, contrast, color temperature, and other parameters for their specific applications. Brightest mode exhibits a not uncommon emphasis on green which is typical of the brightest setting in any projector. Color adjustments (saturation and tint) can only be made when displaying composite or component video, but fortunately there is no need to vary the color settings for other inputs. If you want to save your specific settings for brightness, contrast, and color temperature, there is one User mode that will store your choices.

Connectivity. The inputs include one HDMI port, one VGA for computer or component video, and one composite jack which doubles as an audio input. There is also a USB Type A connector for computer USB cables and thumb drives as well as an SD card slot.

LED Life. The LEDs in the IN1144 have a rated life of 30,000 hours, so it should be long retired when the LEDs wink out. However, if you do have an LED failure, the projector must be returned to an authorized service center for repair as LEDs cannot be user-replaced like a lamp.

Maintenance. Like most DLP projectors, the IN1144 has no air filter to change, so maintenance consists of vacuuming the side grills every now and then to avoid any dust accumulation that might impede airflow. Since it employs LEDs, there is no lamp to replace.

Warranty. The IN1144's warranty is one year.

Brightness and Uniformity. Our test unit fell short of its brightness rating of 500 lumens. In Brightest mode, it delivered 405 lumens. The other preset modes tallied the following brightness readings: PC mode - 330 lumens, Movie mode - 305 lumens, and Picture mode - 275 lumens. We usually note the brightness decrease for Eco mode, but with LED illumination, there is no need for an Eco mode. Brightness uniformity was 81% with the upper central portion of the image slightly brighter than its surroundings.

Fan Noise . Since you usually sit close to a small projector, fan noise can be a distraction. In the case of the IN1144, this limitation is avoided using LEDs for illumination and by putting the power supply in an external brick which cables to the projector. Since little heat must be evacuated from the chassis, noise level is quite low. However, if you operate at high altitude and need to change the fan to that mode, the noise is much louder and definitely distracting.

Speaker Volume At two watts, the IN1144's mono speaker is not going to fill a room with sound, but for small gatherings it is more than adequate. Volume was easily varied from the control panel or the remote, and it was rattle- and buzz-free over its entire range.

Image Size and Offset For a 60" diagonal image, the centerline of the lens is about 3" below the bottom of the image, so tabletop mounting works well. A 60" image is bright enough for a darkened room, but if ambient light is a problem, then keeping the image under 45" would be a good idea to avoid image washout.

Menu Selection and Navigation. There are two on-screen menus for the IN1144 . . . one for the usual picture and computer settings and the other, called the EZ Suite by InFocus, for connections via USB and SD card. Both menus are intuitive and easy to navigate, and layering is minimal.

Placement Flexibility. Like many small, inexpensive projectors, the IN1144 lacks a zoom lens, so placement can be an issue. The image size is fixed for each projection distance, so if you want a larger or smaller image, you will have to re-position the projector.

Focus. The IN1144's focus is soft which actually improves its video look but does detract from its data performance. As noted earlier, the soft focus gives a video image a film-like feel that is attractive.

Rainbow Artifacts . Even though its LED illumination design eliminates the need for a color wheel, the IN1144 is still subject to the rainbow artifacts of most DLP projectors. With newer high speed LEDs, this phenomenon is less pronounced, but those who are sensitive to these occasional bursts of RGB color may still observe them in high contrast video motion scenes.

Remote Control The IN1144's remote control is small and functional, but that means good news and bad. The good news is that there are several direct selection buttons (input, aspect ratio, etc.) that are clearly labeled, and the buttons have a slight upward bulge that makes them easy to locate in a darkened room. However, at the size of a credit card, the remote can easily wander away in someone's shirt pocket. An added inconvenience is that it is necessary to make a trip to the store to buy a CR2025 battery in order to use the remote. As with several recent InFocus projectors, no battery is shipped with the remote.

The InFocus IN1144 is a solid performer when it comes to video presentations, but it falls short in the data category. Its soft focus gives a seamless, analog quality to video viewing, but it makes viewing small fonts in spreadsheets and documents difficult. It is small and light for a 500-lumen projector, but it has competitors nearly half its weight and size at a comparable street price. This is InFocus' first small LED projector and one of a very few in its brightness range. Owners will certainly benefit from the 30,000 hour LED light source, and thus no need to ever buy a new lamp.

For more detailed specifications and connections, check out our InFocus IN1144 projector page.