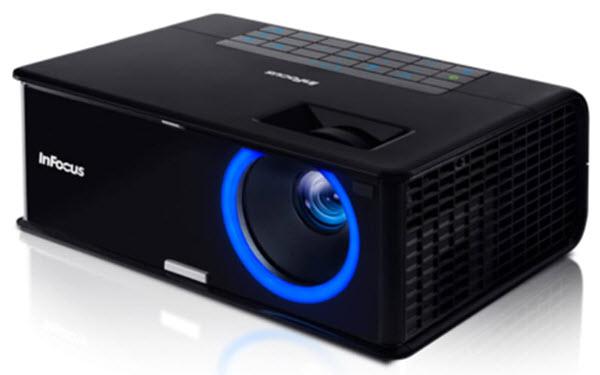 InFocus IN2116 Classroom and Conference Projector

InFocus has expanded its line of DLP projectors with the introduction of its $1,099 IN2116. At 3,000 lumens and 7 pounds, it is well suited for use in conference rooms and classrooms with normal ambient light. There are two other models in this new series (the VGA IN2112 and the XGA IN2114), but the IN2116 stands apart with a native resolution of 1280 x 800. With added features like 3-D compatibility and selectable color wheel speeds, the IN2116 represents a significant advancement in projector performance.

Brightness and Uniformity: Our test unit put 2,610 ANSI lumens on the screen in the Bright preset mode with BrilliantColor on. This is a little shy of its 3000-lumen rating, but plenty bright for its intended usage. Uniformity was measured at 83% with the bottom portion of the image a little brighter than the top. Presentation and Video modes delivered 1,235 and 1,140 lumens, respectively while Eco mode reduced brightness by a little more than 20%. The 1.2:1 zoom lens at full telephoto only dropped brightness by 9%, so you're not giving up much picture brightness if you have to use the telephoto setting to adjust image size.

Image Size and Position: With a 100" diagonal image on the screen, the centerline of the lens is 6" below the bottom of the image, so you probably will not have to employ much of the available Â±30Â° keystone correction to position an image of appropriate height for a moderate-size room. The projector can be elevated by dropping and locking the single front foot, and if horizontal leveling is needed, the right rear foot can be adjusted. However, projector positioning flexibility is a bit limited by the 1.2:1 zoom capability.

Connections: The IN2116 has two VGA input connectors for data images and three for video sources (composite video, s-video, and component video via one of the VGA connectors). There is also a USB LitePort for memory sticks with picture files which are displayed in a slide show format. Powerpoint presentations saved in a JPEG format can be displayed via the LitePort without the need for a computer connection. Two audio input mini-jacks are complemented by a single audio output should external amplification be needed.

There is an RJ-45 connector for network connection, and a D-sub 9-pin connector is provided for remote sensing and control, and for added security, a Kensington lock assembly is built in.

Preset modes: Preset modes include three selections that change color emphasis to compensate for non-standard projection surfaces such as whiteboards, blackboards, and painted walls, and there are three others titled Bright, Presentation, and Video that each has their own color and brightness levels. A User mode allows you to store your preferred image modifications if one of the Presets does not fit your needs.

Image Quality: The IN2116 delivers top-notch data and video image quality. PC images have saturated colors that are well balanced, and the Bright preset boosts brightness to reduce ambient light effects with only a modest impact on contrast. Text and graphics are detailed, and even with full keystone correction of Â±30Â°, 8-pt. type is still readable. InFocus has always selected good optics for their projectors, and the IN2116 is no exception. Images are sharply focused from edge-to-edge and in the corners as well. Non-native aspect ratio images are seamlessly scaled and show minimal fuzziness.

DLP light engines often have high dynamic range in a given scene, regardless of the official contrast ratio. This is the case with the IN2116. Accordingly, video images have vivid colors, and shadow detail is preserved. The Video preset mode may be too bright for movie viewing in a dark room, so you may want to use Eco lamp mode to drop the image brightness. Be aware that the IN2116's native aspect ratio (16:10) will produce slim black bands at the top and bottom of the 16:9 format movie images.

The IN2116's Video Preset does an excellent job setting saturation, hue, contrast, and brightness. You can connect your DVD player and start your movie without changing a setting . . . even hard-to-render skin tones are right on the mark. If you feel the need for an adjustment, there is an effective Flesh Tone Correction setting in the Advanced Picture menu. Note that saturation and hue adjustments in a Preset can only be made when connecting composite, s-video, and component video sources. However, you can always go to the Advanced Picture menu to adjust individual RGB levels if the need arises.

Selectable Color Wheel Speed: As with almost all business class DLP projectors, the standard color wheel speed on the IN2116 is 2x. However, on this model, InFocus has given the user the ability to increase the wheel speed to 3x, thereby reducing the frequency of rainbow artifacts for those sensitive to them. While the rainbow artifacts may disappear for some viewers, there is a marked increase in color wheel noise that may or may not be distracting depending on the situation. Still, if you are rainbow sensitive, this may be an attractive option.

At 32dB in normal lamp mode, the IN2116 fan noise is quieter than most in its class. But like many color wheel DLP projectors, it has a mid-frequency noise component that might be noticeable in a small room. Using Eco lamp mode will reduce fan noise with only a small decrease in brightness.

3-D Compatibility: Most new business-class DLP projectors offer 3-D compatibility with TI's DLP Link protocol, but the IN2116 takes it one step further. It can interface with NVIDIA's IR link included on their 3-D capable video cards. This is a recent addition and isn't detailed in the initial IN2116 User Guide, but it will be in upcoming editions.

Audio Quality: Two 5-watt speakers located at the rear and on the left side of the projector provide all the sound needed for a moderate-size room. There is no hiss, buzz, or break-up even at full volume.

Maintenance: Like most DLP projectors, the IN2116 has no air filter to change, so maintenance consists of vacuuming the side grills every now and then to avoid any dust accumulation that might impede airflow. Replacing the lamp is still required, of course, but since it is removed through the top of the projector, it is relatively easy to do even if the projector is ceiling-mounted.

On-Screen Menus: The on-screen menus are laid out logically, but there is a fair amount of layering. The Basic Picture menu has 12 different settings, the Advanced Picture menu has 24, and the Setup menu offers another 37 choices. Of course, most of these are one-time selections, and the menus are easy to navigate with the remote control. While navigating the menus is straightforward, remembering where a particular setting is located can be a bother unless you're using the projector regularly.

Warranty Provisions: A quick read of InFocus' promotional material gives the impression that the projector warranty is for five years, but that is only partially true. There are certain components that are only warranted for two years, and they include the power supply, fans, color wheel, and light tunnel. These items tend to be more likely to fail than buttons or lenses, so just be aware that the heart of the warranty on the IN2116 is closer to two years than five.

No Digital Input: Unlike many of the competitors it its class, the IN2116 lacks a digital input so you won't be able to connect DVI and/or HDMI signals you may have on your computers or DVD players.

Projector Control Panel: Like some of its predecessors, the IN2116 employs touch-sensitive function buttons across the top of its case. Touch sensitivity makes it possible to inadvertently make an unplanned function selection. Using the remote control solves this potential annoyance, but it has its own button idiosyncrasy.

Remote Control: The mid-size remote control has 17 buttons that are clustered logically with readily recognizable icons, and after using a remote for a while, you get to know where certain buttons are located by feel. That will not be the case with the IN2116's remote because its buttons are flush. So, you will have to look at the buttons to select the function you are after. The button icons are easy to recognize, but in a darkened room, button selection can be tricky.

The InFocus IN2116 is tough to top when it comes to putting up bright, high quality data and video images. Classroom and conference room presenters will appreciate the extra display capacity of its 1280 x 800 native mode. On-screen menus may cause some occasional head scratching, but that is a small price to pay for the high quality images it projects. For its outstanding image quality, the IN2116 deservedly gets our highest 5-star rating for Performance.

For more detailed specifications and connections, check out our InFocus IN2116 projector page.

I ask you a question, InFocus IN2114 has the option to view videos by simply connecting the USB? ... or can slides be seen only when you connect the USB?