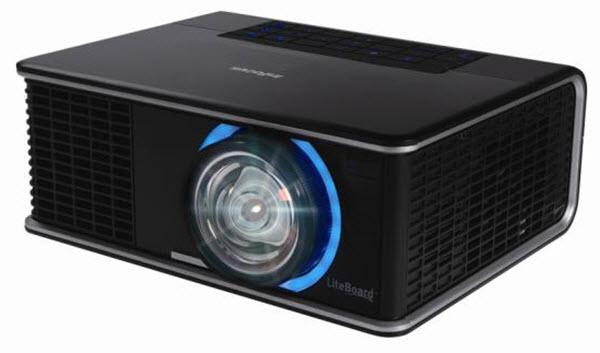 InFocus was one of the first companies to offer interactive projectors. Today, while others are introducing their first models, InFocus is already selling its second generation, including the current high end InFocus IN3916 Widescreen Interactive Projector. Built around a DLP chip, the IN3916 offers WXGA (1280 x 800) resolution as its native format.

Among the IN3916's notable touches is the combination of a short throw with the ability to use the interactive wand without touching the screen. Taken together, the two features minimize the chances of accidentally getting between the projector and screen to cast shadows. Even better, because it doesn't need calibration, the IN3916 is a good fit if you need a projector you can move from room to room. We measured it at somewhat less than its 2700-lumen rating, but it's easily bright enough for a typical classroom or conference room and a good choice for either, at $1425, with an educational discount also available.

It's interactive. The primary advantage for any interactive projector is the interactivity. If you don't need the feature, you can get equivalent projectors without it for less. However, having it built into the projector saves money over buying a separate interactive whiteboard. As you might expect, the IN3916 comes with an interactive pen, or wand, that you can use as a tool both as a mouse and for tasks like drawing or annotating existing documents. The wand even includes a scroll wheel, along with left and right buttons for mouse clicks.

No calibration. The IN3916's interactive technology was developed by TI. It takes advantage of the projector superimposing a grid on the image. The grid is invisible to the human eye. However, the wand can see it, so it can tell the projector where it's pointing.

Eliminating the need for calibration doesn't matter much for a permanently installed projector that you would otherwise calibrate only once. For one that gets moved around on a regular basis, however, it's a major convenience that will save you a few minutes every time you set it up.

No need to touch the screen. In addition to eliminating the need for calibration, using a wand that only needs to point to the screen has two other benefits. First, you can use any surface, including a screen that's suspended from the top, without a solid backing behind it. Second, you can stand to one side of the screen and interact with something on the other side, or stand several feet in front of the screen. Either choice helps avoid casting shadows.

In a classroom, not having to touch the screen can also free you to stand by a student's desk or in the back of the room. In our tests, the wand worked from about 30 feet away. However, unless you have a surgeon's steady hand, don't expect to do anything that requires fine control from more than a few feet. The further the distance, the harder it is to control movement on the screen. I found that trying to click from a distance usually was enough to move the pointer off whatever I was trying to click on.

Good data image quality. The image quality for data screens is easily good enough for almost any business or educational application. Green and yellow were a little dull in our tests, but yellow was truly yellow rather than mustard colored, and colors in general were suitably eye catching, even though they were a little short of vibrant.

Similarly, text was easily readable at sizes smaller than you're ever likely to use, with black text on white crisp and easily readable even at the smallest sizes we test with. White text on black was slightly less readable at small sizes, but it's also less common. The projector settings needed manual adjustment to eliminate pixel jitter from images that tend to bring out the problem, but even without the adjustment, jitter wasn't a serious issue.

The IN3916 even did reasonably well on brightness uniformity, which is often a problem for short throw projectors. We measured the uniformity at 67%, and could see brighter areas on solid white and solid black screens. However, adding almost any text or graphics to the screen broke up the image enough to make the lack of uniformity impossible to see.

Appropriately bright for a small- to mid-size room. Our test sample almost matched its 2700 lumen rating, but only with interactive mode turned off. We measured it in its brightest mode at 2539 lumens, or about 94% of its rating. With the interactive mode on, the brightest mode dropped to 2029 lumens. That's roughly 75% of the rating, but still bright enough for a small to mid-size conference room or classroom with typical ambient light.

With the interactive feature on, the presets ranged as low as 1072 lumens, which is still bright enough for a reasonably large image with low ambient light. Switching to eco mode drops the brightness by roughly 20 percent.

Better than par connectivity. The back panel of the IN3916 offers more than enough connectors for most purposes, including one HDMI 1.3 port for a computer or video source, two VGA inputs that can each connect to either a computer or a component video source, a composite video input, and one pass-through VGA port for a monitor. Audio connectors include a set of stereo RCA phono plugs and a stereo miniplug input, a miniplug for a microphone, and a miniplug stereo output. Menu settings let you pair any of the audio inputs to one or more image sources of your choice, so the audio source will automatically change when you change the image source.

You can also send data to the projector over a wired network, using the projector's LAN connector, or over a WiFi connection with an external $29 WiFi option, and can plug a memory key into the USB port to read JPG files. Finally, there's a second USB port to let you connect to your computer to use the interactive feature and an RS232 port for controlling the projector from a PC.

Better than par audio. The IN3916 audio suffers from a slight bottom-of-the-barrel echo effect, but no serious problems. Even better, the two 10-watt stereo Speakers are loud enough for a small to mid size conference room or classroom. For large classrooms, however, you'll want to use an external sound system.

Comes with annotation program.< The IN3916 should work with any annotation software, but InFocus ships it with Qwisdom WizTeach. The installation program lets you choose between having just those features meant for business use (primarily annotation and drawing tools), or educational tools as well including, for example, interactive maps that give the names for various countries and regions when you point to them.

Usable, but low quality, video. As with many data projectors, the IN3916's video quality is good enough only for short clips or in contexts, like most classrooms, where high quality video isn't needed. Among other issues, we saw slight posterization in skin tones in some scenes (with colors changing suddenly where they should change gradually) and a loss of shadow detail in others. However, both issues showed up only in scenes that tend to show those problems, and the IN3916 did better than other data projectors we've seen. The colors also showed the kind of dullness that indicates low contrast. p>Moderately obvious rainbow artifacts. Like all single-chip DLP projectors, the IN3916 shows primary colors one at a time, which leads to the possibility of rainbow artifacts, with light areas breaking up into little red, green, and blue areas when you shift your gaze or an object moves on screen. The IN3916 shows this effect less often than some other current DLP projectors. Even those who are sensitive to it probably won't see it often enough to find it annoying for data, but they will likely consider it annoying for long video sessions.

Limited 3D. As with most current 3D-ready projectors, the IN3916's 3D capability is highly limited. The key issues are that the interactive feature doesn't work in 3D mode; the 3D feature won't work with a Blu-ray player; and to use 3D you need enough pairs of DLP-Link glasses (at more than $100 each) for your audience. All of these limitations are typical for today's inexpensive 3D-ready projectors, but you should be aware that you may or may not ever be able to actually use the projector for 3D.

As should be obvious, the InFocus IN3916 has lots of attractive features. Not having to calibrate makes it easy to move around and still set up quickly; not having to touch the screen lets you turn literally any surface into an interactive whiteboard; and the short throw lets you project a large image from close up, so you don't have to worry about casting shadows. Beyond that, it's a complete interactive solution and one of the more impressive choices we've yet seen for the price.

For more detailed specifications and connections, check out our InFocus IN3916 projector page.

Comments (1) Post a Comment
Avital Posted Jul 23, 2013 1:24 PM PST
I am looking to purchase this and use the interactive Notebook Software from SMART technologies. Would that work?