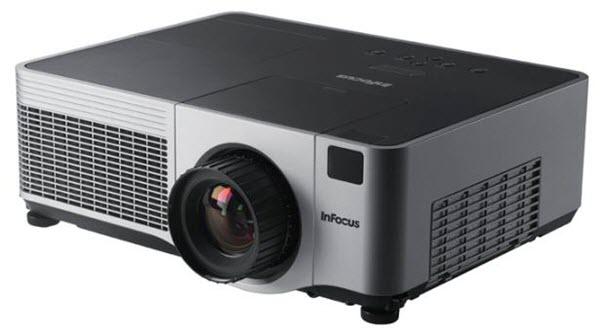 If you're looking for a projector that can throw a big, bright image that can stand up to ambient light, show complex data images at high resolution, and show 1080p video without having to scale the image to a lower resolution, the InFocus IN5110 is a great place to start. Built around an LCD engine, the IN5110 offers a 4200 lumen rating and a native 1920x1200 widescreen resolution (WUXGA). More important, it delivers eminently watchable images for both data and video.

The projector also offers any number of features to help make setup easy, ranging from horizontal and vertical lens shift, to its 2:1 zoom lens, to a host of connection options. This balance of brightness, image quality, and features doesn't come cheap. But given its ability to show high resolution images in corporate boardrooms, to large conference rooms, and small auditoriums, the IN5110 is reasonably-priced at current street prices under $5,000.

High resolution for fine detail or multiple windows. The IN5110's 1920 x 1200 resolution is high enough to let you show complex images, like engineering drawings, in crisp detail, or show multiple windows while keeping each one highly readable. You can, for example divide the screen into four 960 x 600 windows, with a bit better than SVGA (800 x 600) resolution for each one. For video, 1920 x 1200 is high enough to show a 1080p image in its full resolution. A built-in split screen command also lets you show images from two sources at once, with control over which goes on the left and which on the right.

Bright image with good uniformity. We measured the IN5110's brightness at 3406 lumens in its brightest mode and at full zoom (wide angle setting). That works out to 81% of its 4200 lumen rating, which is a higher percentage of the rating than many projectors can manage. More important, it's bright enough to throw an image that's both suitably large for the kind of venue the projector's meant for and bright enough to stand up to ambient light.

The projector also scored well on brightness uniformity, although not quite as well as the measured 85% would suggest. The brightness dropped off quickly enough along one edge of the screen (and to the outside of the standard measurement points) to be noticeable on a solid white screen. However, the lack of uniformity is still a minor enough issue so it's almost impossible to see on a solid color screen or with images that break up the area with text or graphics.

Wide range of brightness levels. For low light conditions, smaller screen sizes, or other situations where the IN5110's bright mode might be too bright to view comfortably, the projector offers a number of ways to adjust the level. First, there are four additional presets, which we measured at 1264 to 3133 lumens. Second, the eco lamp mode drops the level by a measured 21%, bringing it to 2680 lumens for the brightest mode, or 89% of the rated 3000 lumens for eco mode. Third and finally, if you set the lens for minimum zoom (maximum telephoto), which lets you get the same image size at a further distance from the screen, the brightness drops by about 44%, to 2262 lumens in brightest mode. Flexible placement, with zoom and lens shift. The zoom lens on the IN5110 offers a substantial 2:1 zoom, giving you lots of room to play with for how far you can place the projector from the screen for any given size image. You can project a roughly 97" diagonal (82" wide) image, for example, at anywhere from 10 to 20 feet from the screen. More broadly, the image size can range from a minimum 30" diagonal at 3 to 6 feet from the screen, to a maximum 350" diagonal at 37 to 73 feet.

Good connectivity. The IN5110 offers a wealth of connectors on the back panel. Although it's oddly limited to a single VGA input for a computer or component video, it also includes an HDMI port for a digital connection to a computer or video source and a set of 5 BNC connectors that are labeled Computer 3, but will work with a computer or video device, if you have the appropriate cables. In addition, it offers a component video input using a set of 3 RCA phono plugs, both S-video and composite video ports, and a pass-through VGA port for a monitor.

The four audio inputs include two stereo miniplugs and two sets of stereo RCA phono plugs. One particularly nice touch is a set of straightforward menu choices that let you assign any of the audio inputs to any of the computer or video inputs, so you can automatically switch to the right audio source when you switch image sources. This can be particularly useful if you're replacing an older projector and already have cables in place with connectors that may or may not match the default pairings of image and audio inputs on the IN5110.

Finally, the ports also include a miniplug stereo audio output, LAN and RS-232 connectors to let you manage the projector from a computer or a control box, and a connector for a wired remote option.

Near excellent image quality for data. The IN5110's data image quality was just short of excellent. In a screen showing various shades of gray from full black to full white, for example, I saw a slight color balance issue in the brightest preset mode, with a yellowish tinge in the whitest shades of gray. However, the brightest mode in any projector often has color issues. When I switched to presentation mode, the problem all but disappeared. Beyond that, the projector offered bright, saturated, vibrant color for data screens in all modes.

The high resolution also translated to excellent detail in images. Both black on white and white on black text was readable even at the smallest sizes we test with. Black text on white was marginally more readable than white text on black at the very smallest sizes, but not by much.

Better than par video quality. Video quality was easily above par for a data projector. We connected to a video source with an HDMI cable and played both Blu-ray discs and DVDs. For the most part, the projector did a good job across the board, handling skin tones well and maintaining shadow detail better than most data projectors.

In one challenging test clip, skin tones were a little greenish and ever so slightly posterized (with shading changing suddenly where it should change gradually). However, the lighting in that test clip creates problems for many projectors, and the IN5110 did better than most. On other discs with better lighting, the image quality was easily good enough to watch a full length movie, although well short of what you'd expect from a similarly priced home theater projector due to the lack of deep dark blacks and a high contrast ratio.

Well designed remote and menus. The menu system is easy to use, with the button placement on the remote earning praise for making it easy to work with even in the dark. The remote also includes the welcome touch of a built-in laser pointer.

Better than typical audio. The built-in stereo sound system, with two 4-watt speakers, suffers from a little bottom-of-the barrel hollow effect, but delivers a useful, if not impressive, level of sound quality for a data projector at a high enough volume to fill a medium size conference room. If you need more volume or better audio quality, you can easily connect to an external sound system using the miniplug audio output.

Missing leading edge feature: 3D support. Although the IN5110 doesn't suffer from any important shortcomings, there are some areas where it doesn't go as far as it might. For example, it doesn't offer support for 3D, a leading edge feature that's becoming more and more common. That said, for projectors in the IN5110's price range and below there's some question about how useful the current implementations of 3D can be. This is particularly true for use with large groups, since the projectors require active shutter glasses, which currently cost more than $100 each. Note too that in this price range 3D support is currently limited to DLP-based projectors, so you wouldn't expect the LCD-based IN5110 to offer it in any case.

Split screen limitations. In the same general category of not going as far as it might, the IN5110's split screen feature isn't as useful as it could be. Given that the WUXGA resolution delivers enough pixels for four reasonably high resolution windows, it would be nice if the feature weren't limited to two sources. Even in the context of having just two sources, the feature would be more useful if the projector offered a second VGA input to make it easier to connect two computers when neither offers a digital connector for the HDMI port. Still, it's hard to complain too much about limitations on a feature that's really an extra touch even as it stands.

Ultimately, the IN5110 offers lots of strong points and no real shortcomings. The combination of high resolution, suitable brightness, high quality images for both data and video, and easy setup thanks to the 2:1 zoom and lens shift, add up to make it a highly attractive choice. If you can make good use of 1920x1200 resolution for large rooms, ranging from conference rooms to small auditoriums, the IN5110 belongs high on your short list.

For more detailed specifications and connections, check out our InFocus IN5110 projector page.