After a skipped year in 2020 forced by COVID and a four-month delay beyond its usual June time frame, the annual InfoComm convention and exhibition is back in Orlando this week. Regular attendees are seeing a much scaled-down version of what is traditionally the projection industry's biggest and most important domestic trade show for new product introductions. Though some companies did bring a skeleton crew to man meeting rooms, barely a half dozen projector and screen makers showed wares on the exhibit floor—a sliver of those who were originally committed, and well off the 20 or so who exhibit in a normal year. Most who did exhibit did so with vastly reduced booth size. Foot traffic was relatively light but exhibitors reported a well-engaged crowd, at least through the first couple of days. 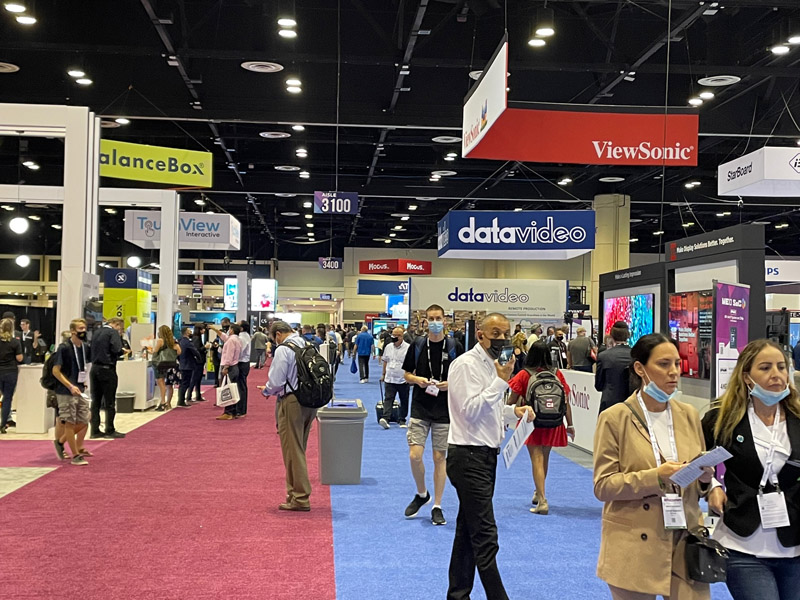 ProjectorCentral was on hand, both to present our 2021 InfoComm Best of Show Awards to those brands in attendance, and to report on what the exhibitors showed in their booths. Here's the quick rundown.

AV Stumpfl. Austrian-based screen-maker AV Stumpfl focuses only on the commercial AV market here in the U.S., and displayed some of its well-engineered and solidly built mobile screen solutions. The coolest thing in the booth was their clever SHIFT elevating frame, which allows crew members to assemble the basic screen frame on the floor, then place it on the long legs at low height before turning it upright. You then elevate the screen by simply pushing it up as the ratchet mechanism in each leg continually locks in at successively higher positions. With enough leg extensions, you can hit a max height of 217 inches. 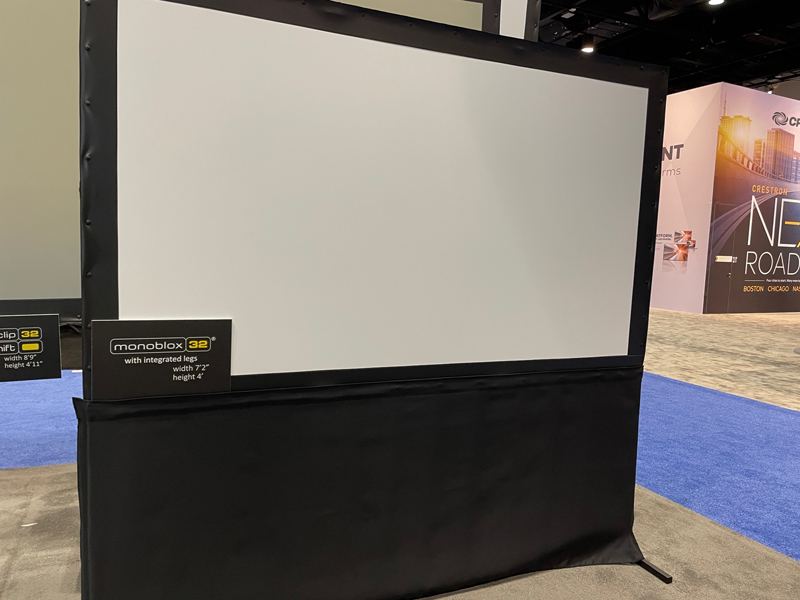 For super-quick set-up on more conventional projects, the company showed a prototype of its popular Monoblox mobile screen that features integrated legs to reduce the frame to just three quick-connect pieces that assemble in about 3 minutes. This version of the Monoblox 32 is 4 feet wide by 7 feet-2 inches tall, and should cost about $1,500 with AV Stumpfl's 1.0 gain Flexwhite material when it becomes available.

Barco. Barco offered up a smaller-than-usual but nonetheless impressive booth that spotlighted both their LED wall offerings in action but only a static display of some key projector lines. Samples of new models from the new G100 Series of 1DLP installation projectors and the UDM Series of 3DLP laser phosphor projectors were out on the floor, as was the XDX-4K40 3DLP RGB projector. The latter two were awarded ProjectorCentral Best of Show honors. Barco's rental & staging models, like the UDM and XDX, are always a treat to see in person at the shows thanks to their impressive size and breathtaking build quality.

CarbonBlack Technology. The most eye-catching display on the show floor in Orlando was the large (16x9-feet), high-performing ALR screen from CarbonBlack Technology displayed at the Nationwide Video booth. The cutting-edge CarbonBlack material, developed in the Netherlands, is specifically engineered for laser projectors, and is technologically unlike any screen that's come before it. You can read more about it in this article, but suffice to say that this nanotechnology screen delivers contrast, black level, and color rendition like no ALR screen I've seen to date, while offering a number of practical benefits that should be especially attractive to large-venue event crews and rental & staging outfits.


Draper. Draper was on hand in Orlando to promote its various mechanical mounts for LED tiles and projectors to the commercial A/V sector, and also showed off its Acumen flush-mount motorized screens introduced earlier this year. The Acumen Recharge V on display was a lithium-ion battery-powered version that goes for 500 cycles on a single charge; it displayed an excellent image on the bright showfloor using the company's TecVision ALR material. 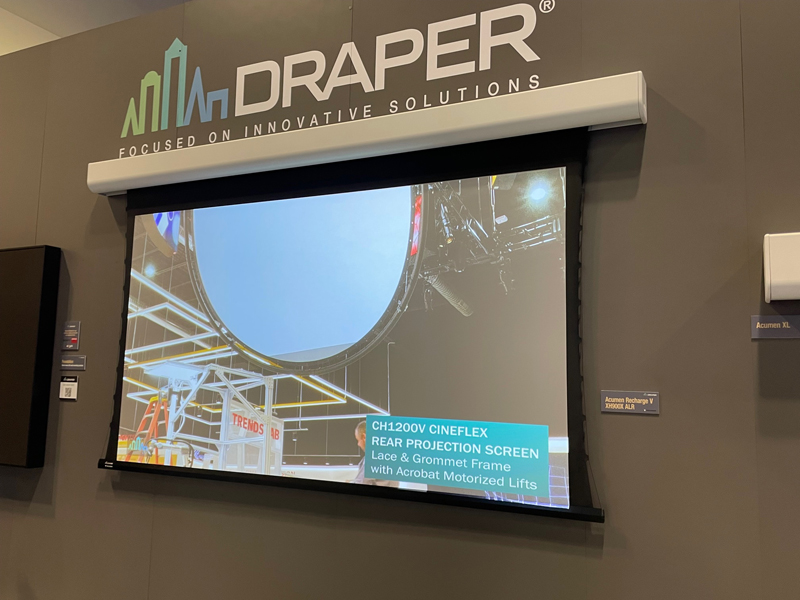 The elegant Acumen casing is easily hung on its wall mounts, similar to any screen, and it comes in two rechargeable versions. The Recharge V handles tab-tensioned surfaces including the TecVision, OptiFlex, CineFlex rear projection, and ClearSound AT acoustically transparent materials. Acumen Recharge E is available with the OptiView and ClearSound free-hanging materials. When a large screen is required, the Acumen XL casing is available in sizes up to 18-feet wide with 120-volt motorized operation.

Elite Screens/Elite ProAV. Elite showed off several of the company's ALR screens, including the DarkUST and WhiteBoardScreen Thin Edge CLR2 that were honored with ProjectorCentral Best of Show Awards. The DarkUST is a tab-tension retractable screen with a rollable version of the company's 0.6-gain CLR material; notably, it is the only motorized ALR UST screen available at the larger 120-inch screen size that most 4K UST projectors can accommodate. The WhiteBoardScreen is a version of Elite's CLR2 material with a special coating that allows the screen to function with dry erase markers and erasers.

Also on display was a prototype of Elite's 2nd generation MosicGo portable outdoor projector, which isn't due out until next year. It bumps the lumen output to 2,500 LED lumens vs. 1,500 in the original, while still using a durable, long-life OSRAM LED light engine and maintaining the same 1080p resolution. The 3200 mAH battery goes about 2 hours on a charge. The projector will have built-in WiFi and a media player for content off an SD card; also added is two-way Bluetooth so you can either output sound to a standalone BT speaker or send music from your mobile device to the projector's audience-facing speaker pair. As with the original MosicGo, the new version will carry an IP2X splash-proof rating in case you get caught in a sudden downpour. Pricing is expected to be $1,499 for the battery-equipped version, or $1,299 without the battery. 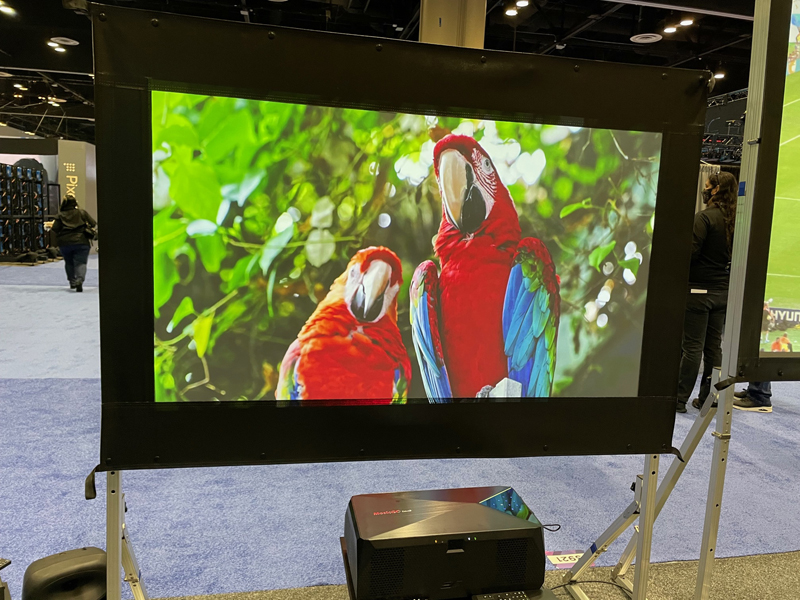 As with the current MosicGO, the projector will also be available mated with different screen options. Elite showed it at InfoComm with a new 60-inch fixed frame portable ALR UST screen that will go for $499 by itself when it ships later this quarter. A 55-inch retractable costs $399.

ViewSonic. ViewSonic showed a static display that included the Best of Show-winning LS500W LED projector due out this year, which uses a 2,000 ANSI lumen LED engine to bring most of the benefits of a solid-state 1080p laser projector to an affordable business projector at the $699 price point. Two versions with home theater tuning are also planned for the consumer market, both at the same 1080p resolution. The X1 is a long throw version featuring 2,000 ANSI (about 3,000 LED) lumens, and a 1.3x zoom; it has a targeted price point of $899. Full details are expected to be officially announced at the 2022 CES in January in anticipation of availability during Q1. A short throw X2 version with a 1.2x zoom will follow later. 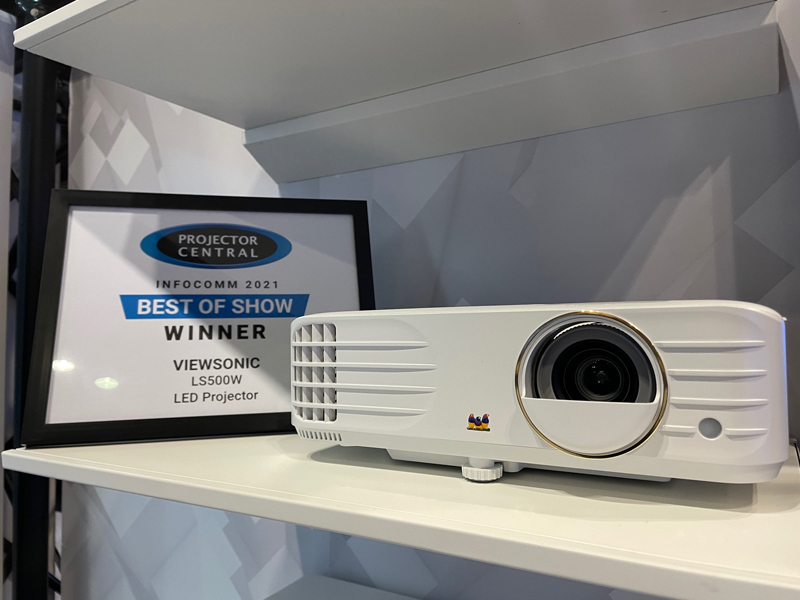 Home theater buffs will also be interested to learn that ViewSonic's long-awaited X1000-4K LED UST projector is also finally set to appear at retail. Quantities will be limited initially thanks to the industry's ongoing COVID-related supply-chain and freight issues, which have inhibited production of some products and left others stranded on docks here in the states, but the X1000-4K should be on the market before year end at an expected retail price of $1,899. The X1000-4K is notable for being one of only two living room UST projectors we're aware of to use an LED light engine instead of a laser, which trades some brightness for a more attractive price point that should help UST TVs appeal to a much broader market. (The JMGO O1 and O1 Pro are also LED-driven and expected to reach market shortly.) 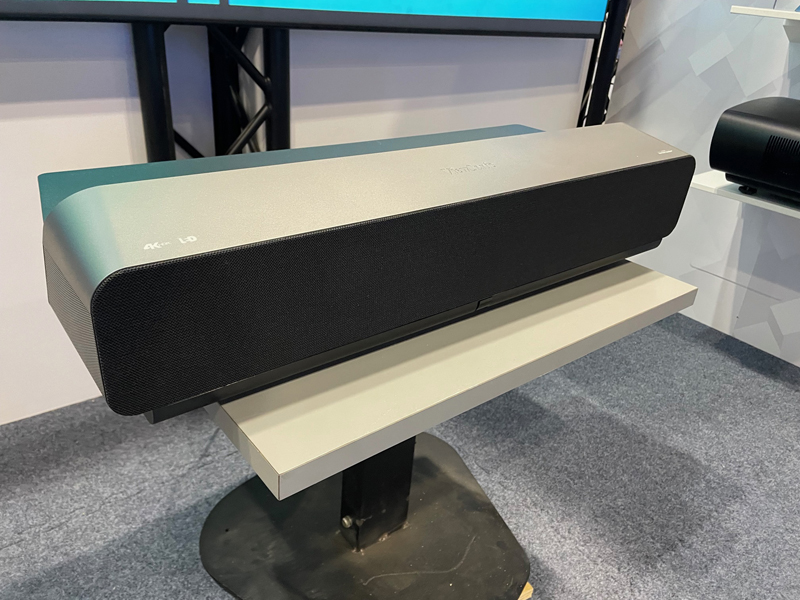 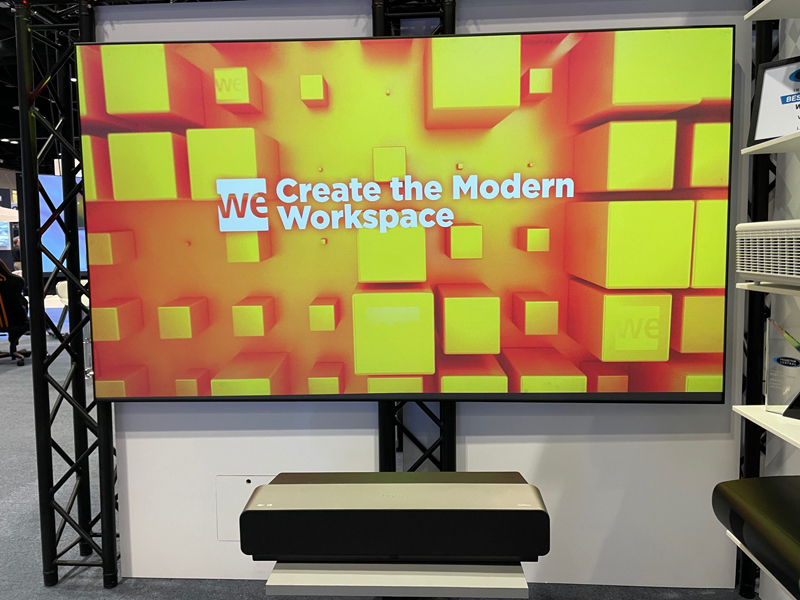 The X1000-4K also holds the honor of having perhaps the longest public gestation period of any projector in recent memory, having been first announced at CES in January of 2019. ViewSonic demo'd the projector on the floor at InfoComm with a video loop of punchy graphics on an ALR UST screen, and it seemed to fare well in the bright light of the exhibit hall.