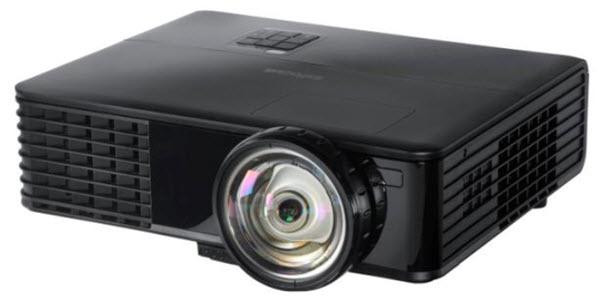 The InFocus IN146 features a short throw, widescreen (1280x800) design, 3D capability and a full feature set. The projector excels at creating a big and bright image where throw distance is limited. The IN146 works well placed on a tabletop or on a mobile classroom cart or is a great fit for interactive whiteboard use when ceiling mounted. It is a great value thanks to a maintenance free design with up to a 6,000 hour lamp life, and a street price of less than $800.

The best use of the IN146 will be where space is at a premium or if an extremely large screen is required. This projector is extremely flexible as it has the light output to handle either very large screens or high amounts of ambient light. It can also be configured for a very pleasing and color accurate video performance.

The IN146 will project an image of 100 inches in diagonal at a throw distance of slightly less than 3.5 feet. It achieves its short throw with the use of a wide angle lens rather than a mirror system, thus eliminating the dust or other contamination potential that the mirror systems can be susceptible to.

The projector weighs in at just over 6 lbs. While not as small as most portable projectors, it could easily fit in a laptop sized travel case. The projector is decked out in a black case with a clean, industrial design. Picture Quality and Video Performance: When optimized for video, the IN146 has a very pleasing and visually accurate color balance. Flesh tones were nicely rendered with no hint of red, sun burnt completions that are common to many business class projectors. Grass on broadcast NFL football was a crisp green without taking on neon hues. I found the best color performance by starting with the Video mode preset , switching Brilliant Color to Normal and setting the Color Temperature and Gamma to Warm and Film, respectively.

When configured with these settings, light output was reduced to 779 lumens in high lamp or about 630 lumens in low lamp. The one negative to video performance was the overall black level as blacks appeared as more of a dark grey. I did most of my viewing in a dark room in low lamp mode as I found the improvement to black levels worth the reduction in overall brightness.

Peak Brightness: Our test sample exceeded the brightness specification of 2,700 lumens with an actual output of 2,754 lumens. The projector has a number of image adjustments that impact light output. Peak brightness was found by selecting the High Lamp option, increasing the Contrast level from the default, and setting Color Temperature and Gamma settings to Bright.

Color performance in this configuration was slanted to green, but I found it acceptable for slide show content. Switching to low lamp mode drops light output by about 20% to 2,193 lumens.

Throw distance & Image Offset: The short throw design allows the projector to produce a large image with a minimum about of space. For a 100 inch diagonal image, the IN146 needs less than 3.5 feet of distance from the screen. I measured the image offset of the projector at 6% of image height with the image starting above the center of the lens. The projector has a 30 inch minimum throw that produces a 71 inch diagonal image. It does not contain a zoom lens, so the image size can only be adjusted by changing the distance between the projector and the screen. If the projector is to be used in a portable manner, a mobile cart will help to easily adjust throw distance and image size. Additionally, the maximum throw distance of the projector is 65 inches which creates a giant, 156 inch diagonal image. Backing the projector up to the 4 to 5 foot range will rapidly create an image that is too large to use in most classrooms. Lens Performance: Lens performance was good, the projector produces a sharp image with consistent focus from image edge to edge. There was a minor amount of barrel distortion to the image, where the top corners of the image are rounded down as compared to image center. At an image size of about 90 inches wide, the vertical offset between the top of the image in the center and at the edges was less than an inch. If users find this distracting, the image can be easily over scanned beyond the screen with a slight backwards nudge to the position of the projector.

This projector does not have an auto-keystone function, but it does have a large range of electronic keystone adjustment. While this range allows for extreme angles (near 45 degrees) of projector incline to be corrected, using large amount of correction will reduce image size, usable resolution, and brightness. Keystone performance in normal range of angles was very good with small font text rendered clear and readable thanks to the InFocus correction algorithm and the relatively high native resolution.

Value: Lamp life is rated for 6,000 hours in low lamp mode. Additionally, the IN146 has a 4,500 hour lamp life in high lamp mode, which is well above the usual 3,000 hour high lamp life cycle on the average business projector. The projector features a filter free design that requires no additional maintenance. It includes a two year parts and labor warranty and a 6 month limited lamp replacement warranty. Additionally, InFocus also covers the DLP chip for an additional 3 years. The IN146 can be found for a street price of less than $800.

Full Featured input panel: The IN146 includes an HDMI input, two VGA D-sub monitor inputs (and VGA monitor pass-through), one S-video and one composite input. Audio input to the projector is possible over the digital HDMI connection or the analogue 3.5mm connectors. A 3.5mm audio output is also provided. The IN146 also supports remote connection and control of projector functions via standard RS232 protocol. The projector has a mini-USB input that is used for firmware updates and for presentation slide show control via the remote control when connected to a computer.

Brightness Uniformity: Our test sample measured 62% brightness uniformity, which is lower than average. While this variation was not noticeable with most viewing material, it was apparent on a totally black screen. The image was brightest toward the bottom third of the screen (centered around the lens) and least bright in the top corners when the projector was table mounted.

3D Compatibility: While the IN146 is capable of displaying 3D content using active shutter glasses, it is limited in compatibility with standard 3D formats as it does not contain a 1.4 version HDMI input. I was able to test 3D performance using the NVIDIA 3D vision system using a old driver set, but was unable to get Blu-Ray content to playback as the older driver was not compatible with the most recent version of the ArcSoft Total Media Theater software player.

The IN146 performed well with side by side and frame sequential material from the NVIDIA Stereoscopic player. One of the major advantages of a DLP 3D display is the lack of ghosting (when the stereo separated image is visible in the wrong eye) that is noticeable on other display technologies. The 1280x800 widescreen resolution was a great asset to 3D performance and gives the IN146 a significant advantage over 3D capable 4:3 aspect ratio XGA projectors. While higher resolution benefits both 2D and 3D video, higher resolution in the 3D mode is most noticeable in the depth component of the 3D image. The higher resolution projector will produce a image depth that is consistent or smooth across the entire depth range. A lower resolution display will recreate depth at distinct levels, resulting in a cardboard cut-out or View-Master type effect.

Remote: The ergonomics and function of the remote control are limitations to the overall IN146 experience. The remote is rectangular with inset side walls and does not fit very well in the hand. Buttons are a soft touch rubber material and are set flush with the top face of the remote. This button design makes it difficult to find buttons without looking directly at the remote. Additionally, the remote and projector menu structure do not contain a menu 'back' option. One needs to use a combination of the enter key and left arrow to navigate back to higher points in the menu tree.

High Altitude Fan Noise: Fan noise in both low and high lamp mode was acceptable and would not be distracting in a normal setting. It was more noticeable in high lamp mode, but this is an acceptable trade-off if increased light output is required. The High Altitude Fan setting was a different story. In this mode the fan noise was quite significant and would be distracting in most settings. If the High Altitude Fan mode is required, I would recommend a ceiling mount to achieve separation between the projector and the audience.

The widescreen InFocus IN146 features a bright and dynamic image with a maintenance free design and additional features that make it a great fit for the office or classroom. Its unique short throw design produces an image nearly twice as wide as the distance between the projector and screen, so you don't need to position it back in the middle of your audience. The IN146 can produce high light output for PowerPoint material and can also be color accurate when critical viewing of photos and video is required. It offers a combination of value, image quality and flexibility that results in a very highly rated projector.

For more detailed specifications and connections, check out our InFocus IN146 projector page.