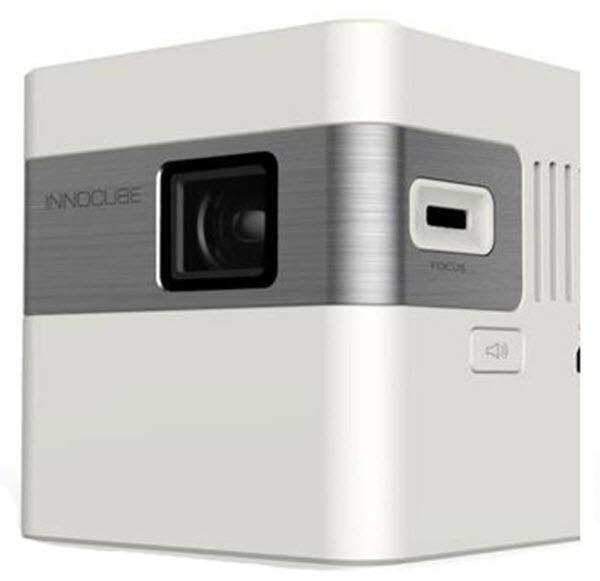 Out of the Box

The cube has become the trending shape in the technology world. From mp3 players to speakers and now to pico projectors, its versatility has inspired some interesting gadgets. My current brush with cubism is with Innoio's Smart Beam Innocube. At 1.8 x 1.8 x 2.0 inches in size, this pico projector is smaller than a Rubik's cube and is much less perplexing. It has been hailed as a story time projector for kids, but don't let this description fool you. The Innocube puts the fun back into functional.

The Smart Beam pico projector is low maintenance and portable. Packaged with the projector are an AC adapter, HDMI cable, and an MHL cable. Each end of the cables is clearly marked as to where they connect. I am not a fan of cables, and I appreciate Innoio's step to eliminate the guesswork for me. When using an iDevice, such as an iPhone, iPad, or iPod, you will need to use the Apple Digital AV adapter or Lightning Digital AV adapter (sold separately) with the provided HDMI cable. This projector also comes wrapped in its own plastic shock absorber. Mine had a clear case; however, I have seen it with a multi-colored sleeve that resembles a block of Legos.

The Projector in Use

When it comes to projectors, I rarely have one that I am willing to let my boys actually handle; the Innocube is the exception. With very few bells and whistles, it is the perfect "gateway" projector for the six to twelve year old audience. Sure, you can use it at night to lull your kids to sleep by displaying shows and movies or making them watch you play Candy Crush at 100 inches diagonal. Wanting to introduce my boys to the classics, we used it to watch Tremors at 76 inches diagonal. Who doesn't love 76 inches of Kevin Bacon? With a native resolution of 640 x 480, the projector displays a clear, decent image that remains remarkably detailed up to roughly 100 inches before becoming washed out. With only 35 Lumens, you need to battle your ambient lighting. The classy comforter over the windows move works for us, but no matter what method you use, remember that darker is always better.

Like other pico projectors, the Innocube easily connects to your smartphone or tablet. You can stream videos, pictures, and games. However, you can also hook this projector up to your gaming consoles, laptops, and cable boxes if they are equipped with an HDMI output. The two inch cube can stand in as a television in your kid's room. Plus, when your kid starts giving you attitude, it is much easier to take the cube away than ripping a 100 pound flat panel off of the wall. My ten year old and I hooked the projector to our XBOX 360 via the HDMI cable. We were able to play NBA 2K13 without monopolizing the television. I found that I got the best picture at 55 inches diagonal when I positioned the projector 77 inches from the wall. Since pico projectors rarely have a kicking sound system, sitting next to the projector is the best seat in the house. While this projector is obviously geared towards kids, I did find myself grabbing it more than I had expected. I would reach for it when I needed to use YouTube for a recipe as I prefer watching a tutorial on how to julienne my carrots rather than reading one. Plus, unlike with my iPad, I don't drip ingredients over it since I can set up the Innocube safely out of the path of my mess. I also paired it with a few sight word and flash card apps and gave math review lessons to my kiddos, who could not ignore the problems displayed at 50 inches across their bedroom walls. Plus, if you find yourself with no electricity for hours after a tornado, as we did last month, you can still entertain yourself and your family with a Friends marathon via Netflix on your smartphone.

Even though the Innocube wins bonus points for resembling a miniature AllSpark from Transformers, it has several issues that need to be considered. First, it has a built-in speaker. Unfortunately, there is no way to control the volume. It seems to have been pre-set on semi-loud/semi-quiet. In principle, this makes sense as this projector is supposed to be for bedtime, but really? Everything in my house has dual functions, and my electronics are no exception. It has to be able to survive the deafening roar inside my home at all times of the day. Pre-setting the volume seems a little unfair and presumptuous to me. Plus, I am convinced the person who set it does not have children. Also, the current price estimate is about $400. Don't get me wrong, the Innocube is a solid gadget for your kids. However, at this price, it should not only be used for story time, but it better brush the boys' teeth and tuck them into bed. The resolution is decent, and the lumen output is acceptable, but the projector is very basic. This price is simply too high. Finally, with the plastic protective sleeve, I found it difficult to get the projector to sit flat on a surface. Half of the time, I only focused on the fact that the picture was lop-sided. It would also help to provide longer cables. It is a long way from my XBOX to the nearest flat surface. The short cable forced me to summon my inner MacGyver and fashion a mountain of books to reach the gaming console. I don't mind being forced to be creative, but I would rather save it for a more interesting challenge.

Innoio's Smart Beam Innocube has become the Inno-cool around my house. With its tiny size and simplicity, it is a great fit for families with kids under twelve. I have yet to meet a kid who is concerned with native resolution and lumen ratings. They tend to see things for what they truly are: a well-designed projector that is fun not only at bedtime, but also throughout the day.

Comments (2) Post a Comment
Gabriel kadis Posted Apr 20, 2021 5:26 PM PST
I have a smart beam that looks like a rubik's cube how do I connect it and make it work with my phone I use the cable but it just says please connect it's from Korea I think
Rob Sabin, Editor Posted Apr 21, 2021 4:44 AM PST
If you click on the link for the product name in the review or search for it in our database you will find its product page where you can download the user manual.