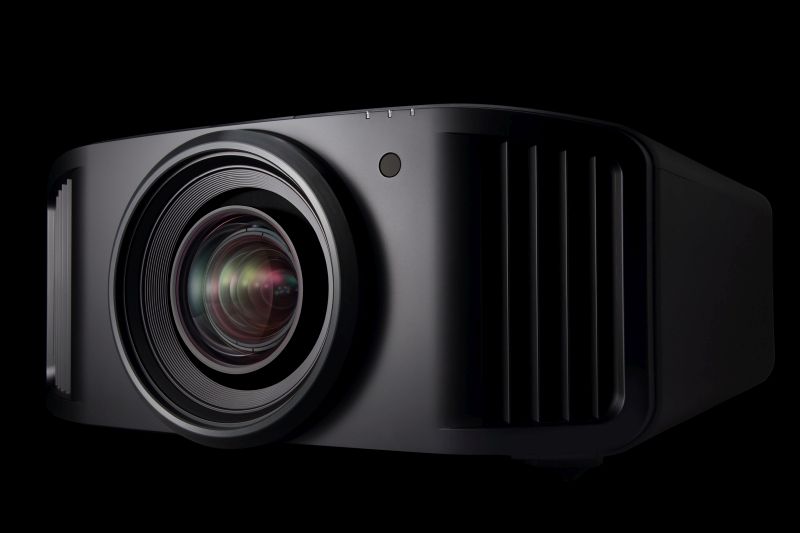 The pace of advancement in home theater projection technology is usually described in increments. Changes are evolutionary rather than revolutionary. Year over year, we see brightness creep up and contrast improve, while higher resolution—when it occasionally comes along—offers up more detail. From time to time, a new twist on an old theme will vastly enhance our viewing experience, such as the introduction of high dynamic range and wide color gamut that's now layered into our movies and TV shows, and made all the better when viewed on a big projection screen. Still, if you roll a slew of evolutionary advances into one product it becomes revolutionary, and JVC's new line-up of recently announced laser projectors is nothing if not that.

Of course, this shouldn't come as a big surprise. Few projector makers can stake a greater claim to effectively taking advantage of new developments than JVC. This started with the company's commitment years ago to using its own proprietary LCoS-based D-ILA (Digital Direct Drive Image Light Amplifier) imaging chips, which immediately placed JVC in the upper-echelon of projector brands. LCoS imagers are challenging to engineer and more expensive to produce—which is why so few manufacturers offer them. But they have distinct advantages over competing imaging devices. First, the use of an opaque reflective layer behind the liquid crystal cells used to create the image means that all the electronics and connections needed to address the pixels can be hidden behind the layer. This results in a super-tight pixel array with a very high fill-factor that makes the spaces between pixels vanishingly small. JVC's D-ILA chips also use vertically aligned liquid crystals, which are already black in their natural state before being twisted by the signal current to open up and pass light. That translates to a dark native black and high contrast that other projection display technologies can't match.

JVC's new projectors use the same native 4K (4096x2160) 0.69-inch D-ILA imaging chip introduced in 2017 for JVC's most recent family of lamp-based projectors, but they take flight from there with a host of new features. Three new laser projectors are offered in both the Procision Series targeted at consumers and the Reference Series dedicated to professional AV integrators. They include the Procision DLA-NZ9, DLA-NZ8, and DLA-NZ7, and the Reference Series DLA-RS4100, DLA-RS3100, and DLA-RS2100. The models are priced at $24,999, $14,999, and $9,999 respectively. Let's take a look under the hood.

Laser light engines have now largely replaced lamps among business and commercial entertainment projectors, for good reason. Lasers last longer than lamps and provide more consistent brightness and color over their life while eliminating the cost of ongoing lamp replacements. They also offer rapid turn-on compared with lamps and shut down instantly with little or no need for fan cooling after the fact.

Nonetheless, laser has had a slower adoption rate among home theater projectors where image quality is critical. So, JVC's introduction of a broad laser offering is significant, particularly given its attractive pricing compared with competitors. The line takes advantage of a newly re-engineered BLU-Escent laser diode module, whose blue laser light is combined with a phosphor wheel to create the red, green, and blue primary colors for the three D-ILA imaging chips. Compared with the first-generation BLU-Escent module found in JVC's prior flagship DLA-RS4500, the new module provides brighter light from a smaller space, and it runs cooler to allow for exceptionally low fan noise from a laser projector. It's rated for 20,000 hours of life—equivalent to more than nine years of watching the projector for six hours a day.

In the top two models, the DLA-NZ9/RS4100 and DLA-NZ8/RS3100, the light coming from the BLU-Escent module ends up passing through an advanced high-contrast optical block developed specifically for this new projector line. Critically, a fresh approach was applied to the required prism polarization, which allows the projector to more effectively use the green light component. Green is a major contributor to perceived brightness, so this contributes about a 10% increase in optical efficiency that helps the projectors reach as high as 3,000 ANSI lumens in the DLA-NZ9/RS4100. A new optical device in the light path also helps to eliminate stray light in the optical block to further deepen blacks. As a result, the DLA-NZ9 enjoys a 100,000:1 rated native contrast ratio. (That spec is 80,000:1 for the DLA-NZ8/RS3100 and 40,000:1 for the DLA-NZ7/RS2100.) Coupled with dynamic control of the laser, all the projectors are able to claim infinity:1 dynamic contrast during black transitions in content.

Furthermore, JVC has retained the superb all-glass lenses introduced for its previous projector line up, including a 100mm 16-group/18-element lens for the top model and a 65mm 15-group/17-element lens for the other two. What all of this translates to is the ability to accommodate bigger screens with better HDR highlights, faster and more precise control of light and dynamic contrast than a mechanical aperture can provide, and sharp images out to the corners, even with 8K signals.

HDMI for Today and Tomorrow

All three of the new JVC projectors feature a pair of today's most advanced 48 gigabit-per-second HDMI ports (with HDCP 2.3 copyright management). That makes them the only projectors for now that can take full advantage of 4K/120 Hz frame-rate video games from a computer or the latest gaming consoles. This high-resolution/high frame rate capability combines with JVC's Low Latency mode to reduce input lag and make for a satisfying, big screen gaming experience. It also makes the new JVCs ready for any other 4K/120 Hz content that might come down the pike.

Just as critically, the wide bandwidth HDMI ports are also compatible with 8K input signals up to 60 Hz frame rate, so the projectors provide an enhanced experience today while remaining forward-looking toward tomorrow. But JVC didn't just stop at the ability to take an 8K input. Two of the projectors also offer a more advanced version of its e-shift pixel-shifting technology that, for the first time in a consumer home theater projector, takes full advantage of all the information in an 8K video signal.

By way of background, JVC introduced e-shift pixel shifting years ago as way of doubling the number of on-screen pixels from the 1080p D-ILA imagers in its first 4K-compatible projectors. The combination of a second set of pixels (shifted one-half pixel down and one-half pixel over), along with advanced signal processing, effectively delivered apparent 4K detail on screen.

What's different here with JVC's new 8K e-shiftX technology, besides the use of a native 4K imaging chip, is the rate at which the pixel-shifting occurs. The previous e-shift system operated at 120Hz, which allowed a two-phase pixel shift and a doubling of the pixel count. That feature is still offered in the DLA-NZ7/RS2100, which is used in combination with the native 4K imagers to enhance 4K or 8K content using a total of approximately 17.7 million addressable pixels. But the new system, assisted by a massive boost in signal processing power thanks to updated LSI chips, uses a 240 Hz driver to enable four-phase pixel shifting. So, with e-shiftX, which appears in the top-line DLA-NZ9/RS4100 and mid-level DLA-NZ8/RS3100, all 35 million-plus pixels in a single frame of DCI 8K video are delivered to the screen with no need to toss pixels or otherwise truncate the information. In other words, it delivers pixel-perfect rendering of 8K content. And the results go way beyond the ability to produce more detail. All those extra pixels in an 8K signal can also provide finer gradations of color and brightness. With true 8K content, it amounts to an eye-popping and more cohesive, film-like viewing experience.

JVC's prior line-up of 4K lamp-based projectors were rightly lauded from Day 1 for their excellent management of HDR content. JVC was the first projector maker to offer an Auto HDR function that made a best-guess tuning for the HDR tone-mapping based on static metadata provided in HDR10 programs. The company quickly evolved this to its highly regarded Frame Adapt dynamic tone mapping system that analyzes the content in real-time on a scene-by-scene or frame-by-frame basis to deliver the very best HDR experience with the least amount of user interaction. That feature was rolled out in a firmware update offered to all prior owners. A year later, another update added a Home Theater Optimizer function, which further tuned the HDR image based on specific installation criteria such as lamp life, lens zoom settings, screen size, and screen material/gain.

All of that has been carried over to the new laser projector line, along with JVC's Cinema Filter that can be engaged to provide full DCI-P3 gamut coverage in the top two models. But a new addition found in all three models is compatibility with HDR10+. HDR10+ programs contain scene-by-scene dynamic tone-mapping instructions for the display that is embedded in the content stream. So, JVC users will now have the option to enjoy either JVC's own Frame Adapt image or the dynamically tone-mapped picture that was envisioned for them by the program creators.

Given all this innovation packed into JVC's new projectors, it's also important to point out what hasn't changed. Installers and consumers who know JVC's prior projector line will find the new products comfortably familiar and easy to work with. The internal menu system is essentially the same, with minor modifications to accommodate new features like the laser Dynamic Control function that replaces the old dynamic aperture settings. JVC has retained the helpful Auto Content option added via firmware update to its previous line, which allows users to select which specific picture mode and settings to engage with different SDR and HDR signal types. Similarly, remote codes have been carried over, so little modification will be required to existing control systems in the event of an upgrade. All prior control connections are found in the new models, including LAN, RS232C, and 12v Trigger, and the projectors are Control4 SDDP compliant. Even the cabinet dimensions and four-corner mounting points have been kept to make swaps as seamless as possible.

Furthermore, the new laser projectors still offer 10 settings memories that can be set to recall lens zoom, shift, and focus; pixel adjustments; screen masks, anamorphic scaling, and picture tuning. And, like prior models, the projectors are all ISF-Certified for Day/Night mode calibrations by ISF-trained technicians. JVC also continues to offer its own free, downloadable auto-calibration software that can be used with a compatible color meter.

As you can see, there's a lot to talk about in JVC's new-generation laser projectors, and it all shows up on the screen. Taken together, the new line breaks new ground technologically and further cements JVC's position as the premiere brand for those seeking the ultimate in home theater projection.