Two new projectors are coming from LG—the single-laser ultra-short throw HU715Q and the long-throw HU710P that uses a hybrid laser/LED light engine. Both are 4K resolution (3840x2160) DLP projectors (using XPR pixel shifting technology) offering HDMI 2.1 with auto low latency mode (ALLM) and 4:4:4/RGB 10-bit support (though neither has the bandwidth to display 4K/120Hz signals). They also run LG's webOS with the ability to download and run many streaming apps, including Netflix (a rarity among projectors), and they support AirPlay 2 and wireless mirroring.

The hybrid light engine of the HU710P uses a blue laser paired with two red and blue LED modules. The two LEDs are not used to push brightness—like the Dynamic Green LED module in the HU70LA—instead being used only for direct reproduction of those color primaries. The blue laser works in conjunction with a solid state phosphor chip to produce green light, while the red and blue LEDs produce red and blue to cover 94% of the DCI-P3 color gamut. There is no color wheel in the HU710P. It is rated for max brightness of 2,000 ANSI lumens and a dynamic contrast ratio of 2,000,000:1. As with LG's earlier HU810/AU810 laser projectors, the HU710's Brightness Optimizer offers a fixed (not dynamic) Iris Mode—to adjust the light output based upon ambient lighting—and Adaptive Contrast, which adjusts the light source and processing dynamically based on whether the image content is bright or dark.

The HU710P has a 1.6x zoom and a throw ratio of 1.3-2.08:1. A panel on the top of the projector (above the lens) opens to reveal zoom and focus rings. Dials on the side of the projector provide both vertical and horizontal lens shift. The projector can produce an image up to a 300-inch diagonal.

The HU715Q ultra-short throw projector uses a single blue laser with a combination of a phosphor wheel and color wheel, similar to most UST projectors in its affordable price class. LG rates the light output of the HU715Q at 2,500 ANSI lumens with a dynamic contrast ratio of 2,000,000:1.

With a throw ratio of 0.22:1, the ultra-short throw projector is capable of images up to 120-inch diagonal with its back placed 12.4 inches away from the screen (from screen to the front of the HU715Q is 17 inches). Included is Brightness Optimizer II with two key features. Auto Brightness works in conjunction with an ambient light sensor on the front of the projector to darken or brighten the image based on room lighting, while Adaptive Contrast as described above is also present. 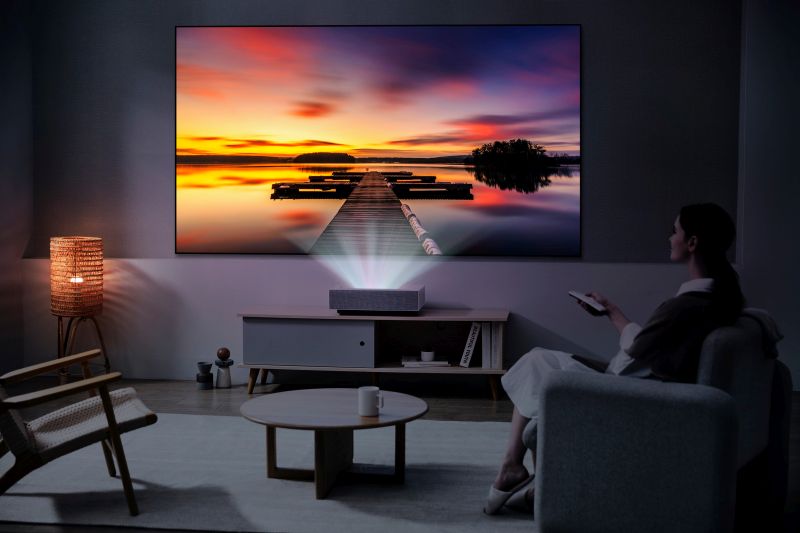 The 715Q's built-in audio system features four front-facing drivers including a tweeter and woofer for each stereo channel, plus a pair of woofers on the rear of the unit for enhanced bass response. Each channel is driven by 20 watts of power. This 2.2 channel stereo sound can be augmented with a pair of additional Bluetooth speakers for up to a 4.2-channel system using select LG speakers, though any single third-party Bluetooth speaker should also work. 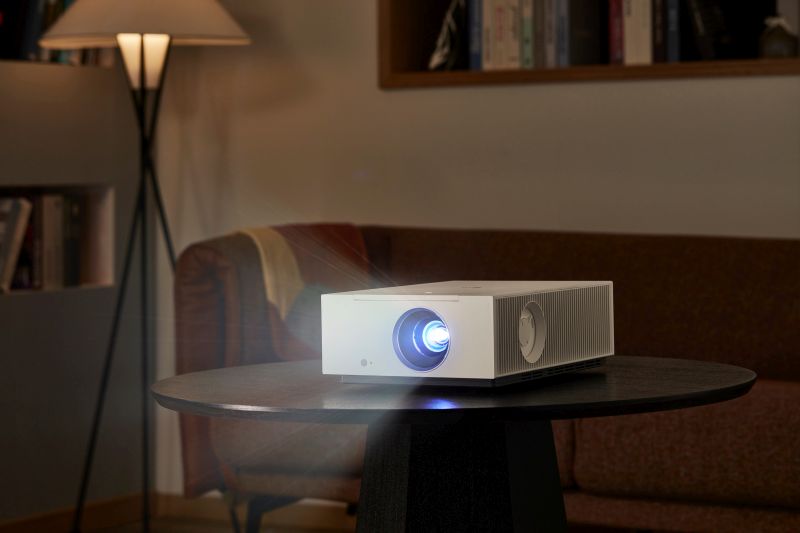 - Does it need an external power adapter? How big? -I need to know where is the air outlet; in the shift control knobs side like the 810? -Does it integrate the new Ti DLP chip with no picture frame and bigger mirrors angle reflection?
Rob Sabin, Editor Posted Feb 17, 2022 8:57 AM PST
Jose, see our review of the HU710 for more info...

But to answer the questions:

- Yes, this uses an external power brick whose size is described in the review. It is a couple of inches less long than the projector's left to right width and less than 2 inches tall, which suggests it might be hidden atop the underside of the projector in an inverted ceiling mount.

- like the 810, the air intake and outlets are on the sides of the projector

Thank you, Mo
Rob Sabin, Editor Posted Mar 17, 2022 9:24 AM PST
Mo, these are different animals, but based on their brightness and the most effective HDR performance the two laser models, the 715 short throw and 810 long throw are the best choices. The 810 is a more sophisticated projector with more adjustability if a long-throw option is plausible; otherwise the 715 is an excellent, high value choice at its price.
Alfredo Posted Apr 16, 2022 12:41 PM PST
I have a question regarding brightness I have a room with a lot of light, and would like to chose the projector with better brightness. Between LG HU715QW and Benq v7050i which one would be a better option for you??

Thanks
Rob Sabin, Editor Posted Apr 18, 2022 7:43 AM PST
Alfredo, the question you want to ask is "which projector delivers the highest brightness while retaining accurate color?" Mark covers this in his reviews for both projectors.