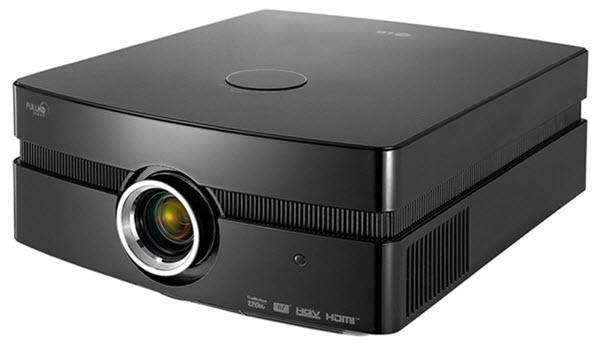 One of the most surprising new 1080p models coming to market this year is the LG CF181D. At an official street price of $2,499, it is the least expensive LCoS 1080p projector to come to market in 2009. It is also, hands down, the brightest home theater projector we've ever seen when calibrated for optimal video performance. It is scheduled to commence shipments toward the end of the month, but we've had a chance to see a late edition pre-production unit. LG has come out of the blue to challenge Epson, Mitsubishi, and Sony with a formidable offering of their own in the mid-$2,000 price range.

Brightness. This may be hard to believe, but after calibration, we measured the modified Cinema mode on the CF181D at a whopping 1219 ANSI lumens, with lamp on high and lens at wide angle. We normally think of 800 lumens as being the bright end of Cinema modes in home theater projectors, so this is an astounding number.

For dark theater viewing at screen sizes of 120" to 150" diagonal, 1200 lumens is way too bright. In order to cut brightness, you can go to low lamp mode, which dropped our Cinema mode to 887 lumens. For most users, that is still too bright. Lumen output can be cut further by setting the projector farther back from the screen and using the long throw end of the zoom. If you set its 1.8x zoom lens all the way back to its maximum long throw position, brightness is curtailed by another 26%, down to 656 lumens. That's not much loss for a zoom lens of this range-normally we'd expect to lose about 35% on a 1.8x zoom lens.

The CF181D has several other precalibrated operating modes. Vivid is the brightest, measuring 1478 on our test sample. Standard and Game modes both put out 1071 lumens with the lamp on high. Sport mode produced 936. It is odd to find non-video optimized modes producing less brightness than the Cinema mode.

Picture Quality. The CF181D delivers a magnificent, sharp, extremely natural, highly three-dimensional image when displaying HD images of average light level, or brighter than average light level. We set it up side by side with the Epson 8500 UB on the large Da-Lite JKP Affinity screen we use for 1080p shootouts. The CF181D was able to trump the Epson 8500 UB in apparent sharpness and picture depth in most scenes in an average Blu-ray movie. However, its one weakness is maximum black level. When the screen goes to black, or rolling credits on a black background, or a scene of stars in deep space, the CF181D has the weaker black level than any 1080p model in its price class. Since this is not the typical scene that one views, it is usually not an issue of consequence. But for those who crave deep blacks when the screen goes to black, the CF181D leaves something to be desired. On the other hand, in a scene with average light levels and high dynamic range, black elements in the picture look plenty deep. There is no impression of muddiness at all. In fact, in this type of scene the CF181D can produce whiter whites and blacker blacks than the 8500 UB.

When switching to standard definition DVDs, the CF181D's limitations in black level become more apparent. In the opening scenes of Get Shorty on DVD, John Travolta's black coat and shirt are not as black as we'd like to see, and dark scenes have some muddiness that is not there in HD material. Shadow detail is lacking.

Frame Interpolation. The CF181D has a frame interpolation system which is quite useful for 60p material, and not so much for 24p. Like the JVC RS25, if your source material is HD video at 60 fps, the CF181D's frame interpolation system will produce a clearer and more stable image. It is excellent for music concerts, live performances, sports, and so forth. On the other hand, our test unit does not perform well with 24p movie material. It seems to jump in and out of frame interpolation, creating a jerkiness in camera panning shots that is quite distracting. We hasten to remind readers that we have a pre-production sample, and LG may fix this prior to the release of production units.

Calibration. Our preproduction sample was not properly calibrated. We have no idea whether final factory calibrations will be different than they are on our sample. So the following data may be irrelevant. But we used the CalMan Pro calibration system to bring Cinema mode into a reasonably flat 6500K gray scale. Starting with the Medium color temp, the adjustments were these:

Zoom and lens shift. The CF181D has a 1.8x manual zoom lens, and vertical lens shift that travels a range of 2.6 picture heights. Throw distance for a 120" diagonal screen is 12 to 21.5 feet, which is typical. A shelf mount behind the seats is the ideal installation scenario, but the lens shift allows for ceiling mounting as well. If mounted on a shelf against a rear wall, keep in mind that the projector is 18" deep, and the connection panel is on the rear. We would allow six inches clearance between the rear of the unit and the wall for cables and heat dissipation, so the lens will extend out two feet from the wall.

Remote and menu With the screen at a distance of twelve feet from the seats, and the projector directly behind the seats at 14 feet, the projector would not respond to the remote signal being bounced from the screen. Moving two feet closer to the screen solved the problem. If your seats and projector throw distance are going to be at least 12 and 14 feet respectively, installation planning should anticipate the need for the person controlling the projector to be seated in line of sight, so the remote can be pointed directly at the projector.

The remote itself has great backlighting, with buttons well spaced and easy to read in the dark. Several buttons give direct access to controls, enabling you to bypass the menu. These include mode, aspect ratio, input source, color temp, gamma, and others.

The menu layout begins with a display of six options: Picture, Adv. Picture, Screen, Option, Information, Input. Selecting any of these takes you to a secondary menu where all six are accessible again, but only by icons that one needs to learn to recognize. Once you become familiar with them, the opening menu screen becomes redundant and adds an extra unnecessary click to get you into the menu. Like most menus, this one takes some time to learn. It is not obvious, for example, which image controls are in Picture and which are in Advanced Picture until you explore it and get familiar with the layout. Want to switch the lamp from low to high? That's in Menu/Advanced Picture/Expert Control/Lamp, which is not as intuitively obvious as other menu systems.

The CF181D and the 8500UB are priced very close to one another. A key advantage of the CF181D over the 8500UB is its brightness in Cinema mode. The CF181D is more than double the light output. So for very large screens, 200" diagonal and greater, the CF181D has a decided advantage, primarily with HD source material. It is true that the 8500UB has a Living Room and Dynamic mode that exceeds the brightness of the CF181D, but HD picture quality in most scenes is superior on the CF181D, so the trade off between incremental brightness and slightly less picture quality is a questionable one.

The 8500UB has a much deeper black level when the scene is black or very dark. On the other hand, in an HD scene with average light levels and good dynamic range, the CF181D can show deeper blacks and whiter whites. Typically in scenes like this, the CF181D has more picture depth. Overall, with an HD source, we prefer the image quality of the CF181D over the 8500UB for this type of scene, and we prefer the 8500UB when a lot of black is present in the image.

The Epson 8500UB has a clear advantage over the CF181D with standard definition. We fed both units a 480i signal from our Oppo BDP-83 Blu-ray player to see what they would do with a signal in native format. The opening scenes in Get Shorty were rendered with better contrast and black level on the 8500UB. Dark scenes that look somewhat muddy on the CF181D are better defined with more solid blacks and greater shadow detail. Beyond this, the 8500UB had a smoother, more filmlike essence to the image. The 8500 simply has a decided advantage across the board with standard DVD source material.

Both models have frame interpolation. Both of them work equally well with 60p video material. For 24p movies, the 8500UB works perfectly well, and the CF181D does not work well at all, at least on our pre-production sample. It is possible that LG may fix this prior to releasing the production units.

Both units have long range manual zoom/focus lenses, and both have manual vertical lens shift. The 8500UB has horizontal shift, while the CF181D does not. Neither model has an anamorphic stretch mode to accommodate and A-lens. Both projectors come with a standard two-year warranty. Click here for a spec comparison of the two models.

LG Electronics is coming to market with a formidable 1080p offering that we consider to be highly competitive. Its brightness in Cinema mode is unbeatable. In most average scenes with HD sources, its picture quality is as good as it gets in this price range, especially in terms of apparent sharpness and three-dimensionality. With HD material, its weakness in black level only shows up when the scene is black or very dark, but for many users this will be a limitation that is easy to overlook. With standard DVDs, the black level limitations are more apparent. So for those who plan to watch a lot of SD DVDs from their library, the CF181D might not be the best choice.

At the moment, based on the evaluation of a preproduction unit, we see problems with the frame interpolation on 24p material that we suspect LG may get squared away in production models, but at the moment it is an open question. Nevertheless, several competing 1080p projectors under $3,000 have no frame interpolation at all, so the fact that the CF181D has it working beautifully on 60p HD source material is a benefit.

When all is said and done, the LG CF181D is a pleasant surprise that we were not anticipating. For Blu-ray HD sources in particular, this projector is a genuine pleasure to watch. Its vibrant, natural and extremely clear image can often surpass that of the competition. If you intend to watch primarily HD/Blu-ray material, and you need a lot of light for a very large screen, we are confident that you will love the picture you get from the CF181D.

For more detailed specifications and connections, check out our LG CF181D projector page.