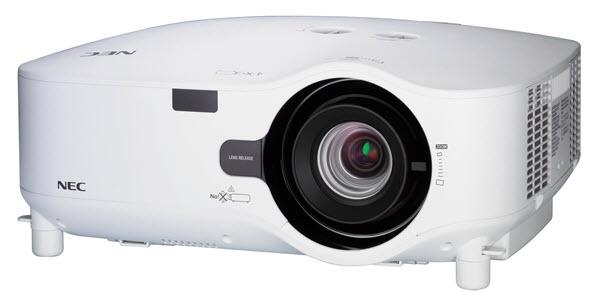 The NEC NP2200 is a real contender for university classroom and conference room projection. Rated at 4,200 ANSI lumens, it has three computer and four video inputs and offers replaceable lens options that run the gamut from short-throw to a 7:1 zoom. This projector is no lightweight at 16.3 pounds, but you get a lot of performance for the official street price of $2,399. Topped off with solid audio performance from its 10-watt speakers, the NP2200 puts up bright, natural images from spreadsheets to photos and DVD movies, and does it more quietly than you might expect for such a bright projector.

When it comes to medium-size venues with larger than average screens, brightness is what you look for first in a projector, and the NP2200 delivers. Its 300-watt lamp delivers a lot of light to the screen, and the image quality is impressive. The full-size remote control has direct control of functions like mouse control (with an accessory infrared receiver) and pan and zoom.

The LCD light engine and lens system is well designed, and image clarity is excellent. The standard lens is manual zoom and focus, with a 1.33:1 zoom range, and it has both vertical and horizontal lens shift to simplify setup.

While native resolution is XGA (1024 x 768), the NP2200 accepts PC data from VGA to UXGA and video formats from 480i to 1080i. Non-native resolutions are scaled seamlessly with proprietary algorithms, and even fine lines and small typefaces are sharp-edged.

Network control and monitoring is accomplished via the N2200's RJ-45 connector with network software included on a CD-ROM. Projector control by a computer is done via the projector's D-sub 9-pin connector, and software for the Virtual Remote Tool is provided.

Brightness: On our test unit, we measured a healthy 3,710 ANSI lumens in its precalibrated High-Bright mode. Movie and sRGB modes both put up about 2,730 lumens while Video and Graphic modes delivered 2,050 and 2,350 lumens, respectively. These were measured with the lens at wide angle, and the lamp on full power. Taking the zoom lens to its maximum telephoto position drops High-Bright to 3,190 lumens. That is a 14% reduction, which is very little loss for a 1.33x zoom lens. Eco mode lowered brightness by only 15% which is not much of a price to pay for a 50% increase in lamp life.

Uniformity: The NP2200's light engine and optical system deliver an exceptionally uniform white field. At 89%, this projector's uniformity ranks near the top of the list. It's nearly impossible to detect a variation in brightness anywhere in the image.

Image Sharpness: Edge-to-edge sharpness is excellent with no de-focusing at any of the image extremes and no detectable chromatic aberration. Various computer resolutions are mapped smoothly by NEC's AccuBlend™ algorithm. The NP2200 also automatically detects computer data phase and sync information and correctly sets the projector to match so data images look crisp.

Lens Shift: Vertical and horizontal lens shift are very handy if the installation of a ceiling mount is a little off its mark, and the NP2200 has both. It also makes a temporary conference room setup a breeze since minor image positioning errors can be corrected without moving the projector or the screen. However, the NP2200 doesn't quite meet its vertical shift specification of Â± 50% of the image height. It measured Â± 32% of image height on our review unit, but that is still enough vertical adjustment range for many installation requirements.

Image Size and Position: Placing the projector as close as 40" from the screen, it will throw a 30" image, and from 68.5' away at full telephoto that image size increases to 500". With vertical lens shift at its upper limit, the bottom of the screen image is at lens height. If you need to raise the image, you can extend the two front feet and lock them in place and make fine adjustments by turning them. Vertical keystone correction of Â± 30Â° is available if needed.

Remote and Menus: With 36 buttons, you might think that the full-size remote is crowded, but the layout is very functional. The buttons are relatively large and some are color-coded, so navigating is easy. The on-screen menus are layered, so exiting with a single button push is uncommon, but the menus are intuitive and it doesn't take long to learn what's where. The remote's AV Mute (blank image and mute audio) and Freeze (freeze image) functions are not indicated on-screen, so if connections are correct but the image is missing or frozen, check the status of these two functions.

Connections: The NP2200 has a full complement of input connections with the exception of HDMI, though an HDMI to DVI adapter can compensate for that omission. Computers can be connected via VGA, DVI-D with HDCP, or five BNC connectors, and video is accommodated by composite and s-video connectors. Component video is accepted via the VGA and BNC connectors. There are separate audio input mini-jacks or RCA connectors for each of the five input modes, and an audio output for external amplification if needed. Note that neither saturation nor tint can be adjusted in the Picture menu for the DVI-D or VGA inputs although RGB corrections can be made via the Detail Settings menu.

Preset modes: The six preset modes vary the image brightness as noted earlier, but image adjustments for saturation and hue in a preset can only be made when connecting composite, s-video, and component video sources. Presentation and Graphic modes have very little color bias, but High-Bright tends toward green and Movie and sRGB have a slightly reddish tint. The brightness and contrast settings for each mode are close to optimal, but reducing each may improve image quality.

Maintenance: Like all LCD projectors, there is an air filter that needs attention periodically. A brief message appears on-screen when the filter needs cleaning, and it's a simple matter of vacuuming over the filter cover. If damaged, the sponge-like filter can be replaced in less than a minute.

Optional Lenses: NEC offers a series of optional lenses for the NP2200. They range from a 0.8:1 short-throw lens for front-of-the-room setups to a series of four manual zoom ranges. Each lens lists for $1,999 except for the highest zoom ratio of 7:1 which goes for $2,399. Lens change is quick and easy . . . push a button, twist the lens housing, and it's out.

Warranty & Lamp Life: NEC provides a 3-year parts and labor warranty for the projector and also covers the lamp for 500 hours of operation or 12 months, whichever comes first. The lamp has a relatively short life of 2,000 hours in normal mode, but Eco mode stretches that to 3,000 hours and reduces fan noise as well. The lamp is accessed on the side of the projector, so replacement in ceiling mounts is easier.

Image Quality: The PC images that the NP2200 delivers are as good as any we've seen in this class of projector. Colors are well-balanced, lines and graphics are sharp and detailed, and uniformity in nearly flawless. It's not often that a quality data projector also puts up memorable video images, but that's the case with this projector. The Movie mode is a little bright and you may want to drop the brightness by using Eco mode, but skin tones are natural and the highlights and blacks are better defined than you might expect from a projector with a 600:1 contrast ratio. If you really want to optimize the video image, you can dip into the Detail Settings menu, choose one of six color temperatures, and adjust contrast and brightness of red, green, and blue.

Fan Noise and Heat: One of the advantages of a physically larger projector is its bigger fan which moves air with larger blades that make less noise. A larger exhaust opening also means lower air velocity which accounts for the minimal heat flow you can detect just a couple of feet from the NP2200. That may not mean much for a ceiling-mount application, but if it is on a conference room table or a portable cart, your audience will appreciate it.

Audio Quality: Ten watts may not seem like much, but the NP2200 speakers deliver all the sound most medium-size rooms will need. Not only is the sound not tinny or buzzy at high volume settings, but there are controls for bass, treble, and balance to fit the audio output to the room characteristics.

Ceiling or Tabletop Operation: For tabletop projection, the maximum vertical lens shift leaves the centerline of the lens intersecting the bottom edge of the image. Thus the image may not hit your screen unless your tilt the projector upward and use keystone correction. Conversely, when flush ceiling mounted, you may need to angle the projector downward to hit the screen, or use a drop tube to bring the projector down closer to the level of the screen. In essence, the lens shift feature is most useful when the projector is placed on a rear shelf at roughly the same height as the center of the screen. Check your room dimensions and screen position in advance to make sure that you can position the image effectively.

Optional Lens Cost: While it's convenient that optional long- and short-throw lenses are available, they cost nearly as much as the projector.

On-Screen Menu: There's no problem with menu contents or navigation, it's just that the menu takes up a fair amount of the center of the image. This may make image adjustments tedious, and the position of the menu on the image cannot be changed.

Remote Control: Despite some thoughtful button grouping and color-coding, a backlight for the remote would help with menu selection in darkened rooms.

In the category of bright projectors with good data and video quality, the NEC NP2200 is a standout. It is relatively large and heavy, so it's not designed for portable applications. But for a high impact visual message in a medium-size room, this is an excellent choice. Lens controls and connection options make temporary setup or a permanent installation easy, and the audio and video quality will get your audience's full attention. At $2,399 the NP2200 is a winner.

For more detailed specifications and connections, check out our NEC NP2200 projector page.