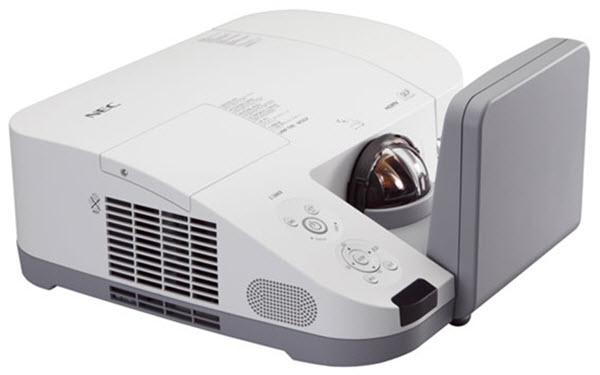 As with most ultra short throw projectors, the actual projection distance is greater than the distance from the front of the projector, because the image is projected from near the back, with the lens facing away from the screen and bouncing the image off a mirror. The actual throw distance, measured from the mirror, was about 19" in our tests. That also happens to be roughly the minimum distance in NEC's stated range of 1.6 to 2.1 feet (19.5" to 27.7") for an image size of 77" to 100" diagonally.

Bright enough for well lit rooms. We measured the NP-U310W at 2910 lumens in its brightest mode ("High-Bright"). That's just a touch below its 3100 lumen rating, and easily bright enough to stand up to typical office or classroom lighting with the 76" diagonal image we used. Eco mode drops the brightness by about 20%, to 2332 lumens in high brightness mode and raises the rated lifetime for the lamp by 20%, bumping it up from 2500 hours to 3000.

Note too that we measured the Presentation preset, which is the factory default setting, at 1748 lumens. Various other presets -- from a low of 662 lumens to a high of 1812 lumens by our measurements -- offer a wide range of brightness suitable for different levels of ambient light.

Good data image quality. Because the High-Bright mode is so much brighter than the Presentation mode -- enough to see a significant difference when you switch between the two -- we ran the data image quality tests primarily in the High Bright mode. Given that the brightest mode for projectors often has problems with color-balance and other color-related tests, our intention was to drop back to Presentation mode if we ran into a problem, so we could see if image quality improved. As it turned out, that wasn't necessary.

Image quality for data images is just short of excellent even in High-Bright mode, making it more than good enough for any business or classroom use. Some colors, particularly red, were a little dark (in terms of a hue-saturation-brightness color model), but were suitably saturated and eye catching.

A quick comparison between the two modes showed that colors in general and reds in particular were brighter and more vibrant in Presentation mode, but the difference is between good and better, not bad and good. Neither mode had any issues with color balance, which is generally far more important to data image quality. If you need the color to be as vibrant and eye catching as possible, Presentation mode is the preferred choice, but in most cases the High-Bright mode will serve just as well.

The NP-U310W did particularly well with text, with both black on white and white on black text crisp and highly readable down to the smallest sizes we test with, which is smaller than you're likely to use. The auto-sync feature also did a particularly good job, giving us a notably stable image with an analog connection, with virtually no pixel jitter even on screens that tend to bring out the problem, and no manual adjustments needed.

Above par video quality for a data projector. The video image quality (with the projector automatically switching to Movie mode) is well short of what you'd want from a home theater projector, but better than par for a data projector. I saw motion artifacts in test clips in the form of slight tearing on straight edges, along with some posterization (colors changing suddenly where they should gradually) and a minor loss of shadow detail, but in each case, only in scenes that tend to show these problems. Most data projectors do far worse, particularly with shadow detail.

Good connectivity. The NP-U310W lacks a USB port for reading files from a USB key and it lacks a connector for remote mouse control, but it offers all the connectors you're likely to need for both data and video images as well as audio. NEC also sells a wireless remote mouse control option for $45.

The projector's side panel includes an HDMI port for either a computer or video source, two VGA inputs for computers or component video, a VGA pass-through port for a monitor, and both a composite video and S-video port.

Audio ports in addition to HDMI, include two stereo miniplug inputs, each paired with one of the VGA ports, and a set of stereo RCA phono plug inputs shared by the composite and S-video ports. If you have more than one image source, the paired audio ports let you automatically switch the audio to the right source when you switch image sources. A stereo miniplug output lets you connect to an external sound system.

One useful extra is that the projector also works with the downloadable NEC Display Solutions Virtual Remote Tool utility. The utility, which runs in 32-bit Windows 7, Vista, and XP, lets you turn the projector on and off and otherwise control it from your computer over a VGA connection, as well as the more typical LAN connection.

Good quality audio. The audio system on the NP-U310W offers good enough sound quality to be usable and high enough volume with its 10 watt mono speaker for a small classroom or small to mid size conference room. If you need stereo or enough volume for a larger room, you can use the audio output to plug into an external sound system and still switch the audio automatically when you change image sources.

Minor Issue with Brightness Uniformity. Maintaining uniform brightness across the screen is a challenge for ultra short throw projectors. In fact, if you judge the NP-U310W strictly by its 46% brightness variance score -- a ratio of more than 2 to 1 between the brightest and least bright measurements -- you'd have to conclude that it has a serious problem on this score.

The saving grace, however, is that the distance between the brightest and least bright areas is far enough, and the brightness changes gradually enough, so that it's not really a problem. Break up the image -- whether with text, the icons on a Windows desktop, or other details -- and the difference becomes hard to see. Many people will never notice it, and few, if any, are likely to find it bothersome.

Rainbow artifacts for Video. Single-chip DLP projectors can have a problem with rainbow artifacts, the tendency of light areas to break up into little red, green, and blue rainbows when you shift your gaze or an object moves on screen. The NP-U310W does an exceptional job of not showing these artifacts in data screens, so that even those who are sensitive to them should rarely see them. It also shows them less frequently in video than many other DLP projectors. However the artifacts showed up often enough in my video tests so that anyone who's sensitive to the effect would almost certainly notice it, and might consider it annoying for long sessions.

Limited 3D. As with many newer DLP projectors, the NP-U310W is 3D ready, but as with most inexpensive DLP-based 3D projectors today the 3D is limited. It is not compatible with Blu-ray or broadcast 3D signals except via an external converter. Arguably the most important issue is that you'll need enough pairs of DLP-Link glasses (currently $70 or more each) for your audience, and each set of glasses uses a battery that's subject to running down. In short, the 3D feature may help future-proof the projector, but you may not ever take advantage of it.

The NP-U310W's constellation of features, particularly its bright image combined with near-excellent data image quality, makes it an attractive choice for anyone who needs an ultra short throw projector with 1280x800 native resolution. The audio quality, connectivity, and above par video quality help make it even more attractive, and a near bargain for the price.

For more detailed specifications and connections, check out our NEC U310W projector page.

Comments (2) Post a Comment
Brandon Posted Nov 27, 2011 9:56 PM PST
Audio out from HDMI is not supported. So you can hear it from the built in speaker, but not from attached speakers... Buyer beware.
Bun707 Posted Jun 1, 2012 3:33 PM PST
This is a great substitute projector for SMART Boards and the like. The mounting system is very fast to dial in, actually much faster than SMART's system.

The comment above about audio out via HDMI was correct for the first couple batches but since serial number 15xx in mid-2011, NEC corrected this problem in firmware. Now, audio from HDMI is routed to the audio out jack so you can hook up a larger amp or powered speakers in your room.