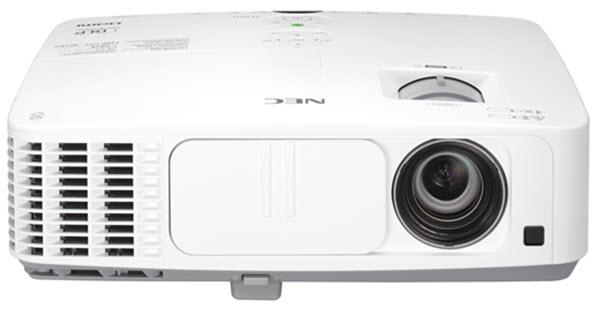 A few projectors are particularly well suited for permanent installations, and NEC's PE401H is a prime contender. The projector is not light or compact, but it handles a wide variety of inputs, and its brightness and resolution produce some stunning data and video images for its price class. The PE401H is a 4,000-lumen HDTV projector (1920x1080 native mode resolution) with a street price of just under $2,000. It weighs about ten pounds and has a 13.8"x11.1" footprint, so it is probably best suited for ceiling mounting although it can be used in desktop and cart environments if space is available and the cart is sturdy.

Another clue to its intended usage is its detachable cable cover which you generally see in ceiling-mount installations. The PE401H sports dual 8-watt internal speakers that can deliver enough audio volume for medium-sized rooms, so small churches, photo clubs, and hotel meeting rooms can probably get away without the need for external amplification. To cap things off, the PE401H has both Web and computer control interface connectors, so it functions nicely as a networked projector.

When the PE401H comes out of its box, you immediately notice the extent and clarity of its rear panel connections. All connectors are clearly labeled, and you will find video, computer and dual HDMI inputs along with LAN and remote control connectors. Once connections are completed, the PE401H puts up a very bright image that has no trouble competing with ambient light. Fan noise is modest and of low to moderate frequency, so audiences will not be distracted in most circumstances.

It is unusual for a projector to produce superior data and video images, but the PE401H does both. Spreadsheets and text documents are crisp and well focused from edge-to-edge, and the PE401H's Sharpness control is very effective in defining small characters even at full keystone correction. Photos are lifelike, and color balance is excellent in sRGB picture mode.

Video images are excellent after a few tweaks to the image settings. The Picture Mode presets are close to optimum with respect to color bias and saturation, but the best images are achieved by using the PE401H's two User modes where image settings can be fine-tuned. On our sample PE401H, a slight increase in contrast with a concurrent decrease in brightness produced an image with well-balanced highlights and defined shadows. Shifting hue slightly away from red rendered excellent skin tones, and decreasing the Sharpness setting gave the image a pleasing film-like quality.

One final observation. If the PE401H is not permanently mounted, it makes a terrific projector for weekend home use for NFL and college football parties, March Madness, and watching Tiger seek the ever-elusive win of his next major. The image is detailed and bright even in living rooms with high ambient light.

There are no surprises when setting up the PE401H. Zoom and focus controls are smooth and positive, and the remote control is laid out efficiently with clearly marked buttons. There is no horizontal keystone correction so you have to make sure the projector is facing the screen squarely, but vertical keystone correction may be adjusted over a Â±40Â° range. The only unusual effect is the interaction between the User 1 settings and the Picture Modes when changes are attempted in Picture Mode settings. Any attempts to change Picture Mode settings are reflected in the User 1 settings, so if you want to make sure your favorite settings are preserved, choose the User 2 menu before you make your selections.

One handy feature of the PE401H is its unusually long zoom range of 1.7:1. This is helpful when doing installations where distance from the projector to the screen may be dictated by room dimensions and fixtures. With the flexibility of a 1.7:1 zoom, you can achieve the same image size from a wide range of projection distances.

Heat Exhaust - The significant heat being generated by the 330W lamp is exhausted from the PE401H through grates on the right and front sides of the projector. Generally, the audience members will be seated far enough from the projector that heat flow will not be an issue, and fan noise is relatively low for a projector of this size that puts out this much light.

Image Settings -NEC provides one of the most comprehensive image menus where individual color gain and bias can be adjusted. This menu is not for the faint of heart, but if you have experience in calibrating displays, you have all the flexibility you will need to fine-tune the image.

Connectivity - Virtually all standard sources can be accommodated by the PE401H. Computers, composite/component/S-video, and audio in and out all have individual connections, and there are dual inputs to simultaneously connect two HDMI sources. As is common, the single VGA connector serves both computer and component video sources so if one is in use, the other cannot be accommodated. There is also a separate monitor output.

Remote Monitoring and Control - NEC makes application software available on their Web site to set up remote monitoring and control of the PE401H. After installing the Virtual Remote software, a virtual remote is displayed on your computer. Similarly, NEC's PC Control Utility can be downloaded to perform monitoring tasks that are common in LAN environments. This software is specific to PC and does not function on Macs.

Lamp Life - Like most bright presentation projectors, the PE401H has a lamp with a limited life. NEC says you can expect 2,500 hours in normal mode, but Eco mode stretches that to 3,300 hours with a corresponding reduction in fan noise. A replacement lamp from NEC has a list price of $349.

Maintenance - Like most DLP projectors, there are no air filters to be replaced, but it is recommended that the intake and exhaust ports be vacuumed occasionally to remove dust or lint that might collect near the DLP chip. Lamps are replaced through the top of the PE401H, so even ceiling mounted units are easy to service.

Warranty - NEC offers a three-year warranty on the PE401H. The lamp is warranted for 500 hours of operation or one year, whichever comes first.

Brightness and Uniformity -Our test model of the PE401H delivered 3,975 ANSI lumens in High-Bright, Presentation, and Blackboard modes, essentially matching its 4,000-lumen specification. The other Picture Modes performed as follows: Video and Movie - 2,880 lumens, and sRGB - 1,210 lumens. Brightness uniformity was 83% with the bottom of the image slightly brighter and with no discernible hot spots. Eco mode reduced brightness by about 28% in all modes. Unless maximum brightness is a requirement, Eco mode will provide a bright image with greatly reduced fan noise.

Image Size and Displacement - For a 150" diagonal image, the PE401H can be placed anywhere from 17'5" to 29'8" from the screen thanks to its large 1.7:1 zoom ratio. At that image size, the bottom of the image is offset about 12" above the centerline of the lens, and this displacement is good for both ceiling and tabletop mounting although it may not be ideal for shelf mounting at the rear of a room since there is no lens shift on the PE401H.

Frame delay - Frame delay was only two frames (32 msec) which is about as fast as it gets for projectors of this class. That makes for good gaming performance and establishes the PE401H as a good contender for home video projection.

Menu Position and Opacity - Unfortunately, the on-screen menu cannot be moved from its location in the center of the image, nor can its opacity be modified. This is mildly inconvenient when initially setting up the projector, but once optimum settings have been determined, it ceases to be an issue.

Menu Layering - Because the PE401H has so many setting options, the on-screen menu is necessarily layered so that menus do not become too cumbersome. This limitation causes a fair amount of button pushing during initial setup, but it is not an issue once the projector is up and running.

User 1 Settings - As described earlier, your User 1 personal settings are going to be modified if another user tries to change any Picture Mode settings.

If you have a good-sized room that needs a bright projector with high resolution, the NEC PE401H is a prime candidate. At 4,000 lumens with HDTV native resolution, this projector puts up outstanding data and video images at a modest price. Because of its size and weight, the PE401H is probably best mounted in a permanent location, but it can serve as a luggable projector when needed. It also makes a nice home video projector with more than adequate brightness even in moderate ambient light. Smooth, detailed, brightly lit images are the PE401H's hallmark, and it earns our highest rating for its performance.

For more detailed specifications and connections, check out our NEC PE401H projector page.

Comments (5) Post a Comment
Terry Posted Dec 18, 2013 11:08 PM PST
Seems like this projector ticks a lot of marks, does it qualify for any of the Top 10 spots on this website?
Terry Posted Dec 19, 2013 12:06 AM PST
Another thing, I posted a similar comment over at ProjectorReviews, but why are the lumens measured for this projector between their site and this one so different?

That's a CRAZY difference for Presentation and Movie. Other differences are minor, but still... Why such a big difference in measurements between sites?

Your numbers make this projector look way more usable in other modes than their website would lead you to believe.
Bill Livolsi Posted Dec 19, 2013 8:58 AM PST
Terry,

There could be a number of things happening that are causing a difference in measured light output. First of all, no two projectors will be exactly alike, and manufacturing tolerances can account for significant differences even in two units of the same projector model.

This projector has a 1.7:1 zoom, and while we always measure the projector at the widest angle lens setting, ProjectorReviews takes their readings at the lens's midpoint. Since the midpoint of the zoom isn't a set location (you have to eyeball it, more or less), it's possible that their numbers vary due to zoom changes between readings.

There are also differences in light meters, and sometimes these differences are exaggerated by where the user holds the meter while taking the readings. There could also be an error in someone's readings, but without re-testing both projectors there's no way to tell who, if anyone, is wrong.

Then there are differences in settings. Since the PE401H is a DLP projector, it is possible to change white light output significantly by using BrilliantColor. If one projector had BC enabled and the other did not, that would easily account for a 1,000 lumen difference.

Also, as a minor correction: Projector Reviews actually measured 4685 lumens in Bright mode at full wide zoom, compared to our reading of 3975. So the two differences you pointed out are far from the only ones. If you corrected all of their numbers for zoom lens light reduction, none of the image modes match up correctly. Because of the difference in testing methods, it's not a straight-up comparison.
Terry Posted Dec 19, 2013 11:08 AM PST
I had initially typed 4685 as their reading, but then I grabbed the 4013 because that was the reading they took at midzoom and since all my other numbers I quoted from them were from their midzoom, I wanted it to match. ;)

But, yeah, I think the biggest thing is probably the lens zoom. You guys measuring full wide vs their mid zoom. I guess the light changes drastically on this projector due to that reason. (More so than most.)
Todd Posted Apr 1, 2014 4:02 PM PST
Why is there no Projection Calculator info for this projector?