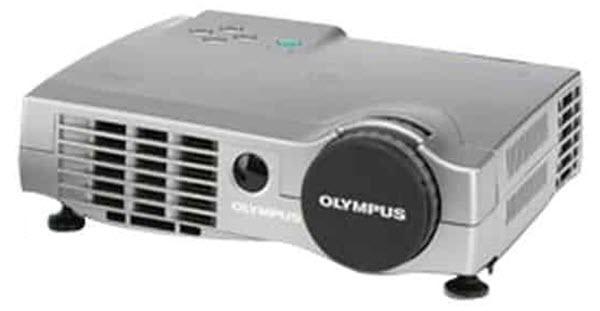 The portable projector market is a tough market with 68 projector manufacturers and suppliers competing for mind share and shelf space. It is not easy for a new company to join this club unless it has an existing distribution channel, a differentiated offering, a lower cost to market, and/or an entrepreneurial spirit.

In the company profile, Olympus President Tsuyoshi Kikukawa states the need to "act thoughtfully but boldly and fast" through "creative innovation" - a clear attempt to kindle the Olympus entrepreneurial spirit and run with new ideas.

Their targeted channel is the digital camera market. As one of the top 5 suppliers in the digital camera world, it's a channel they know well. To move "boldly and fast", Olympus partnered with PLUS, one of the premier manufacturers of highly mobile projectors. This eliminated R&D cost and reduced the time to market.

Olympus' first projector offering is a very small, light, XGA (1024 x 768) highly mobile projector that is not much larger than a digital

camera. Priced at $2,495 and dubbed the VP-1, aka PLUS V-1100Z, this projector utilizes some of Olympus' lens technology and Texas Instruments' DDR (double data rate) DLP display using a 4 segment color wheel (red, green, blue, white) spinning at 2 revolutions per frame (2x). Weighing in at 2.4 pounds (1.1 kilos), this little jewel comes with a double bag carrying case - one for cables and one for the projector. It's about an inch wider and longer than a CD case and less than 2 inches high. Capable of delivering 1000 ANSI lumens of light output and 2000:1 contrast, the VP-1 projector is one of 21 sub-3-pound XGA projectors in the market as of this writing.

The VP-1 was introduced at the Consumer Electronics Show in January in Las Vegas along with the P-10 compact printer. Both products are part of the total imaging solution that Olympus is offering digital camera users. The initial market thrust is the business user and an offering for the home entertainment market will follow.

Olympus estimates that the North American market will reach 1.4 million units by 2007 and 4 million units worldwide. Their near-term goal is to achieve a 10% market share in North America and expand to Asia and Europe if circumstances are favorable. Olympus is forecasting 5,000 ($6 million) projectors to be shipped in 2004 and 100,000 projectors in 2007.

The VP-1 includes a 1.2:1 zoom lens capable of throwing a 100 inch (254 cm) diagonal image from a distance of 12.8 to 15.4 feet (3.91 to 4.69 m). This is a comfortable size for a room that is dimly lit. Considerably larger image sizes are possible, but you'll want to have a darkened room to go much larger. As a rule of thumb, allow 20 lumens per square foot of image size in a dark room and increase that number as the ambient light increases.

Manual horizontal and vertical keystone correction are included and allow you to place the projector to the side, above or below the perpendicular to the screen giving you additional freedom on where the projector can be placed in a room. Corner to corner focus of the projected image is excellent.

Since the world is still largely analog, the cable that ships with the VP-1, is the industry standard RGB. The VP-1 includes a short DVI-I to RGB cable and a standard RGB to RGB cable as an extention. If you want to use digital video or digital data, and we highly recommend it, you'll need to buy an optional DVI to DVI cable.

Since the intended audience of the Olympus VP-1 is digital camera enthusiasts, we ran a series of digital camera shots, graphics, and computer data as well as video using a Dell computer, the Bravo D1 analog and digital video DVD player, and a DishNetwork satellite receiver. We used both a Draper Road Warrior screen and a Stewart split- screen of half gray and half white.

High contrast projectors generally don't need the additional contrast enhancement that gray screens provide; however, the VP-1 is a relatively low lumen projector making it difficult to compete with ambient light. In a dark or dimmed room the white screens bring out the whites allowing the image to come alive, but when the room is well lit, the gray screen holds the image together better by maintaining better contrast and image viewability.

Composite Video/S-Video - We used DVD video and satellite television to test NTSC and PAL and found the images to be very good although they suffer from the jagged edges associated with interlaced video that are most apparent when an image is panned across empty seats in a stadium or fences offset from the vertical. Color saturation and flesh tones were very good and we found the best settings with adjustments to gamma (Real), color temperature (Low), and white (High). The higher white setting gives a brighter image and lower settings would be fine in a dark room.

Component Video - We used an RGB to component video extension cable to generate component video images from DVD and satellite television. Image quality improved with RGB and the jagged edges were all but eliminated with this progressive video source. We found we could get excellent flesh tones and color rendering with the same settings as we used for composite and S-Video.

RGB - The Internet, data, graphic and photo images were excellent due to a balanced gray scale, and good color temperature and gamma control. For data we could optimize for light output and for photos or Internet browsing we could adjust as needed to get good flesh tones and a softer image.

Digital Images/Video/Data - If you every wondered about the quality of digital input, wonder no more. You cannot get a cleaner image. Vertical banding and pixel jitter do not exist. Adjustments to color saturation, tint and sharpness are are a thing of the past. About all you'll want to do is tune the color temperature, gamma correction and the white level to your liking. The pristine images of digital input are as good as it gets with the Olympus VP-1 and DVI projectors in general.

h2>Conclusion The Olympus VP-1 did an excellent job on a wide range of inputs and source material. We especially liked the digital images as they are the closest you can get to the quality of the source material and an ideal feature for the digital photographer. The projector does not have a tripod mount, which we thought would be a natural for a projector targeted at the digital camera audience.

Will Olympus and the VP-1 succeed? Only time will tell, but it will certainly give Olympus a first hand look at the projector market and the needs of digital camera customers. If the launch is successful, expect to see some "creative innovations" in their follow-on projectors in the coming years.

For more detailed specifications and connections, check out our Olympus VP-1 projector page.