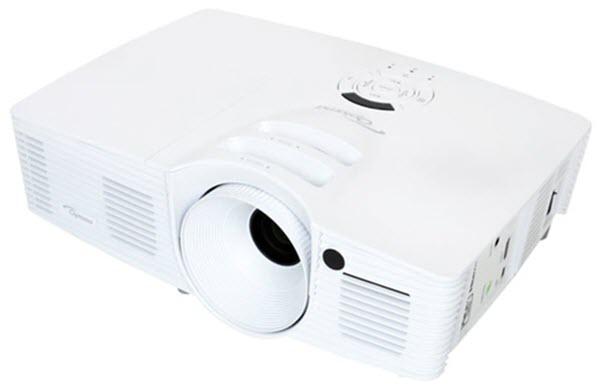 First time projector buyer. So far all has been absolutely easy to use and love the move from a 42" Sony Bravia to a 100" Electric screen. 30' HDMI cable to a Denon avr receiver.

My first projector, have read about many reviews thought it was very quite and the spec on 26 dB looked great. But it was far from the reality, the fan sound is ok i guess, but the color wheel (atleast i think it is) make some really nasty tones in most framerates except for 30 and 60 Hz. I recorded a test of this and uploaded it on soundcloud. https://soundcloud.com/fxeffekt/sets/optoma-hd26-fan-test The picture i have nothing to complain about, it looks great, even in a not complete dark room. And for the price maybe this is what you get.

Picture quality is OK. Easy to set up. But the noise from color wheel and fan is completely intolerably. Really poor acoustic design. I can not recommend this PJ if low noise is a mandatory requirement.

My last projector finally died so I purchased this Optoma HD26. I am already returning it. Having owned 2 previous <$1,000 DLP projectors, the HD26 is SUBSTANTIALLY louder, even in 'eco' mode which I could hear across the room. Having it above my head during viewing it is unacceptably loud, and having it in 'normal' mode is a jet engine of distraction. It also leaked a lot of light onto the ceiling which is also a distraction. Black levels were a poor grey, even after THX calibration. The nail in the coffin was the extreme rainbow effects. Again, I have owned 2 DLP projectors over the last 10 years and I rarely if ever saw rainbows, but with the HD26 there were rainbows all the time. I returned it for an Epson 2030 and while still not as quiet as my previous Vivitek DLP projector, it gives a much better picture, quieter, vibrant colors, ok black levels, and of course rainbow free picture.

I ordered the optoma HD26 to take the place my HC1500 based in part on the reviews on this site. The image out of the box seemed sharp and well balanced, however I had to return the projector based on two factors, excessive noise and light leakage. The latter issue was so bad that I could make a shadow against the wall 6-7 ft away. This projector is completely unsuitable for even a semi-darkened room. The color wheel and fan were also very noisy and distracting, much louder than my old HC1500.

Any Problems: Noise Light leakage thru the side vents.

I have had this projector for 2 weeks now, the image quality of the projector is excellent! It bright even for day use or with the lights on. (colours are little washed out though, as you would expect in bright rooms) The colour out of the box needs a little tweaking as out of the box skin tones can be a little red for my liking. Colours are vibrant and pop, the image projected is sharp and clear. I recommend this projector to anyone looking for a first time projector. Here are my calibration settings to help user get a staring point Display Mode:User Brightness:0 Contrast:3 Sharpness:9 Colour:9 Tint:2 Gamma:Film BrilliantColor:1 Dynamic Black:Off Colour Temperature:Warm Colour Settings:White - Red 0/Green 0/Blue 3 Red - Hue 0/Saturation -1/Gain -10, Green - H 10/S -2/G -3, Blue - H 10/S 0/G -22, Cyan - H 8/S -4/G -3, Magenta - H 19/S 4/G -16, Yellow - H 20/S -7/G 4 Colour Space:Auto Format:Native Lamp: Eco

I am using this projector for the past one month and no problems encountered yet, also the image quality is really amazing. you have to buy 3D glasses separately, and the 3D is amazing to view.