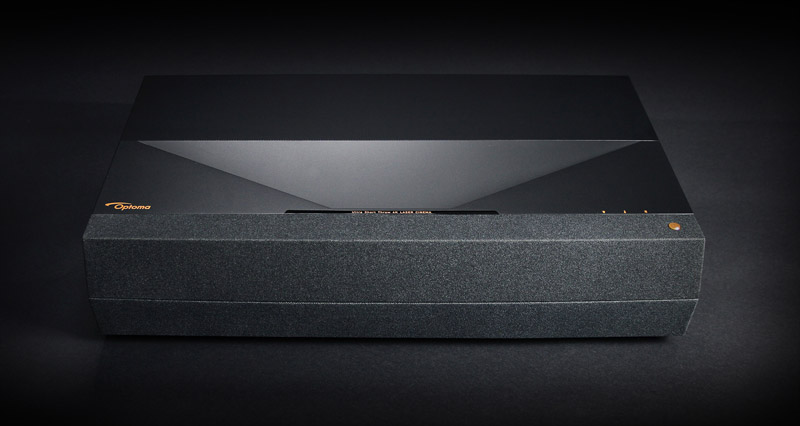 In what is surely its most anticipated product introduction of the year, Optoma is set to begin shipping its CinemaX P1 Smart 4K UHD Laser Cinema Projector.

Priced at $3,299 and available by mid-month, the P1 is an all-in-one entertainment system that combines a space-saving ultra-short throw projector, a premium soundbar designed by Optoma's sister audio company NuForce, and an integrated smart TV platform that facilitates both internet streaming and smarthome control.

By delivering a striking UHD image of up to 120 inches diagonal size and robust sound quality from the same easy-to-install projector, Optoma is hoping to convince TV purchasers to skip the 75-inch flat-panel in favor of a more cinematic, bigscreen experience. The company is one of several manufacturers embracing the nascent UST home theater market this year with new models designed to specifically address the performance requirements of consumer displays.

Measuring in at just 22 inches wide and rated for a bright 3,000 ANSI lumens from its lamp-free laser light engine and DLP XPR chip, the compact P1 is spec'd for image sizes from 85- to 120-inch diagonal. Its 0.25:1 fixed glass lens can throw a 120-inch image from approximately 26 inches away from the screen, or a 100-inch image from about 22 inches. Although the steep angle of projection can make initial setup challenging with any UST projector, Optoma has addressed this with a clever SmartFIT phone app that allows the phone's camera to identify the borders of the screen and then automatically snaps the image into place. The projector is compatible with the latest UHD-resolution HDR content and offers wide color gamut.

Optoma has also incorporated its latest Smart+ operating sytem in the P1, which facilitates Amazon Alexa and Google Assistant for projector voice control and smart home device control, as well as support of device and services automation through the IFTTT platform. Voice commands allow powering the projector up or down, control of volume and transport functions of streamed content, and more. Popular streaming services supported include Netflix, Amazon Prime, and Hulu. 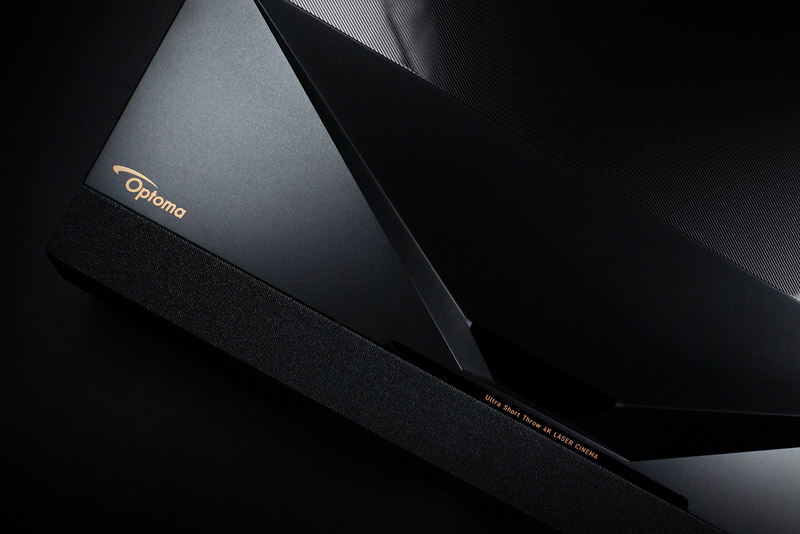 The integrated, 40-watt soundbar features a pair of full-range aluminum stereo drivers, as well as two supporting woofers, and uses isolated speaker enclosures to optimize the audio performance. Dolby Digital and Dolby Digital+ decoding is on board, and there's a dedicated subwoofer output to add extra bass support to the system.

The CinemaX P1 was first shown in January at CES 2019, then at InfoComm in June, where ProjectorCentral awarded it with our Best of Show honors. Here's a full list of features:

The Optoma CinemaX P1 is also sold outside of the United States of America as the Optoma UHZ65UST. Some specifications may be slightly different. Check with Optoma for complete specifications.

Comments (63) Post a Comment
Brian Gluck Posted Sep 7, 2019 5:42 AM PST
I've had a chance to play around with a pre-production unit of the P1 a couple times and was very impressed. This unit is a tremendous value at $3,299 and I expect it to be one of the hottest selling units this holiday season. While many may bypass the integrated audio speakers for their own dedicated sound system, those that plan on using it will be very pleasantly surprised by how well the audio sounds, especially in comparison to other 4k USTs at the higher price points. Looking forward to reading your review Rob!
Ronald Posted Sep 7, 2019 6:39 AM PST
When can we expect to read your review on this projector? I've been hearing about it for so long and am looking forward to reading your thoughts.
Phil W Posted Sep 7, 2019 8:27 AM PST
Hopefully there will be a comparison between LG Cinems beam UST and this Optoma P1.
Mike Posted Sep 7, 2019 8:39 AM PST
It does seem like a bargain to me, even though you have to buy a screen. Compared to the HiSense offering it will come in at less than half
David Rivera Posted Sep 7, 2019 2:47 PM PST
Rob, one very important feature on the P1 is that it will play 3D blu-rays. LG's own HU85LA does not play 3D. Unforgivable in my opinion at almost twice the price of the P1. I am eagerly awaiting your review of the P1.
Mike Posted Sep 7, 2019 8:47 PM PST
Did it lose HLG support? Not listed in the latest specs though it is on the Optoma website.
Jason Posted Sep 8, 2019 5:31 AM PST
good news is the price is affordable but the bad news are 1) the chip is .47 not .66 2) single laser + 8 color wheel not dual laser...
Aldo Texirt Posted Sep 8, 2019 1:54 PM PST
Please, inform us about the latency specially if a gaming mode exist. A low latency (<2 frames) is required not only for gaming but also for simulation quality (simulator sickness). Aldo
Wayne Posted Sep 8, 2019 6:48 PM PST
There is a gaming mode and I believe I read it was 55ms not very good sadly
Qaz Posted Sep 9, 2019 12:12 PM PST
This is looking great, sadly as we are nearing the end of 2019 there STILL isn't a true 4k chip out there at this price point for projectors when all other TVs manage true 4K for a fraction of the price. Pretty confusing at this point, projectors are really lagging behind.
Rob Sabin, Editor Posted Sep 9, 2019 12:27 PM PST
A few comments here in response:

- Point well taken regarding 3D here on the P1 but not on the LG. This is a bit of a missing on the otherwise very good LG (which we are evaluating now) and is perhaps an outgrowth of the company's primary experience and focus on flatpanels (where all TV makers have pretty much dropped 3D)and lack of familiarity with the projection market where there is still some demand. I'll mention it to LG's projector team when I see them at CEDIA this week -- maybe it's something they can add with firmware.

- Regarding HLG, it is indeed a feature of the P1.

- We will be testing both 4K and 1080p lag times for both the LG and P1 and will report these.

- Qaz, regarding your comments on lack of a lower-cost native 4K chip, I can't say what the issue is technically that's preventing this from happening, but I'll urge all readers, yet again, to not fixate on the fact that pixel-shifting is used to deliver all or even just some of the pixels in a UHD signal to the screen. Pixel shifting works -- it works in the XPR chips as well as with 1080p chips combined with enhancement circuitry, and anyone who denies themselves a UHD-compliant projector at this point because they can't get full native 4K cheaply enough clearly hasn't actually seen what pixel-shifting looks like on a decent projector with a good lens.
Steve Posted Sep 9, 2019 1:15 PM PST
We need a review of the 3 4K ust projectors.

Do you have recommendations for a reasonably priced screen to use with this? Something in the 2-300 range.
Doug Posted Nov 18, 2019 8:16 PM PST
Do they make ceiling mount for the Optoma P1 Cinemax?
Rob Sabin, Editor Posted Nov 19, 2019 5:33 AM PST
This projector cannot be ceiling mounted.
Ans Posted Dec 15, 2019 12:36 AM PST
It seems that since itâs launch the price has been increased by $500. It is now selling for $3799 on Amazon and Best Buy
birop Posted Dec 16, 2019 5:38 AM PST
Do you know something about the european release?
Rob Sabin, Editor Posted Dec 16, 2019 8:59 AM PST
Birop, we have no specific information about timing on a European release, but what I can tell you is that demand for this unit has been so high that even a review sample has been impossible to get since the P1's release in early fall.

Ans, I too have noticed that not just Best Buy and Amazon, but other authorized online sellers have also raised their price on this model by $500. That's unfortunate, and although I have not yet asked about the price hike, I'm going to assume for now that Optoma is following BenQ and perhaps others in bumping pricing on products coming out of Chinese factories due to the tariffs or anticipation of planned tariffs.
JJ Canon Posted Dec 18, 2019 10:05 PM PST
What screen would you recommend for this projector? I understand that a UST projector might need a particular screen type for maximum performance.

Thanks for the review!
Rob Sabin, Editor Posted Dec 19, 2019 6:58 AM PST
JJ, a dedicated UST screen is only necessary if you intend to use the projector in moderate to high ambient light; it will help reject light mainly from overhead and to some degree from the sides, and therefore help retain contrast if the plan is to use the image as you might to replace a traditional TV in all viewing conditions. Theoretically you do get some degree of image splash toward the ceiling with a conventional screen material, but I've not see this be an issue in my testing.

There are a few UST screens out there right now from Screen Innovations, Elite, XY Screens, a new outfit called USTScreens.com, and perhaps some others. These screens have a layered optical structure on the surface that takes light from below and bounces it back directly to the eyes of the viewer. The only one we've tested is the Elite, which is among the least expensive options to date. The review can be found here.
Vince Posted Feb 26, 2020 12:53 PM PST
Quick question why isn't there a review for this projector?

Thanks!
Rob Sabin, Editor Posted Apr 6, 2020 7:48 AM PST
Any day now,working actively on completing this.
Robert Posted Apr 14, 2020 3:58 AM PST
Hey Rob, I hate to be that guy... But, any update on that review? Also have you had a chance to take a look at the Epson LS500?
Rob Sabin, Editor Posted Apr 14, 2020 8:02 AM PST
Hi Robert. Working on this review right now and targeting next week for post. And I will share that general impressions are very good. Our VAVA review is in the can and also due shortly; it is unfortunately held up until they complete a firmware update they have asked me to wait for that addresses some color/image quality issues. Without going into too much detail, my general assessment at the moment is that while the VAVA represents high value at its $2,699 price, serious enthusiasts who value the best image quality and more polish and capabilities on the user interface and controls will be well advised to spend the extra $1,000 on the P1. The Epson remains trade-show vaporware at the moment and is scheduled for a 3rd quarter release as far as I know, so no one has gotten a look at it yet.
Robert Posted Apr 14, 2020 4:05 PM PST
Thanks Rob and I look forward to your review. Do you think you'll ever do a comparison between the P1 and the LG Cinebeam. The LG Cinebeam sounds amazing but is it really worth almost twice the price of the P1?

Thanks
Mike Posted May 4, 2020 2:26 AM PST
Is your up coming review of the P1 going to be the regular version, or the Pro that Optoma now has on the market (European version brought to the US)?

The pricepoint for even the most basic version of a UST ALR screen is well above the $200-$300 range. I would not recommend going screenless. I would not recommend using a conventional long-throw ALR screen. A conventional screen (non ALR) will work, but you will get a lot of light washing off the screen because of the projection angle, but that may vary depending on the gain of the screen.

The Epson LS500 is on par with the Viewsonic X1000; both are vaporware and thus irrelevant at present.