What the Optoma ZU506T is designed for:

Physical Attributes. With the projector on a table, all connectors are on the rear panel. The Kensington lock slot is at the bottom right. As seen from the back, intake vents are on the left side and exhaust vents are on the right. There is no security bar.

Brightness.The ZU506T-B test unit delivered 4,193 ANSI lumens, or 84% of its 5,000 ANSI lumen rating. The measurements in each color mode (HDMI input, lens at its widest angle position) are as follows:

Low Brightness Mode. The ZU506T doesn't have an Eco mode as such. Instead, it lets you adjust the power setting from 100% to 50% in increments of 5. Optoma says that where the specs refer to Eco mode—for fan noise for example—they mean the 50% setting. The measured brightness for each setting was roughly what you would expect from the percentage of power, with roughly being the key word. At 50%, for example, the brightness was reduced by 44%.

Zoom lens effect on Brightness. At its full telephoto setting, the ZU506T's 1.6x zoom lens reduced the measured brightness by 27%.

Presentation Optimized Lumens. For presentations that don't include photos or video, the test unit's Bright mode with default settings offered saturated, vibrant color for business graphics and presentations, at 4,193 ANSI lumens. As is common with the brightest modes in most projectors, colors were green-shifted, but the shift was immediately noticeable only with photorealistic images.

Lowering the Brilliant Color setting toned down the green bias in Bright mode and even eliminated it entirely at a setting of 1. However, it also lowered contrast significantly. If your presentations include photos or video clips, the better choice is Cinema mode. It has a slight blue bias, but most people find that far more acceptable than a green bias.

Video Optimized Lumens (SDR). The sRGB mode with default settings gives suitably neutral color for standard dynamic range (SDR) input, thanks largely to its default setting of 1 for Brilliant Color. The 1,466 lumens is bright enough for a 195-inch, 1.3-gain screen in a dark room or a 110-inch screen in moderate ambient light.

Contrast, Black Level, and Dimensionality. As with any high-brightness business projector, the ZU506T isn't designed for home use. Its black level, contrast, and sense of three dimensionality aren't in the same league as for similarly priced home theater projectors, however, they compare well with less expensive home theater models for SDR input, which is enough to make video and movies highly watchable.

4K UHD HDR. The ZU506T-B can accept 4K UHD HDR input, downsampling the 3840 x 2160 resolution to 1920 x 1080 while making use of the HDR mastering. In an A-B comparison, the projector held shadow detail in dark scenes much better with the HDR version of a movie than with the SDR version. However, colors in midtones were a bit brighter, more vibrant, and closer to what I know they should look like, when watching the SDR version.

When the ZU506T detects an HDR signal, it automatically switches to HDR color mode. Unlike most projectors with HDR, it will let you manually switch to any other color mode as well, but HDR delivered the most neutral and saturated color as well as and the best combination of contrast, three-dimensionality, and shadow detail. According to Optoma, the latest version of the firmware also offers four HDR settings to adjust the overall brightness of the image to best match the content. Our test unit lacked this option, and was permanently set to the equivalent of the middle of the range.

Full HD 3D. The ZU506T supports Full HD 3D with either DLP-Link or IR glasses. As with any projector with 3D, the 3D mode isn't as bright as any of the 2D modes. However, it's brighter compared with the 2D modes than most projectors can manage, which makes the ZU506T one of the brightest projectors for 3D that I've tested. I was comfortable watching a 90-inch diagonal 3D image on my 1.0-gain screen in moderate ambient light, even when I adjusted a lamp to point directly at the screen from about 10 feet away.

The projector also handled 3D well. I didn't see any crosstalk, and saw only minor 3D-related motion artifacts. A minor annoyance is that when the ZU506T detects a 3D signal, it asks if it's okay to switch to 3D before changing to 3D mode, and when you switch back to 2D input, you have to turn 3D off manually.

Brightness Uniformity. At its full wide angle setting, the ZU506T's brightness uniformity was 84%, which is barely enough of a difference to see on a solid white screen. At the full telephoto setting, it was 89%, which is too little variation to see any difference at all.

Rainbow Artifacts. As with any single-chip DLP projector, the ZU506T can show rainbow artifacts. I see these easily, and saw them a little more often with the ZU506T than with most current-generation models, but only when watching video and film. They rarely showed with static images. Our standard advice applies: If you see these artifacts easily or don't know if you do, buy the projector from a source that allows easy returns, so you can test it out for yourself.

Input lag. In my tests, the ZU506T was not able to negotiate a stable connection with my Bodnar meter, apparently timing out just as the image appeared on the screen for an instant and then switching to a "no signal" message. Optoma says it has measured the input lag at 49 ms.

On-board Audio. The sound from the two built-in 10-watt stereo speakers was usable though a little tinny. The audio was of high enough volume to fill a small to mid-size room. If you need higher volume, the 3.5mm audio out port lets you connect to an external audio system.

Fan Noise. Optoma rates the ZU506T at 36 dB in Normal mode and 30 dB in Eco mode (which equates to the 50% power setting). This is within the typical range for projectors in this brightness class and not likely to be an issue for the kind of applications the ZU506T is meant for.

Optoma recommends using High Altitude mode at 5,000 feet and above. I didn't hear any difference between 100% and 50% power settings with it on. In either case, it's loud enough that it can be intrusive from anywhere in a small to mid-size room. If you must use High Altitude mode, you'll probably want some form of acoustic isolation.

Setting up the Optoma ZU506T

Throw Distance. The ZU506T's 1.6x zoom offers substantial flexibility for positioning the projector. The range for a 150-inch diagonal image at 16:10 aspect ratio, for example, is roughly 14.8 to 23.75 feet. The Optoma ZU506T projection calculator will give you the range for the image size you want. 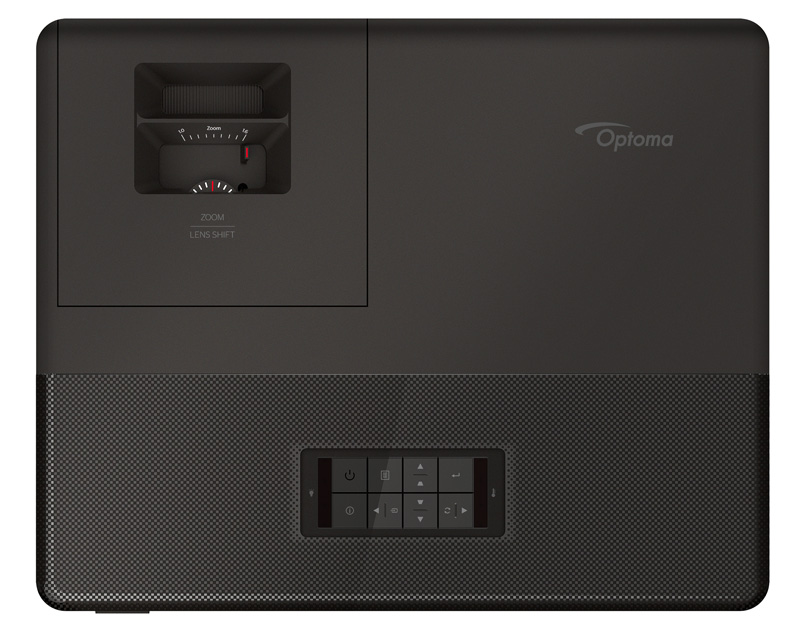 Mounting and Lens Shift. At 12.1 pounds, the ZU506T is one of the lightest 1920 x 1200 resolution laser projectors in its brightness class, making it easy to handle during setup. Optoma's data sheet gives the lens offset as 99%-107% of the image height, depending on the vertical lens shift setting. The test unit's measured offset and shift was consistent with the rating. With the projector sitting on a table, the bottom edge of the image is anywhere from 1% of the image height below the centerline of the lens to 7% above it.

This 8% vertical lens shift is enough to compensate for a small placement error without having to tilt the projector to match the image to the screen. But if you need to swivel the projector to point at the screen, or tilt it farther than the lens shift can compensate for, the ZU506T offers horizontal and vertical keystone correction of up to +/- 30 degrees. And for the kind of creative installation you might need in a retail display or museum exhibit, you can position the projector in any orientation over 360 degrees in any axis, and can use four-corner correction as well.

Our Take on the Optoma ZU506T

The Optoma ZU506T offers a nicely balanced set of features. The 1920 x 1200 native resolution is enough to make detailed graphics easily readable as well as show movies and video at 1080p. Contrast and color accuracy are good enough to make colors in business graphics eye-catching and make movies highly watchable. And the brightness is enough to deliver suitably big, bright images in venues ranging from large classrooms, conference rooms, and boardrooms to small auditoriums and houses of worship. In addition, the Dicom Sim mode makes it a good choice for medical presentations and education. And the support for HDR is a welcome addition for watching 4K UHD HDR content.

Beyond these basics, the ZU506T offers a trio of features that make it a strong contender for applications like digital signage and museum exhibits: a 20,000 to 30,000 hour life for the light source; 24/7/365, virtually maintenance-free operation; and the ability to mount the projector in any orientation for applications that require more creative positioning for the projector. This all adds up to making the Optoma ZU506T a more than attractive choice at its $2,799 street price.

For more detailed specifications and connections, check out our Optoma ZU506T-B projector page.