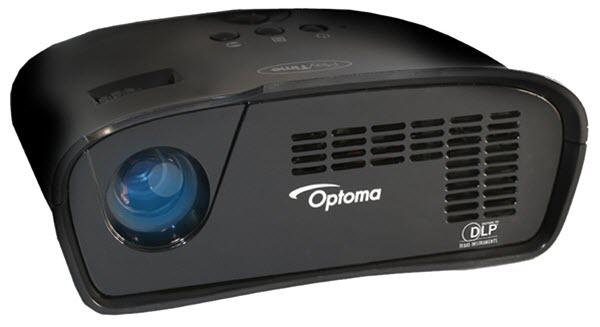 Don't misread this to mean that the PT105 is a toy. To the contrary, it's pretty impressive for the $199 street price. However, it's important to judge it in the right context.

Despite all of these similarities to pocket projectors, the PT105 offers a solid step up in image quality thanks to it's being big enough for a better lens than can fit in a pocket projector's tight dimensions. All this makes the PT105 an intriguing and inexpensive option for game playing, and to a lesser extent watching movies.

In our data tests, colors qualified as both bright and well saturated in terms of a hue-saturation-brightness color model. In addition, fine detail was suitably crisp for the resolution, and color text on color backgrounds was easy to read even in an assortment of color combinations, an issue that's particularly relevant for games.

Relatively good video image quality. The PT105's video quality puts most pocket projectors to shame, but that doesn't put it in the same class as a typical low-end home theater projector. The quality is best described as good enough to watch a full length movie, as long as you don't mind seeing rainbow artifacts (more on that later).

In our tests, the projector handled skin tones well, and it didn't show artifacts, posterization (shading changing suddenly where it should shade gradually), or any other glaring problems. It lost some shadow detail in poorly lit scenes that tend to cause that problem, but this shouldn't be an issue for games, where the programmed equivalent of lighting is tightly controlled.

I also saw a related issue, with some scenes coming across as a little dark overall, even though the image was bright enough for comfortable viewing. This is most likely related to the color depth of the projector's DLP-based engine, which TI says is 18 bits rather than full 24-bit color. The sense of darkness is what I would expect if the mapping were compressed in the darker shades, with multiple digital shades mapped to the same dark color and some colors mapped to darker shades than they ideally should be. Here again, this is less likely to be an issue for games, which tend to stay away from the dark shades where the compression in color mapping can be a problem.

The PT105 also offers good color balance in both video and standard modes, with suitably neutral grays. Bright mode showed a green tint at some gray levels, but color balance issues in a projector's brightest mode are common.

Good game image quality. Given the focus on game playing, the PT105's image quality for games is probably its most critical feature. As you might guess from the data and video image quality, I found the quality more than good enough to handle game images without serious problems.

Small and Portable. Weighing in at just 1.9 pounds and measuring 3.2" x 7.8" x 7.8" (HWD), the PT105 is small enough to take with you to a friend's house or to store away easily when you're not using it. However, Optoma doesn't supply even a soft cloth cover to protect it from scratches or dust. You may want to buy one both to protect it and to make sure the cables and external power block don't get separated from the projector.

Quick and easy setup. The PT105 is the sort of projector you're likely to be setting up every time you use it, which makes the easy setup an important plus. All you have to do is put it in place, point it at whatever you're using for a screen, plug in the power cord and cable, turn it on, and focus. The entire setup should take less than a minute.

Usable audio. The audio in most small projectors is hardly worth having, but the 1.5 watt speaker in the PT105 is better enough than average to make it worthwhile. It doesn't have the volume to fill a room, but it's loud enough to serve for two or three people huddled around the projector, which is where you'll most likely be if you're playing games.

Brightness. I measured the PT105 in its brightest mode at 79 lumens, or about 5% more than its rating. Standard mode was 44 lumens, and video mode, which I used in most of my tests, was 53 lumens. With the lights out, I found video mode bright enough to settle on a 63" diagonal image for comfortable viewing. With moderate ambient light I dropped the size to 45" diagonal.

Connectivity. The PT105 offers three sets of connectors. The back panel includes a VGA port for a computer or component video along with three RCA phono plugs for composite video and stereo audio input. In addition, there's an HDMI port on the right side.

Optoma supplies a combination composite video and stereo audio cable. However, you'll probably want to take advantage of the HDMI port, which means you may want to order a cable when you buy the projector. If you want to connect to the VGA port, you'll need a VGA cable or a component video cable and adaptor as well.

No zoom. With no zoom lens on the PT105, the only way to adjust image size is to move the projector. This shouldn't be a problem given the light weight. However, if you want to hear the low-volume audio, you'll have to move with the projector when you adjust the image size. I measured a 45" diagonal image from 7.3 feet, and a 63" image from 10.2 feet.

No remote. Optoma doesn't provide a remote for the PT105. You have to use the buttons on top of the projector to adjust volume, change the source, or change menu settings.

Rainbow artifacts. xssRainbow artifacts are potentially an issue for any single-chip DLP projector, and particularly for projectors that use LEDs. For the PT105, that translates into showing rainbows relatively often. If you see the rainbows easily, as I do, odds are you'll find them annoying for watching a full length movie. However, they show up far less often in games than in video. You'd have to be even more sensitive to them than I am to consider them a problem for game playing.

Although the Optoma PT105's price, technology, and resolution make pocket projectors the most appropriate point of comparison, that's only because there's nothing else quite like it. It's not even close to a pocket projector in size, and there are some important differences in functionality. It's much easier to set up, for example, thanks in part to its use of standard connectors instead of proprietary connectors and separate adaptors.

Much of the PT105's advantage in image quality comes from its lens. In fact, the lens is not only higher quality than any lens on a pocket projector, it is easier to focus, mostly because the larger case has room for a more easily controllable focus wheel.

Compared to more mainstream projectors, the PT105 offers low brightness and low resolution, but it also offers a much lower price. More importantly, the brightness and resolution are good enough for the intended purpose and a good value for the price. If you want a very inexpensive projector you can setup quickly for a game playing session the Optoma PT105 is a more than attractive possibility.

The only problem? It died before I even reach the 10 hours mark. Sent it back to the service center, it worked like a charm. Brought it back home, it refused to power up. But once in a while, it will work. I tried different power sources, different connectors, even different locations, and if I get lucky and it is in a good mood, it will work. On most days, it just likes to play dead.

The problem turned out to be a faulty power adapter. I found that out with the help of a friend. Bought a replacement at a local electrical shop. Everything works fine.

Also, Optoma doesn't seem to like responding to customer e-mails. It's like, my problem is not a problem and their defective product does not warrant any attention.

So, guess who will never buy another Optoma projector ever again? I'll also not recommend anyone to buy anything from a company that doesn't care about their customer or their own defective products.
reply to Jacky Chong Posted Jun 12, 2012 4:49 AM PST
You say **Optoma is one of the leading projector manufacturer in the world, so I have no idea what is happening.**

Hmm,but exactly about optomas projector most of complains, most trouble then with other brands like Acer, Lg........
yaz Posted Aug 4, 2013 1:25 AM PST
so if i wanted to hook this up to an xbox 360 how would i get sound out? would i be able to use the hdmi input or would i have to go component and lose some video quality?
Reed Posted Jan 11, 2015 9:08 PM PST
The picture is beautiful for the price (HDMI), but frankly, this model's focus wheel seems to have a slight flaw that makes your image continuously go out of focus. From the comments I've seen across the interwebs, the complaints are similar: no matter how finely you adjust the wheel, your image will become slightly blurry (enough to distract from your experience) after roughly 20-45 minutes. Additionally, some users note that half of your image appears slightly sharper than the other half, no matter your adjustments. Regarding the focus wheel, I know of no trick/hack to correct this problem. I've opened my projector, taken the wheel out/apart, cleaned it, tightened screws, and have even tried to modify the interior of the case with something to either "catch" the lens or make it sticky to prevent slippage. I've even tried the simple solution of putting duct tape over the wheel after setting it. All to no avail! Simply put, if you plan to use it for anything exceeding 30 minutes, expect to get up from your chair and adjust the wheel. Kid-friendly, adult-irritating.