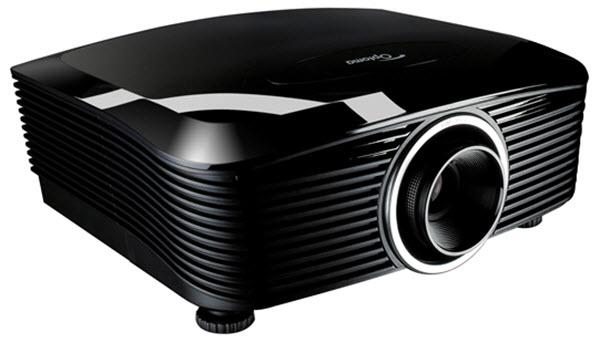 If you need a projector for a large conference room, lecture hall, or small auditorium, and want one bright enough to let you leave the lights on, the Optoma TW775 can easily fill the bill. Built around a DLP engine with a WXGA (1280 x 800) native resolution, it's rated at 4500 lumens and delivers a measured brightness close to the rating.

Near excellent image quality for data. Data image quality on the TW775 was just short of excellent, with only minor issues. Yellow was a little mustard colored, which is common in DLP projectors, but colors were generally attractive, fully saturated, and vibrant. Similarly, white text on a black background was almost impossible to read at the small sizes that might show up in, say, a spreadsheet. However, black text on a white background was easily readable at the same sizes, and, of course, black on white is what you're most likely to use.

Data images were excellent in almost every other way, from edge to edge sharp focus, to absolutely neutral grays at all shades from white to black, to showing little to no pixel jitter with an analog VGA connection even on images designed to bring out pixel jitter. For photos (as well as video), the image was visibly lacking in contrast, even with theater dark lighting, but that's not surprising, since Optoma claims only a 1500:1 contrast ratio. It's fair to say that the colors don't pop, but they're in within a reasonable range of reality, and the projector did a good job retaining detail in both dark and light areas as well as otherwise avoiding any notable problems.

Better than par video quality. Image quality for video was above par for a data projector, at least when using an HDMI cable and setting the source for 1080p to upconvert standard DVDs. As with photos, the projector did a good job retaining detail in dark areas, and even in scenes that are prone to showing posterization (with shading changing suddenly where it should change gradually) it showed only the slightest touch of a problem. You'll want to stay with 1080p input for video, however. Composite video is never recommended if you want the best picture quality, and it is particularly true of this model.

Bright image with good uniformity. We measured the TW775 at 4431 lumens. That's about 98% of it's rating and easily bright enough to throw a big, bright image that can stand up to ambient light. It also scored well on brightness uniformity, at a measured 74% and no noticeable variation across the screen even with a solid white image.

Wide range of brightness levels. High brightness isn't always a good thing. The TW775's brightest setting is a good choice for a large image or a brightly lit room, but with the roughly 95" diagonal, 16:10 image we used for testing, it was too bright to view comfortably in a dark room. For smaller rooms or low light conditions, the TW775 offers five additional preset modes, which we measured at 1565 to 3849 lumens. In addition, the eco mode drops the brightness by about 17%, all of which gives you a wide range of brightness levels to choose from. Eco mode also saves energy, lowering the power draw by about 13%, from 400 to 338 watts in our tests. According to Optoma, it increases lamp life too, from 2000 to 3000 hours.

Flexible placement, with a choice of lenses. We tested the TW775 with the standard lens, which offers a recommended projection distance of 4.9' to 23', a recommended diagonal image size of 34.2" to 200", and a 1.25x manual zoom. The long throw and short throw lenses differ from the standard lens in every one of these specifications. Between the three lenses, however, the recommended projection distances range from 1.6' to 65.6' and the recommended image size ranges from 28" to 457", giving you tremendous flexibility for choosing an image size and placement for the projector. In addition, the projector's lens shift range with the standard lens is plus or minus 10% of the image width horizontally, and minus 20% to plus 60% vertically. This give you still more placement flexibility.

Excellent connectivity. The back panel of the TW775 includes nearly every type of connector in the projector universe, starting with two VGA ports that can each connect to either a computer or a component video source. You'll also find an HDMI port and a DVI-D port that each offer digital connections for a computer or video source and a VGA pass-through port to let you connect a monitor. Still other choices include a set of five BNC connectors for component video, a set of three RCA phono plug connectors for component video, a phono plug for composite video, and an S-Video port. One of the VGA ports can also be used for a SCART connection.

For audio, each of the VGA ports and the set of BNC connectors is paired with its own mini jack stereo audio input (or output in the case of the pass-through port). Similarly, the set of phono plugs for component video is paired with a set of stereo phono plugs, and the S-Video and composite video ports share a single set of stereo phono plugs. The HDMI port, of course, already includes audio. (There is no audio port to go with the DVI-D port.) Having all of these audio inputs lets you plug in an assortment of computer and video sources along with audio from each, and automatically switch the audio when you switch sources.

Finally, the projector includes a USB connector so you can connect to a computer and control the mouse pointer from the remote, both RS-232 and LAN connectors to let you manage the projector from a computer or a control box, and two 12 volt triggers. The most likely use for one trigger would be for lowering and raising the screen. Few situations can actually take advantage of two, but the second one is there if you need it. With all of these connectors, it's hard to picture a situation where the TW775 will leave you wishing for more.

Better than typical audio. The TW775's stereo sound system, with two 3-watt speakers, delivers better than average sound quality for a data projector and enough volume to fill a medium size conference room. If you need more volume, the audio out port makes it easy to connect to an external sound system.

Excellent warranty. Optoma offers a longer than usual warranty, at 3 years for the projector and a full year for the lamp. You also have the choice during the first year of getting a replacement unit immediately, or getting a loaner while Optoma repairs the original unit. After the first year, the loaner is the only choice.

Not totally 3D-ready. There are a number of competing 3D schemes, so when a manufacturer says its projector is 3D ready, you have to ask which 3D technologies it's ready for. Without getting into details, the variations emerging as most important for projectors for home, education, and business all require a 120 Hz refresh rate. The TW775 offers 120 Hz at resolutions up to and including 1280x720, so in that sense it's 3D ready. However, that's not the whole story.

Optoma says the TW775 works with TI's DLP-Link, which means it can show 3D if it's connected to a computer with a Quadbuffered, Open GL 3D-compatible graphics card. Unfortunately, we didn't have a 3D computer on hand for testing, so we can't confirm that it works.

We tried testing with a Sony PlayStation 3 with upgraded firmware for 3D. However, the PlayStation wouldn't run in 3D, saying that it couldn't find an appropriate display. Optoma confirmed that the projector currently works only with computers, but also says it's working on ways around the limitation. For the moment, then, the 3D capability is partial. It may or may not turn out to be useful when you're ready to show 3D content, depending on what you want to show and assuming you're willing to buy enough glasses to accommodate your audience (they are currently more than $100 each). Even so, given that the 3D feature is essentially free -- because it's built into the DLP chipset and doesn't increase the projector cost -- there's certainly no harm in having it.

Color breakup (rainbow artifacts). Because single chip DLP projectors show only one primary color at a time, they have the potential for what's known as the rainbow effect or rainbow artifacts. If a light area surrounded by a dark area moves on screen or you move your eye, each primary color can hit a different part of your retina, and you may see the individual colors as little red-green-blue rainbows.

The TW775 is easy to recommend, with its long list of strengths and notably few weaknesses. It can connect to just about any source; its high brightness makes it a good choice for large venues from boardrooms to small auditoriums; and its range of brightness levels and choice of three lenses gives it the flexibility to be a good fit in almost any physical layout. For large venues, the combination makes the TW775 hard to beat.

For more detailed specifications and connections, check out our Optoma TW775 projector page.

Comments (1) Post a Comment
Jmal Posted Aug 3, 2010 3:19 PM PST
"Optoma confirmed that the projector currently works only with computers, but also says it's working on ways around the limitation".

Have optoma said when this "get around" for the PS3 3D will be available?