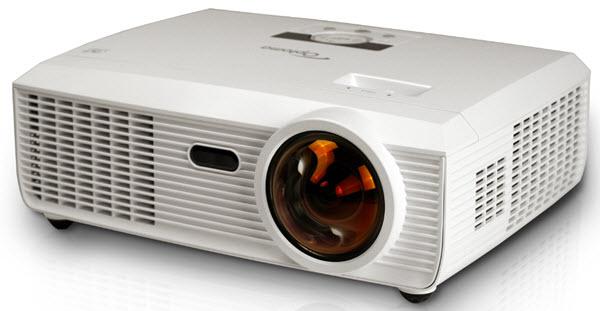 The Optoma TW610STi is one of the more impressive interactive short throw projectors available. Built around a 1280x800 DLP chip and using TI's approach to interactivity, it shares some strengths with other projectors that use TI's interactive technology. However it delivers enough extras to let it stand out from the pack.

TI's interactive approach offers two advantages. There's nothing to calibrate, and the pen only has to see the screen, rather than touch it, which means you can use any surface as a screen.

Beyond these basics, the TW610STi offers higher brightness than most interactive short throw projectors, with a 3100 lumen rating and measured at 95% of the claim, and it maintains an unusually high percentage of brightness in interactive mode. It delivers high quality data images, good quality video for a data projector, and surprisingly high quality audio for its light weight and portable size. It's also one of the few projectors that lets you turn on both interactivity and 3D at the same time.

As with any interactive projector, finally, the TW610STi is much less expensive than an equivalent non-interactive model plus an interactive whiteboard would be. That, along with its combination of features, makes it a more than attractive choice at $999 street. Interactivity with almost everything you need. As is typical for the breed, the TW610STi comes with one pen, which will work with virtually any interactive software and also let you control your computer's mouse. If you don't already have an interactive program, you can get WizTeach from Optoma, for $199 street, which Optoma says will let you use two pens at once. The second pen costs $99 street price.

No calibration. TI's approach to interactivity overlays a grid on the image. Although it's invisible to the human eye, the pen uses it to tell the TW610STi where you're pointing. This eliminates the need for calibration -- an obvious advantage if you move the projector, but also an advantage in a permanent installation, since you won't have to calibrate when you change resolution.

Can use any surface. Since the TW610STi's pen doesn't need to touch the screen, you can use literally any surface, from rough cinderblock that could harm a stylus to a screen suspended from the top without a solid backing.

Excellent mouse control from a distance. In my tests, the TW610STi's pen worked from as far as 30 feet from the screen. Despite being a good pointer at 30 feet, however, it's hard to give mouse clicks even at 10 feet, since clicking tends move the pointer off the target. This is normal when using interactive pens from a distance. What's not normal is that the TW610STi also lets you use its remote for mouse control, making it easy to double click even from 30 feet away.

Short throw. All short throw projectors can project big images in small spaces. The added advantage for interactive projectors like the TW610STi is that you can get close to the screen without standing in front of the projector and casting a shadow. For my tests at the native 1280x800 resolution, I measured a 93" diagonal image from 3.3 feet and a 31" image from just over 13". This is a little closer than Optoma's claimed range of 44.6" at 1.6 feet to 223" at 8.2 feet.

Excellent data image quality. Despite some minor flaws, the TW610STi's data image quality is excellent. Colors in my tests were well saturated and suitably vibrant in all preset modes, although just a touch dark in terms of a hue-saturation-brightness color model. Yellow approached a mustard color with most of the presets, for example, but it stayed a more convincing yellow than with many DLP projectors.

The TW610STi also scored well on most other measures. There was no hint of color in any shade of gray with most presets, and barely a hint in the midtones in Bright mode; text was crisp and readable at sizes as small as 7 points; and I saw only a hint of pixel jitter with an analog connection on screens that bring out jitter.

Usable video quality. The TW610STi's video quality is good enough to be usable, which is more than many data projectors can manage. I saw some posterization (shading changing suddenly where it should change gradually) and moderate problems with shadow detail, but both were obvious only with scenes that many data projectors do even worse with. Most scenes on both DVDs and Blu-ray discs offered good enough quality to make them watchable, though not impressive, for a movie-length session, unless you're sensitive to rainbow artifacts.

Potentially portable. At just 6.9 pounds, the TW610STi is light enough to bring with you on the road at least occasionally. However, you'll have to buy a carrying case separately, since Optoma doesn't supply one.

Surprisingly good quality audio. Unlike most projectors in its weight class, the TW610STi's offers both good quality sound and enough volume, with two 5-watt stereo speakers, to easily fill a small conference room. For larger rooms, the audio output lets you connect to an external sound system.

Brighter than expected. We measured the TW610STi at 2937 lumens, or 95% of its 3100 lumen rating. The surprise, however, was how little brightness it lost in interactive mode and eco mode, called Std. Interactive mode came in at 2756 lumens, Std mode at 2535 lumens, and both together at 2369 lumens. That works out to only a 6% brightness drop for interactive mode and 14% for Std mode, with Std mode increasing lamp life from 3000 hours to 4000. Even with both modes on, the TW610STi was easily bright enough in my tests for the 93" screen size to stand up to a moderate level of ambient light. For lower light levels or smaller image sizes, other presets range as low as 981 lumens in Bright lamp mode with interactive mode off.

Acceptable brightness uniformity. The TW610STi scored only 62% for brightness uniformity across the screen, which is typical for short throw projectors. However, this isn't an issue for real world use. Although the difference shows on a solid white screen, the brightest and dimmest areas are far enough apart to hide the difference when the screen is broken up by text or graphics.

Good connectivity. The TW610STi's back panel offers a reasonably full set of connectors, including an HDMI 1.3 port for a computer or video source, two VGA inputs for computers or component video, and both S-Video and composite video ports. Still other ports for image sources include a mini-USB B port for USB display and a USB A port you can use either for connecting Optoma's $29 WiFi dongle or for reading JPG, TIF, BMP GIF, and PNG files directly from a USB key.

Audio ports include three miniplugs for stereo input, stereo output, and a microphone, plus one set of stereo RCA phono plugs paired with the S-video and composite video ports. Also included are a 12V trigger, a pass-through monitor port, a LAN port for both sending images and controlling the projector over a network, an RS232 port for controlling it locally, and a second mini USB port to connect with a computer for interactive mode and for controlling the mouse with the remote.

Obvious rainbow artifacts for video. Rainbow artifacts are always a potential issue for single-chip DLP projectors. Some people see them more easily than others. With the TW610STi they show up often enough in video that anyone who is sensitive to the effect may well consider them annoying.

Auto-iris lag. The TW610STi's Image AI setting for lamp brightness serves works like an auto-iris to make dark images darker. This works well enough for data images, but is best turned off for video, since there's an annoying lag between changing a scene and the projector changing brightness.

Unfortunately, the feature also seems to kick in spontaneously when it's off. In my tests, when I showed a particularly dark screen and changed the preset from Bright to Movie and back to Bright, the lamp switched from Bright mode to Std, and stayed there when I moved back to a brighter screen. This is likely due to a glitch in firmware, so Optoma may be able to fix it. I also saw another odd behavior apparently due to firmware, with the projector sometimes turning on in grayscale mode, a choice that doesn't exist in the menu system. Changing to a different preset and then back turns the color back on, however, so it's not much of an issue.

Limited 3D. The TW610STi's 3D works directly only with computers, although it will also work with video converters that convert 1080p Blu-ray 3D to 720p 3D. Its real limitation, however, is the need to buy enough pairs of DLP-Link glasses (at $70 or more per pair) for your audience. That said, 3D is potentially useful, and the TW610STi is one of the few 3D-ready interactive projectors that lets you turn on interactive and 3D modes at the same time.

The TW610STi shares some of its strengths with every other short throw projector built around TI's approach to interactive technology. However, it's one of the few with 1280x800 resolution, and it's one of the brightest in the batch.

More significantly, the TW610STi does an unusually good job of delivering on its promises. In particular, it loses very little brightness when you turn on interactive mode, eco mode, or both, making it far more capable than most interactive projectors of standing up to ambient light.

The projector also earns lots of points for its data image quality, with extra points thrown in for video and audio quality. And add still more for such niceties as mouse control through the remote and the ability to turn on both 3D and interactive mode at the same time. All this helps make the TW610STi a more than appealing choice, and one that should wind up high on your short list.

For more detailed specifications and connections, check out our Optoma TW610STi projector page.

Comments (1) Post a Comment
mstarehe Posted Jul 19, 2012 3:15 AM PST
May i know how to connect the projector directly to a usb stick. What mkind of cables can enable me connect to the projector without problem.?