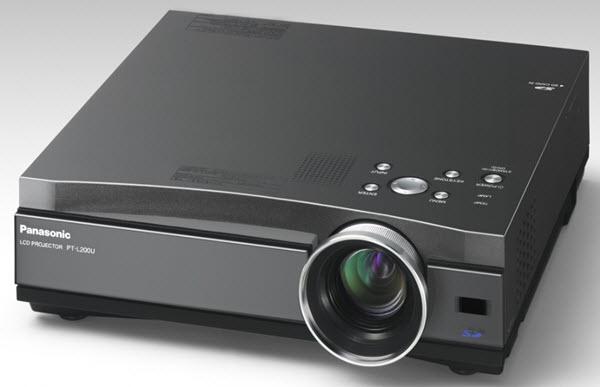 this is a nice projector for the money.$999.00.as a starter its great. save your money buy this guy you cant go wrong. thanks projector central reviewers.

Any Problems: no problems

I returned my X1 because of its rainbows and bought an l200U. Well, this baby is just a clear winner over the X1. It is brighter, smarter, better looking for the same price. the 16:9 native ratio is great for movies. (if you need it for presentations, the X1 is better; the Panasonic because ots screen ratio won't show great text in presentation mode, but this is a home theatre projector and movies are what it shows great) I use my pt-l200U with my laptop connected to wach MPEG4 (DIVX) movies or DVDs. It is just great, really, I couldn't be happier, especially for the price: $999. If You need a great cheap movie projector and you are hesitating if the X1 is right or not, I can tell you, it has rainbows, so you'd better take the panasonic.

Any Problems: none ps: it has a very little screendoor, can helped with the "lens out of focus" tunning which doesn't harm the movie experience... trust me, I am a movie fan!

I've owned this projector for 6 months now and I couldn't be happier. I had the Sanyo Z1 but returned it due to color uniformity problems, a common complaint with this PJ. No such trouble with the Panasonic. The Panny does have slightly more screen door effect than the Z1 but not as much as I expected considering its lower resolution. As others have stated, it's easy to minimize this almost to the point where you don't notice the screen door at all after a while. There aren't as many picture adjustments on the Panny compared to the Z1, most notably, you cannot individually control the red, green, and blue levels. I bought a glass polarizing lens which has helped the picture quality tremendously in terms of contrast and green level. The picture with DVD through component inputs is outstanding considering the price. My friend has a X1 and we agree that both pictures are quite comparable. The unit itself is fairly quiet and non-obtrusive. TV viewing at 4:3 with digital cable and the VGA input is very good but not great, however. Definitely better than my old 36" tube TV but not as good as I expected. I haven't tried HDTV or the S-video input. Lighted remote is a nice feature. If you're not convinced yet, the estimated lamp life is 3000-5000 hrs. easily making the Panny the best long-term deal in my opinion. If you're looking for an affordable projector for mainly watching DVDs and occasional TV viewing, then you can't go wrong with the Panasonic.

Any Problems: Had a problem once where the unit would turn on for only a couple minutes then shut down unexpectedly. After a few tries, I turned off the power switch on the PJ itself (I usually leave it in "standby mode") for a minute then back on and it's worked flawlessly ever since. Weird.

The 1-year warranty on it scared me away from buying it sooner. I don't think there's anything to worry about. This unit is built very sturdy, it survived a 4-foot drop the first week I owned it and doesn't show anything wrong but a scratched up corner and a chip in my laminate wood floor! Picture is just awesome. I'm happier than I would be with my neighbours 2500$ projector.

Any Problems: The screen door is definitely noticeable on my 16 foot diagonal projected picture, but only in parts of a movie where it's bright with no motion going on. Like another reviewer mentioned, just set the focus slightly 'soft' and you won't notice at all, unless you really try hard. It's definitely not worth paying almost twice the price to get the L-300.

Great projector for the money. I only pay 1,099.00 with a free 77inch screen.This projector cost less that my 43inch hitachi HDTV and I get a bigger picture. You can't go wrong with this projector. You will be amaze at how good the picture look out of the box.So don't be afraid to buy. You will be very,very happy with it. I am :)

Any Problems: No problem so far. :)

Pick it up around 1K with 77" free Da-lite screen from projetorpeople. Hell of a lot of pretty pictures!! I compared to Dwin 10K projector. NO FACE LOST! Buy it or Lost it.

Any Problems: Too nice of picture with component input/silver cables.

This projector is a phenomonal bargain for the money. I have the projector set up on a freshly painted white section of a wall, making a 90" diagonal 16:9 image. After calibration, the picture is bright and vibrant, with saturated colors. Even with a little bit of ambient light, the picture remains clear. It could be used to make a larger image, but I preferred to maintain brightness and a lack of pixelation. There is no "screen-door" effect due to the screen size and a slight nudge of the focus to soften the edges. There are no dead pixels to be seen anywhere. This projector is ideal for "pixel-perfect" viewing of DVD movies and video games. The video is very clean particularly when using component video with a progressive scan DVD player. This was a good purchase, and a bargain considering it makes a beautiful 7.5' image for twice the price of a 32" TV. Buy it for $1100 at B&H Photo-Video.

Any Problems: There is a very faint dust bleb that appears as a greenish ghost, and can only be seen when the screen is completely black. It disappears when there is video playing, and it should disappear permanently when I clean the dust off the LCD.

I bought this projector after trying out the Infocus X1. The X1 was a great projector but i just could not get past the native 4:3 light output. I really wanted to get the 300u but since it was out of my budget i thought i would try the 200u out. I am really impressed with the picture. I have watched several movies on it and have yet to be bothered by screen doors. I would recommend this projector to anyone who wants a great home theater with a limited budget.

Any Problems: Took a lot of tweaking out of the box to get it right where i wanted it. It was worth the effort though.

Amazing quality picture for less the its brother PT-L300. Save your money and purchase the PT-L200 you will see little difference. Panasonic in my opinion is the best projector under $5K. Also, great bulb life especially when they cost more that $400. Blows away Sanyo Z1

Any Problems: None so far

After 30 hours of use over 3 weeks, watching 10 different movies, I love my PT-L200U. It really rivals its big brother PT-L300U in color fidelity, brightness, contrast and ease of use. I compared the two units at RitzAV for over 3 hours, using various picture settings, distances and screen sizes. It has a minor screen door effect that can easily be mitigated by turning the focus ring just slightly "out of focus." This softens the image, making it actually look better and more film-like as in a movie theater, instead of video on a TV display screen. So save yourself $600 that you can spend to upgrade your other HT components. I did. By the way, the service and price at RitzAV is outstanding!

Any Problems: No bad pixels, super quiet unit. No problems at all to report.

The picture quality is awesome.. when the component video is used. And for the price.. you can't beat, especially rated for 5000 hours lamp life at low power mode. There is only slight diffence when using at a high power mode. ApexVisual is the cheapest around, got my for $1397 including shipping... good deal!

Any Problems: Nothing to report...