The Philips PicoPix Max's contrast and color accuracy are best described as good enough, but it's small, light, easy to set up, and can run on batteries for long enough to watch a full-length movieâall features that will appeal to anyone who needs a portable projector, whether for home or business use.

Philips targets the PicoPix Max PPX620 for consumer use, with features that include Aptoide streaming apps and a battery that lasts long enough to watch a full-length movie. However most of the features can come in just as handy for road warriors, not to mention anyone who wants a portable business projector they can also use at home. The $899 list price is a little hefty, but it's widely available at this writing for $699 or less.

The PicoPix Max is clearly the product of top-notch industrial design. The piano-black case—which measures 1.9 x 5.4 x 5.3 inches (HWD) and weighs 1.9 pounds—offers rounded edges on both sides, excellent fit and finish, and a control panel on top, complete with a touch-pad for navigating through menus—a highly welcome alternative when you've misplaced the remote.

The bottom includes two rubber feet that extend nearly the entire length from front to back, making enough contact to keep the projector from sliding out of place. It also has a mount for the included table-top tripod, which gives you an easy way to tilt the projector when needed to aim at the screen.

The PicoPix Max offers 1080p native resolution, but can also read UHD (3840x2160) files—from USB memory, Micro SD Cards, and its 16GB internal memory—and downconvert them to its native resolution. It can also accept 3840x2160/30 Hz input through its HDMI and USB C ports. However it supports HDCP 1.4, not the 2.2 version that virtually all 4K movie discs require. As with most portable projectors, the PicoPix Max uses an LED light source, rated at a fairly typical 30,000 hours in its Normal power mode. 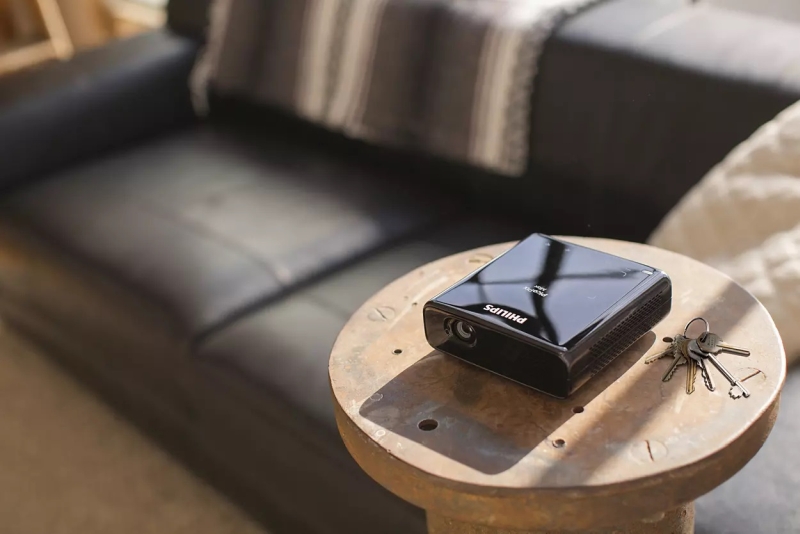 Physical setup is unusually easy, thanks in large part to an autofocus feature that's on by default and produced a sharp image in my tests nearly every time. It reduces setup to turning the projector on, connecting it to an image source, and pointing it at the screen. You can also screw in the tripod and connect the power cable, but the tripod is optional, and—thanks to the built-in rechargeable battery's 3.5-hour life in Energy Saver mode—so is the power cable. There is no optical zoom, but as with any projector this small, it's easy to move the projector to adjust image size.

In addition to connecting by HDMI cable and reading files from USB memory keys, micro SD cards, and the internal memory, you can connect by USB-C cable, and can connect by Wi-Fi to a network or directly to iOS or Android devices for screen mirroring. You can also use Aptoide apps stored in the projector, and add more from the Aptoide store, to stream video.

As with some other Aptoide implementations we've seen, we ran into some issues with the PicoPix Max's version. The projector ships with about a dozen apps installed, including Netflix, YouTube, File Manager, Media Player, and a Firefox browser. In my tests, the utilities worked well. File Manager found files on a USB key, for example, and offered Media Player as one of the choices to view photos. When I tried the preinstalled YouTube, however, I got an error message that it was missing a needed file, and when I tried downloading the file, I got the error message that for security reasons the system wouldn't download it. 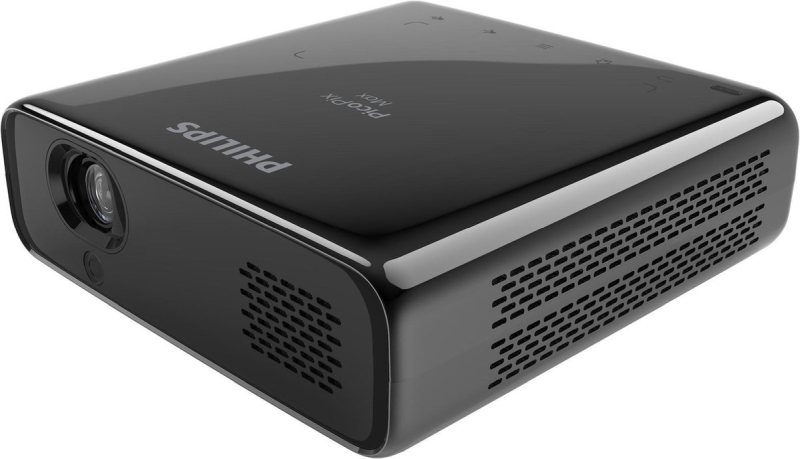 After trying several times, I eventually got the YouTube App working. But the easier workaround was to go to YouTube using Firefox. If you want to take full advantage of streaming, you might consider ignoring the Aptoide apps and plugging in a streaming HDMI dongle instead. However, Philips says the USB 2.0 port it isn't designed to power dongles, and although it provides enough power for some, it doesn't provide enough for others. (In that case, you'll need to plug the dongle's own power adapter into a wall outlet or power bank.)

With the PicoPix Max on a table, the bottom of the image is at roughly the centerline of the lens. If you need to tilt or swivel the projector to point at the screen, you can square off the image using manual or automatic keystone correction.

Philips doesn't publish a lumen rating for the projector. I measured it at 343 ANSI lumens in its brightest power mode—Presentation. That makes it bright enough to fill an 84-inch diagonal, 16:9 aspect ratio screen in a dark room, based on Society of Motion Picture and Television Engineers (SMPTE) recommendations, or a 53-inch screen in moderate ambient light using a 1.0-gain screen. Normal power mode, which delivered better color accuracy and which I used for most viewing tests, came in at 251 lumens, dropping the recommended image size to 72 inches for a dark room and about 40 inches in moderate ambient light.

As we've pointed out in other reviews, however, images produced by LED-based projectors can register subjectively as being brighter than the ANSI lumen measurements suggest. (For the reasons why, see the ProjectorCentral article Are "LED lumens" a Real Thing?) Using Normal mode, the sizes I wound up with as subjectively comfortable for extended viewing were 72-inches in a dark room, and 60-inches in a family room at night with room lights on. The throw distance for the 60-inch image was 5.2 feet. (For the distance for the screen size you want, see the Projector Central Philips PicoPix Max projection calculator.)

Note also that the PicoPix Max includes a set of two 4-watt stereo speakers. The sound is a bit tinny, but high enough volume to be potentially useful in a small room. You can also connect headphones or an external speaker or audio system using the 3.5 mm analog audio out port or connect wirelessly to Bluetooth speakers or headphones. 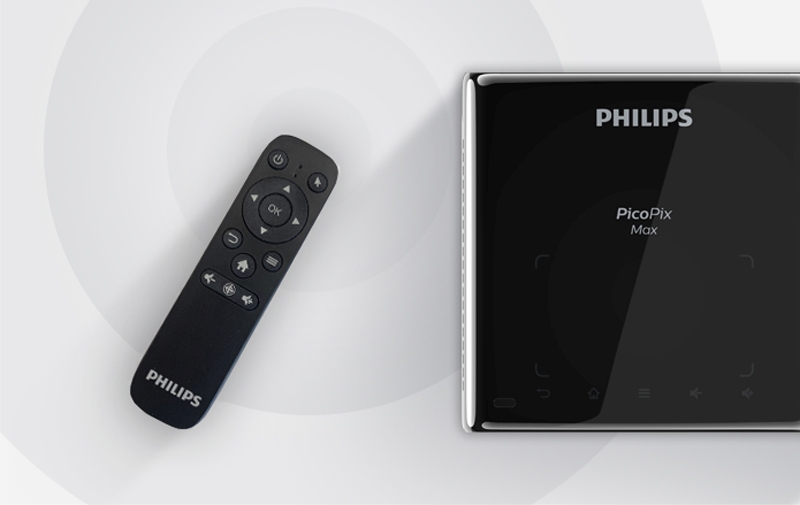 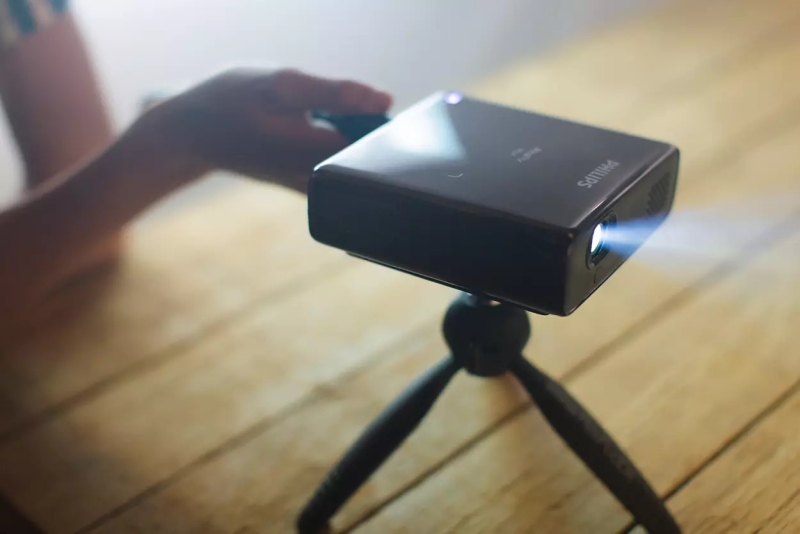 Presentation Viewing. The PicoPix Max doesn't offer any choices for predefined color modes or any options to adjust color. However, there are three power modes—Energy Saver, Normal, and Presentation—and Philips says the color for each power mode is adjusted individually. I saw significant differences in color between the Presentation power level on the one hand and the Normal and Energy Saver levels on the other. Presentation mode's extra brightness makes it the preferred choice for most business presentations that don't include many photorealistic images, but its color accuracy is off by enough to make it the wrong choice for movies or video. In business graphics, blues were distinctly cobalt blue. And both it and green were oversaturated and overly bright. Photorealistic images showed a green bias, most obviously in skin tones.

Film and Video Viewing. I saw no obvious color differences between Normal and Energy Saver modes, which makes Normal the preferred choice for photos, film, and video thanks to its higher brightness. Most hues were more accurate in Normal mode than in Presentation. For graphics, blues and greens were still a little too vibrant, but not by as much. And for photorealistic images, the green bias didn't show as consistently or as green shifted. It was more of a yellow shift with a slight green tinge.

Most important, the color shifts in Normal mode weren't as immediately obvious as the shifts in Presentation mode or as annoying, and most people will consider the level of color accuracy acceptable.

For my viewing tests, I included movies on Blu-ray discs and a variety of broadcast and streaming TV shows, and I ran the tests both with and without ambient light. In every case, the image quality—including color accuracy and contrast—was easily good enough to use for short video clips in presentations. Most people would also consider it more than acceptable for ad hoc setups for watching anything from broadcast TV to full length movies.

The PicoPix Max handled dark scenes in movies impressively well. In my go to dark scene in Batman v Superman, when we first see what will become the bat cave, it delivered a more visually dramatic rendering in a dark room than some entry-level home theater projectors. Contrast, black level, and sense of three dimensionality were surprisingly good for a portable LED projector, and it held shadow detail so well that I could make out every individual bat.

Bright scenes tended to have poor enough contrast to be noticeable in any lighting conditions, but it was still at a level where most people will find it acceptable. Color accuracy is best described as good enough. Some colors in scenes I'm familiar with were a little off, but still within a realistic range.

The slight yellow bias I already mentioned was noticeable only in some scenes, apparently depending on how they were lit. On news-discussion shows from MS-NBC to Fox, for example, skin tones on some faces looked fine while some looked a touch yellow-green on the same Zoom-based split screen. Very much on the plus side, I saw very few rainbow artifacts. 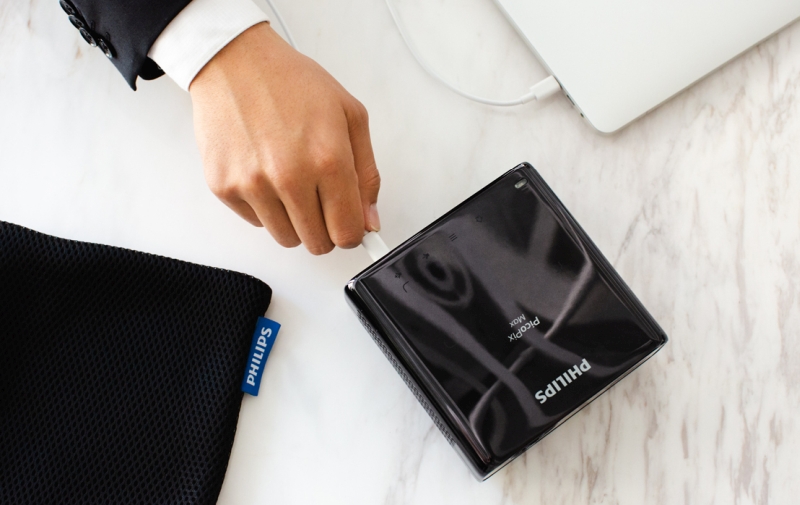 The PicoPix Max PPX620 is meant to be plug and play, and it succeeds nicely on that score. Setup is supremely easy, thanks in large part to the autofocus consistently delivering a sharp picture. As with any projector in this size class, the level of color accuracy and contrast won't satisfy videophiles, but both are good enough by most people's standards to make video and movies highly watchable. Business users will appreciate the vibrant color for graphics.

The compromise you have to make with the PicoPix Max is that you can easily find lamp-based projectors with higher brightness, better color accuracy, and better contrast for the same price. However, they won't be as portable or rugged, they won't have batteries, and they won't have the features that make the PicoPix Max so easy to set up and use. If you need to maximize portability, the winner in that comparison will usually be the Philips PicoPix Max.

Brightness. I measured the PicoPix Max at 343 lumens. There are no color presets with varying brightness levels, but there are three power modes each for AC power and for battery power. The measured ANSI lumens in Presentation, Normal, and Energy Saver power modes are as follows.

Rainbow artifacts. The PicoPix Max did an excellent job of avoiding showing rainbow artifacts in my tests. Despite being someone who sees these artifacts easily, I saw only a few in all my testing. That said, as with any single chip projector, if you're concerned about rainbow artifacts, be sure to buy from a source that will allow easy returns, so you can test it out for yourself.

Fan Noise. Philips doesn't publish a rating for the PicoPix Max's fan noise. However, even in Presentation mode, the noise is low enough that you have to make a point of listening for it to hear it even sitting right next to the projector in a quiet room. There is no high altitude mode. The fan speed varies automatically based on internal temperature.

Comments (2) Post a Comment
Michael Posted Feb 28, 2021 3:41 AM PST
I tested the Philips PicoPix Max One PPX520, which is mostly the same hardware but no "smart" OS. The noise is very noticeable even in standard mode, only in economy is it silent. So I am surprised to hear that the PPX620 is supposed to not be noisy.
esal Posted Sep 10, 2021 5:22 PM PST
Great projector, I love it, but do wish it were brighter.